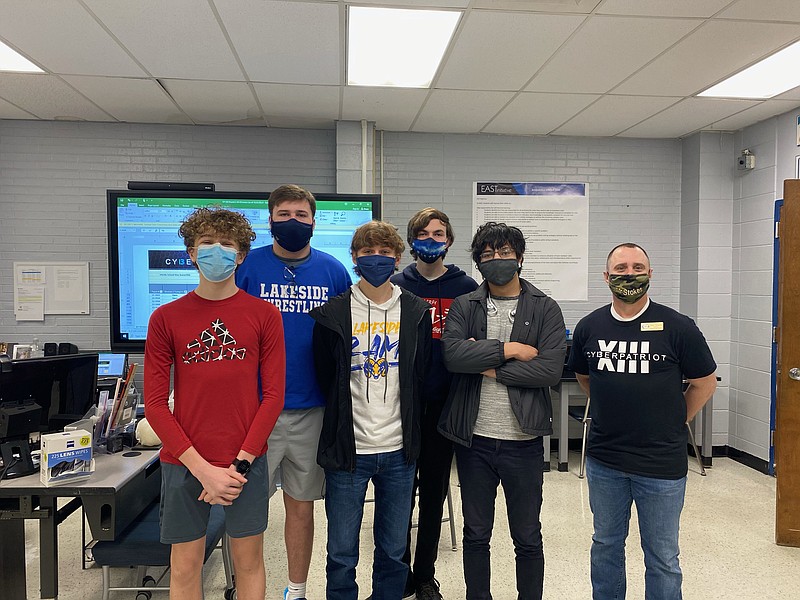 The Lakeside EAST team recently reached platinum team status, placing it in the top 25% globally, in the national CyberPatriot competition.

"CyberPatriot is the National Youth Cyber Education Program created by the Air Force Association to inspire K-12 students toward careers in cybersecurity or other science, technology, engineering, and mathematics (STEM) disciplines critical to our nation's future," the CyberPatriot's website said.

"It's great. It's our second year in a row. Last year was our first year; of course, we ended up being state champs after that, through hard work. We had no clue what we were doing when we started, and the progress from last year to this year is just insane how much we've improved," 11th-grader Evan Meyers said.

"For me personally, it shows that our work and dedication to this competition has really paid off. We've made it from the first-year team, who's just state championship in a gold tier division for Arkansas, to the Platinum division in the top 25% of people globally," he said. "All of our improvement comes from our team and our coach."

Last year, the team was in the gold tier, one of the lowest tiers a team can get. The school is competing against two other schools in Arkansas and with a couple of other schools globally.

Meyers credited the team's hard work and dedication that got them platinum status.

"We've done a lot of research. We have a really good coach. He really enables us to be better," Meyers said.

"We have spent good hours after school hardening our skills," 11th-grader Adrian Arias said. "It's hard work and dedication thanks to our coach (John) Stokes (who) really pushes us to reach that amount of hours and surpass it."

The team tries to meet one day a week and practice for a little over an hour while they also do their own research at home.

The team makes a checklist to put things together that will help them and uses a document with links to different checklists and resources to help them and speed up their processes.

CyberPatriot gives the teams frozen states of operating systems that will have all sorts of things wrong with them, such as viruses, malware, and backdoor reports.

"They don't tell us about anything that's wrong with it. They give us the computer, and they'll tell us there are a bunch of things wrong with it and we will have to fix it. After the competition, they won't tell us what we missed or anything," ninth-grader Wesley Kleinman said.

The team starts by reading the scenario given to them. CyberPatriot will supply the basics of what they will need, what users and administrators are supported to be on there, and who's not.

"After we do everything that we find there. We just go to our checklist and the internet and try to find stuff that could possibly be wrong with it and make sure it's correct," Russell said.

"That's also where our previous experience comes in from last year and the previous rounds this year. We know a couple of things that they're kind of looking for," Meyers said. "Sometimes we get points for them, sometimes we don't. It's not guaranteed, but it's always worth a try."

"I couldn't be prouder of these kids and Lakeside as a whole. They really embraced this model that these students have come in and really accepted the challenge of learning something that they've never been taught before," Stokes said.

"They took the ball and ran with it. They've been very passionate about the pursuit of their excellence in this area. There's no doubt that our progression between gold and platinum is a great result of their efforts," he said.