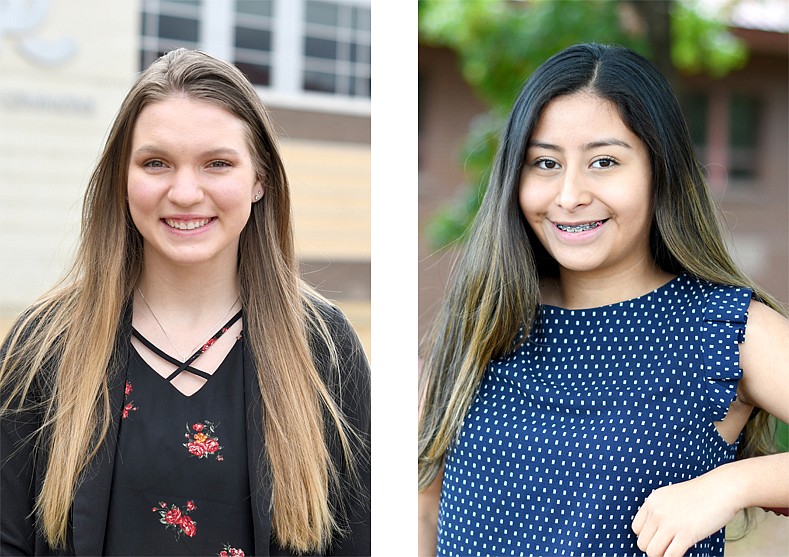 The National Park College Foundation recently announced Melina Romero-Martinez, Alyssa Hall, and Kinzy Pasley as the recipients of the 2021 Van Davis Memorial Scholarships, which will allow them to pursue their Associate of Science degree in Nursing.

"It feels good. I'm very thankful to get the scholarship because it helps a lot. It takes some of that financial stress off of paying for school," Hall said. "I can focus more on school and not have to work as much because that's much less than I have to worry about paying for school."

"It means a lot. My family owns a small restaurant (Los Mayas). It's been really hard to keep the business afloat, mostly because people don't want to wear their mask," Romero-Martinez said.

"People give you all sorts of problems," she said. "I don't want to have to have my family pay for it or have to worry about it."

Hall said she feels she was chosen for the scholarship because of her background. When she started looking into the scholarship, its background information mentioned parents who didn't graduate high school.

"Neither one of my parents graduated high school. I'm a first-generation high school student. I think that had a lot to do with it and then also just my grades. I do work hard in school because it is important to me," she said.

Romero-Martinez, who discovered she had received the scholarship while looking on Oasis, said she was wondering why she was selected.

"I think they probably picked me because I really care about education. I feel like it shows in my curriculum and what I've done. Even though it's my second semester," she said.

For Hall, the scholarship means she can focus more on school and less on school financials, she said, noting, "I know that a lot of time (went into) who gets a scholarship, so it means a lot to me that I was picked."

Education means a lot to Romero-Martinez and her family because her parents did not finish school, she said.

"We're from Mexico, so coming over here and having this opportunity meant a lot to me because I can do something for my family so we can improve. My parents always told me, 'I want you to do better than I did before,'" Romero-Martinez said.

Education is important to Hall because she said she likes to learn and challenge herself, noting she would like to create a better future for herself.

Romero-Martinez decided to go into nursing because she took the medical professions program at the college when she was in high school.

"I've met a lot of nurses, and they've always been so sweet to me. I think that there needs to be more Spanish-speaking nurses because a lot of people don't seek medical attention because they don't know English and they don't have anyone to translate for them. Since it hit close to home, that's why I kind of want to do it," she said.

Hall wanted to go into nursing when she was in the Sweethearts, where she did 145 hours of volunteer work.

"When I got into college, and I was looking for a job, I ended up getting a job as a tech (at National Park Medical Center), and that's what really kind of secured that for me," Hall said.

Pasley said in a news release she wanted to go into the medical field since she was a child. NPC was the perfect choice for her because it is close to home, it is not financially burdensome, and it has one of the best nursing schools in the area.

"This scholarship means a lot to me. It proves that people want to help me further my education and achieve my goals. Thank you," she said in the release.

"The scholarship was endowed with proceeds from the Annual Van Davis Memorial 5K Run/Walk. Proceeds from the race are now used for student success initiatives at NPC," the release said.

This year's event was scheduled for Feb. 13 but has been rescheduled for Oct. 9 at 9 a.m. at NPC. Registration information can be found at http://www.np.edu/VanDavis5K, it said.