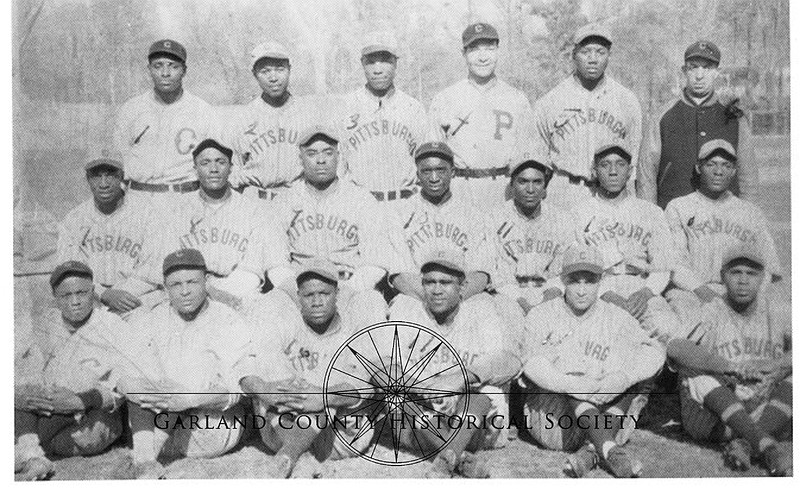 Late in the 19th century, as Jim Crow laws were enacted, Major League teams began to bar participation by Black players, a sad fact that would not change until Jackie Robinson joined the Brooklyn Dodgers in 1947. As a result, Black baseball leagues developed on their own terms.

The history of the leagues in Hot Springs goes back over 120 years to when local hotels sponsored teams consisting of their Black employees. The first recorded mention of this comes from the March 12, 1891, New York Age: “The Eastman Base Ball Club crossed bats with the Park nine, resulting in a score of 3 to 2, in favor of the latter.” The Hot Springs Arlingtons competed regionally, going up against numerous Texas teams. Rube Foster, now enshrined at the Hall of Fame in Cooperstown, pitched for Waco and Fort Worth. Of a 1901 series here, the Fort Worth Morning Register reported: “Foster was more than invincible. He allowed only one hit in the first game, and none in the third.”

An oft-told story from the same decade concerns Charlie Grant, slick-fielding second baseman for several Black teams. In the spring of 1901, he was a bellhop at the Eastman, where future New York Giants manager John McGraw took notice. “Muggsy” tried signing him for his Baltimore Orioles. He introduced the light-skinned Grant as “Chief Tokahoma” (Native Americans were allowed in “organized ball”), but the ploy failed.

By 1904, the Hot Springs Blues played games as far away as St. Louis. In 1910, the Chicago Giants scheduled a jaunt to the Spa City. In 1911, the Kloethe Reds, a local team, hosted opponents like the Brooklyn Royal Giants and Kansas City Giants. In 1915, the Vapor City Tigers came into existence, formed by Hot Springs native Junie Cobb, a soon-to-be-famous jazz musician.

By the 1920s, the Chicago American Giants, Memphis Red Sox, and Kansas City Monarchs were traveling to the Spa for games and/or spring training. Players and coaches stayed at Black-owned hotels on Malvern Avenue, the Pythian and the Woodmen of Union. By the 1930s, the Homestead Grays and Pittsburgh Crawfords entered the local diamond scene. These five teams included Hall of Famers Cristobal Torriente, Bullet Rogan, Smoky Joe Williams, Oscar Charleston, Cumberland Posey, Judy Johnson, Cool Papa Bell, Josh Gibson, Jud Wilson, and Satchel Paige. Coming here alone in 1935, another Cooperstown honoree, Biz Mackey, attended to “a round of training chores” (probably including thermal baths, as many players did). Two more Hall of Fame performers, Mule Suttles and Bill Foster, steamed off excess weight here in the Depression era.

The Negro Leagues would fade as the majors made room for its members, but their legendary players added immeasurably to a rich baseball legacy in Hot Springs.