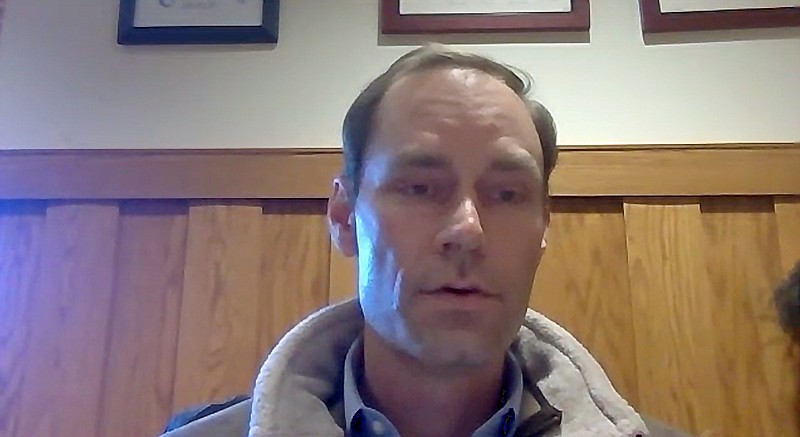 Oncologist Fred Divers explains his concerns over how cancer services have been affected by the COVID-19 pandemic. - Photo by Tyler Wann of The Sentinel-Record

Some local residents considered at high risk for COVID-19 recently expressed concern to The Sentinel-Record that other people who are not following safety measures recommended by the Centers for Disease Control and Prevention are putting them at even higher risk of contracting the virus.

The Sentinel-Record posted links to an online survey on social media last month looking for high-risk respondents to share their experiences. Of the six respondents, all of whom identified themselves as high-risk, three thought the community was doing a good job of following safety measures to keep others safe, while the other three said they were not.

Two people in the latter group responded to and agreed to requests for interviews about their experiences living as a high-risk individual during the pandemic.

Owens, 78, said she has heart issues and is a cancer survivor, now living cancer-free. She said her husband and her brother, who lives next door, have heart issues, as well.

She said she's started taking new medication for her anxiety, which has increased due to people not taking proper safety measures in public.

She's asking people to wear a mask and social distance.

"Be respectful of other people. You know, I don't feel like we need to fear this pandemic, but we need to respect it, because it is a killer. I mean there's no doubt about it," she said.

"But, I wear a mask to keep me from giving it to somebody else and I expect them to do the same courtesy to me."

Owens thinks the pandemic has gone on for so long that people aren't paying attention anymore, something she noticed getting worse since the summer.

"People are not being thoughtful. It's like they don't care anymore," she said. "It's not at the top of their priorities anymore."

According to the CDC, older adults are at increased risk of severe illness, as well as people with medical conditions including heart conditions, Type 2 diabetes, and cancer, among others.

Hot Springs resident Teressa Hopper, 31, said she's at risk because she has bowel issues and is prediabetic, among other things. She said she lives with her father, who is also at-risk.

Hopper said she's also noticing people aren't taking proper safety measures, including not wearing their mask properly if they do wear one.

She said she thinks people don't take it seriously since they think they'll recover, and sees people referring to the virus as "the flu" or "fluvid."

Johns Hopkins University lists the U.S. Case-Fatality rate of 1.7%, with 446,744 deaths at the time of writing.

"Those are somebody's family, you know?" she said. "What if it was yours? How would you feel, especially thinking that maybe you were the one that gave it to them. Personally, I would be devastated."

Owens said she's concerned people still aren't social distancing in doctor's offices, and both she and Hopper said they have delayed several doctor's appointments since the pandemic began for fear of catching COVID-19 while at an office.

Oncologist Fred Divers with Genesis Cancer Center said this is a trend they see in their cancer patients as well, and it's something that's making them concerned.

"No one wanted to go anywhere, to a hospital, to a doctor's office, or anything, right?" he said. "And so, what happened, and this was our fear and concern, was patients were going to put off appropriate screening tests."

He said he is concerned that lack of health care is going to affect cancer patients later on.

Divers referenced a study titled "Impact of COVID-19 on Cancer Care: How the Pandemic Is Delaying Cancer Diagnosis and Treatment for American Seniors" that analyzes data of the Medicare fee for service population. According to the study, COVID-19 pandemic has resulted in decreases and delays in identifying cancer as well as cancer treatment.

"In March-July 2020, in comparison with the baseline period of March-July 2019, there is a substantial decrease in cancer screenings, visits, therapy, and surgeries, with variation by cancer type and site of service. At the peak of the pandemic in April, screenings for breast, colon, prostate, and lung cancers were lower by 85%, 75%, 74%, and 56%, respectively," states a section from the study's abstract.

On top of hesitancy on the part of patients, the study also identified factors such as stay-at-home orders and difficulty on the part of providers to adapt to new guidelines as reasons cancer services were disrupted.

Divers said the unintended consequence of trying to stay home to protect yourself from COVID-19 could be putting yourself at advanced risk of a malignancy later on.

"We really wanted to get the word out, not only about the death rates of COVID-19, we hear death rates related to COVID-19 and those are certainly shocking. I don't mean to take anything away from that at all. But in the absence of some change in behavior, we're going to see a significant change in the survival curves for, you know, cancer-related illness in the coming years," he said.

Divers said that it is safe for cancer patients to get the COVID-19 vaccine. Watch an extended interview with him about what can make someone at risk on the newspaper's website, hotsr.com, or its app.