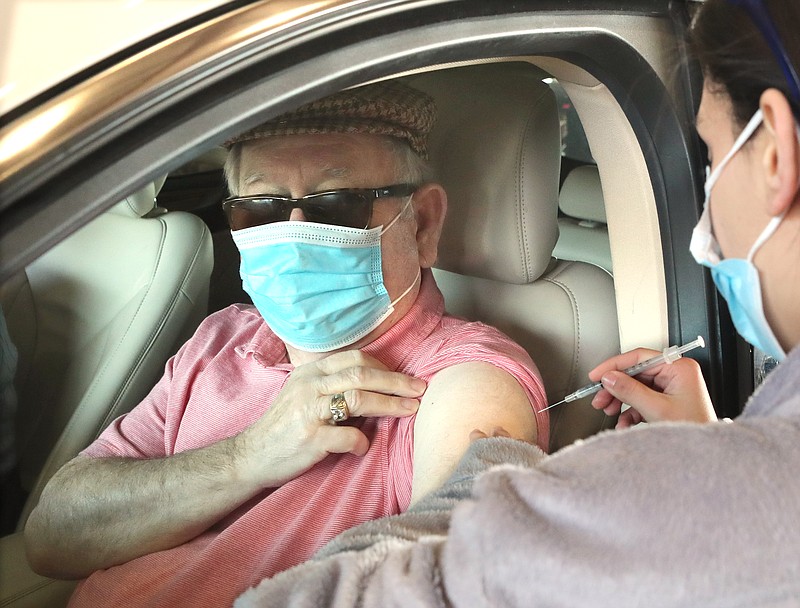 The county continues to see the same pattern of increased COVID-19 cases following three-day weekends, according to the county's health officer.

The decrease in positive COVID-19 cases reported in Garland County since mid-January changed direction the week of Jan. 31 to Feb. 7, with a 64% increase in new cases, and about 13.9% of the county vaccinated, County Health Officer Dr. Gene Shelby said.

Shelby says more increases in positive cases may be in store in the weeks to come.

According to this week's Hot Springs/Garland County COVID-19 Task Force report, there were 4,778 tests recorded in the week of Jan. 31 to Feb. 7, compared to the 2,944 tests recorded the previous week. Despite the increased number of positive tests, the county saw active cases decrease by 10 during the same week.

"I can't really say for sure, but I mean, that's been the pattern really, since Memorial Day of last year. There was a lot of encouragement for not having big Super Bowl parties, so I hope that people took that to heart, but I'm also concerned that we will see somewhat of an uptick with that," Shelby said.

"And then," he said, "even though it's not considered really kind of a major holiday, the Presidents Day weekend coming up this week -- it's a three-day (weekend) and when people have that extra day, they tend to do things socially, and so I would not be terribly surprised that we at least see a small uptick after that."

He noted the 13.9% currently recorded as having been vaccinated in the county is likely inaccurate, and there are likely more that have actually been vaccinated because some Garland County residents who work out of neighboring counties may be getting vaccinated there.

The number of recorded vaccinations in the county will also increase as vaccine supply increases -- which it is, Shelby said.

"It's kind of gradually picking up speed, but it's going to have to pick up a lot more for us to see a real major change by June, but I think it's possible though," Shelby said in regard to events planned for summer.

Arkansas Department of Health Public Information Officer Danyelle McNeill confirmed there has been an increase in vaccine supply, and the department is hopeful it persists.

"We've had some pretty big clinics, especially out in Hot Springs Village, and we had one at the fairgrounds last week, and then there's some smaller clinics that the hospitals are doing, and then then the long term care facilities are doing a really good job," Shelby said.

"One of the positive things of our ... call on Monday is that we had two representatives from two different nursing homes, and one had 100% of their employees that had taken the vaccine and the other one was 97%. So those are kind of encouraging things as we go forward with the vaccination program," he said.

"And also, we got reports on Monday that more of ... the police department and LifeNet and fire department were coming forward to get the vaccination. They were hesitant at first, but they've seen enough people that have gotten the vaccination without any issues."

Currently eligible for the vaccine are people in the Arkansas Department of Health's Phase 1-A, and part of 1-B.

While Phase 1-B currently only allows people 70 and older and educators to be vaccinated, in its entirety it will make eligible food/agriculture workers; firefighters and police not in 1-A; manufacturing workers; grocery store workers; public transit workers; U.S. Postal Service workers; and essential government workers. It is currently unknown when 1-B will progress to include these other groups.

Phase 1-C, which is currently estimated to begin in April, will be for people 65 and older; people 16-64 years old with high-risk medical conditions; and workers in transportation and logistics; water and wastewater; food service; shelter and housing; finance; IT and communications; energy; media; public safety and public health workers.

McNeill said the estimation date for starting Phase 1-C may change based on the vaccine supply.