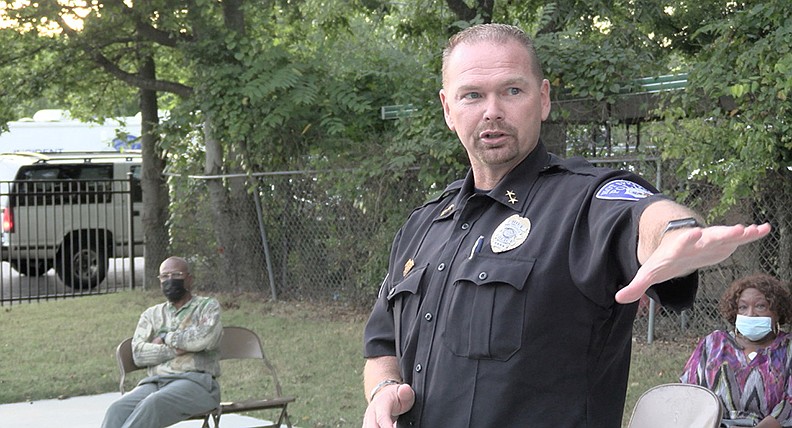 Hot Springs Police Chief Chris Chapmond speaks at a town hall-style meeting in District 2 earlier this year. Chapmond spoke recently with the newspaper about a new crime reduction strategy being implemented over the next few months. - Photo by Tyler Wann of The Sentinel-Record

A violent crime initiative the Hot Springs Police Department launched with local, state and federal partners over a year ago has resulted in 43 arrests, numerous convictions and the seizure of 55 firearms, police said Friday in a news release.

"It has been part of an ongoing operation to unite resources for investigations, patrol efforts, and community safety strategies," the release said.

The arrests also resulted in the seizure of 55 firearms and a large number of illegal narcotics including marijuana, meth, cocaine, ecstasy, and prescription opioids.

In the police department's Strategic Plan and Violent Crime Reduction Strategy, a reduction in violent crime and gun-related violence were identified as areas of concern with an emphasis placed on addressing such incidents.

"The strategies to address these issues included a federal/state prosecution agreement that includes a dedicated state attorney, stationed in Hot Springs, to work in cooperation with the U.S. Attorney of the Western District. To date, the Garland County Prosecuting Attorney's Office is the only prosecutor's office in the Western District to create this arrangement," the release said.

The strategy also spawned the creation of a Violent Crime Task Force including a partnership between local, state, and federal agencies to address violent crime in the Hot Springs area. The task force continues to collaborate on ways to reduce the overall violent crime trends of the community and places a priority on the safety of the citizens and visitors of the community.

"Prosecuting violent criminal cases is one of the most important duties" for the U.S. attorney's office, U.S. Attorney David Clay Fowlkes said in the release.

"We are proud to join with our partners in this endeavor to address violent crime and improve the safety of our communities. We look forward to leveraging our federal resources to prosecute armed, violent criminals and to seek the kinds of lengthy prison sentences that will send a message to others that this kind of criminal conduct will not be tolerated in the Western District of Arkansas," Fowlkes said.