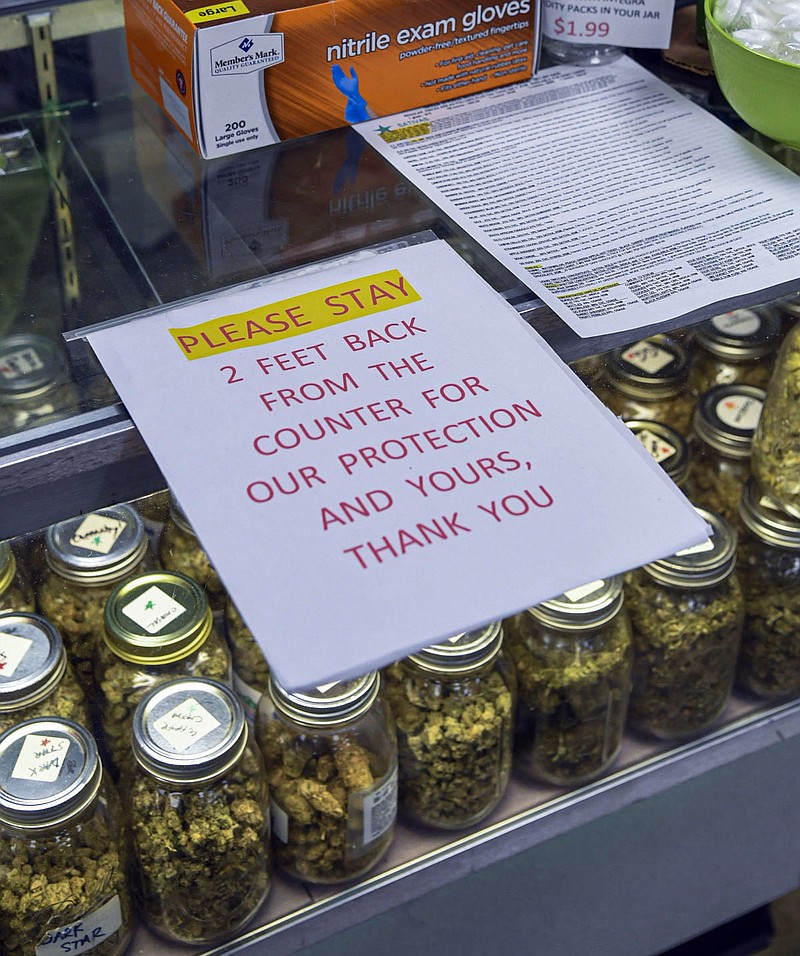 A sign at Green Springs Medical Marijuana Dispensary, 309 Seneca St., asks customers to keep a safe distance from the counter in March. -Photo by Grace Brown of The Sentinel-Record

The ReLeaf Center in Bentonville has led seven of the last eight reports, including the 36-day reporting period that ended Tuesday. It reported 379.35 pounds in sales, raising its total sales close to 4,000 pounds and displacing Green Springs Medical in Hot Springs as the top seller.

The ReLeaf Center opened three months after Green Springs but began making inroads on the latter's sales lead last year. The 132.03 pounds in sales Green Springs reported for the period that ended Tuesday ranked 11th out of the 32 dispensaries in operation. It finished 12th during the four previous reporting periods.

The defendants, which include the Medical Marijuana Commission, Alcoholic Beverage Control and state revenue agency, have yet to file a response. Division 3 Circuit Judge Lynn Williams granted the state defendants an extension earlier this month, giving them until March 26 to respond.

The Tax Procedure Act prohibits the state from releasing revenue figures for individual dispensaries. In aggregate, they have reported more than $242 million in sales on more than 36,000 pounds sold since the first legal sale of the drug in Arkansas in May 2019.

The Department of Finance and Administration said six more license holders are in the process of opening. The Medical Marijuana Commission has awarded 38 of the 40 licenses permitted by the state constitutional amendment voters approved in 2016.