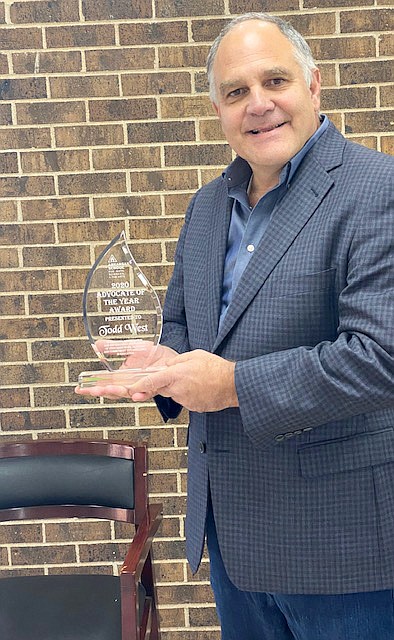 Todd West, the vice chair of the Arkansas School for Mathematics, Sciences, and the Arts Board of Visitors, has been named Advocate of the Year by the school and the ASMSA Foundation. - Submitted photo

Todd West, the vice chair of the Arkansas School for Mathematics, Sciences, and the Arts Board of Visitors, has been named Advocate of the Year by the school and the ASMSA Foundation.

"It's a great honor to be named advocate of the year for the school," West said. "It's impressive to get to work with the visitors board that cares a lot about the community, the students, the faculty, the administration, and other state leadership that support the school."

West said he feels he was selected because the school administration, faculty, and other board members are intentional about recognizing the people that are supporting the school.

"I think that maybe the driver on this one was really just looking at COVID," West said.

When the committee learned schools across Arkansas were closing, West reached out to Corey Alderdice, director of ASMSA, to see if there was any help needed.

"We learned about a gap in rural broadband; that's an area that we focus on," West said.

"When we learned that there were a number of students that were going to have to go home for virtual learning, but did not have the tools to get that done; it was an opportunity for us to take some action to help out those students," he said.

"Outstanding board members always start by asking, 'How can I help the school?' At the outset of the pandemic, Todd was the first member of the board of visitors to ask how he could lend his assistance to support students in need during the uncertainty of the transition to remote learning," Alderdice said in a news release.

"Through his generosity, more than a dozen students were able to receive mobile data access that allowed them to remain fully engaged in their courses," he said.

West got involved with ASMSA in 2017 when he received a call from the governor's office that they were looking for a board member replacement to represent northwest Arkansas. When West did his research on the school, he felt it was the right decision to join the board.

"It was impressive to me that we have a school in Arkansas that's one of the top recognized institutions of its type in the (United States)," West said. "Where 230 students get to enjoy a higher standard of learning to give them opportunities to go out to the workforce and compete or to get degrees."

"It was really enlightening for me to learn about the history of the school and the areas that we're serving throughout the state," West said.

He said the board of visitors serves as an advocate for ASMSA across the state, a resource for parents or individuals in regions of the state to get information, and to provide support for the faculty, administration, students, and the University of Arkansas System board.