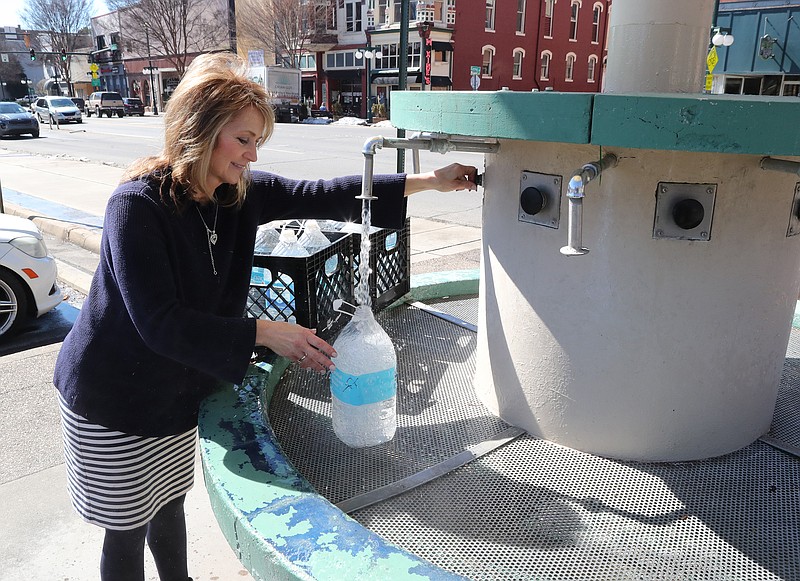 Robin Moore fills jugs at the thermal water fountain in Hill Wheatley Plaza on Monday. The city over the weekend suggested residents use the fountains to help conserve municipal water. The fountain dispenses spring water from Hot Springs National Park. - Photo by Richard Rasmussen of The Sentinel-Record

The city's two treatment plants increased water in the distribution system by 60% over the weekend, but customers still need to use water sparingly.

"We're not anywhere out of the woods," Hot Springs Utilities Director Monty Ledbetter said Monday. "We still need to be in conservation mode."

"We had to take (the tanks) offline and pump directly to customers," Ledbetter said. "We were able to pump directly to the customers and stay off a boil order. There were a few customers on the high spots who lost water temporarily. They've kind of been off and on because of the elevation at their houses. Those high areas of town may lose water for a little while, but it will come back on."

Water started flowing to the Twins tank north of the Albert Pike and Airport roads intersection Sunday night. Ledbetter said by Monday the 6 million-gallon tank held 1.5 million gallons, up from Friday's 825,000 gallons. It feeds the downtown area and the elevated tank on Hollywood Avenue.

"After midnight, we're going to crack the valve and start trying to fill Cornerstone."

The 3 million-gallon Music Mountain tank that receives water from the Ouachita Plant on upper Lake Hamilton held 1.3 million gallons Monday. Water from Music Mountain gets pumped uphill to the Twins tanks. The former's low water level put air into the 20-inch main that leads from the tank, knocking its pump offline Saturday night.

"When we get that low our pump starts cavitating," Ledbetter said. "You could have a problem with the pump if you don't shut if off. We had to shut the Music Mountain pump station down. We had to get the air out of the line, because it was air locked, to get the pump running again. That set us a little behind Saturday night."

Progress was also made on the demand side, as utility crews, including those on the wastewater side, and firefighters have been working around the clock to shut off meters with high-usage rates. Ledbetter said they were working from a list Monday of more than 350 accounts with average usage exceeding 50 gallons per hour, usage rates indicating significant leaks on the customer side of the meter.

"We probably have 4,000 accounts with leaks," Ledbetter said. "We started running crews at night because we started getting so many calls about shutting water off. There's a four-man crew shutting water off every night. They're working as many hours as we can get out of them. We're working them up to about 16 hours, then I make them take breaks.

"The Fire Department has been a big help. They've shut off a lot of water the last few days. (Utility Billing Services) has helped us out, and the ladies in the office have been making calls. They call customers and let them know they have a leak. When you have an emergency like this, it's all hands on deck."

"I think they just took it upon themselves when they read our conservation request," he said. "They're trying to do their part and help. We really appreciate that. That's one of the reasons why we gained about 3 million gallons in our system the last three days."

A news release the city issued Monday said some customers may experience discolored water from mineral deposits in mains. The discoloration doesn't affect water quality, the release said. Ledbetter said mineral deposits may have been dislodged by the manipulation of pumps and valves to maintain adequate pressure.

"When you fluctuate pressure like that, you may get some discolored water," he said. "Certain areas may experience some of that. Our system is pretty clean. The fire department flushes it every year, and we clean our tanks every year."