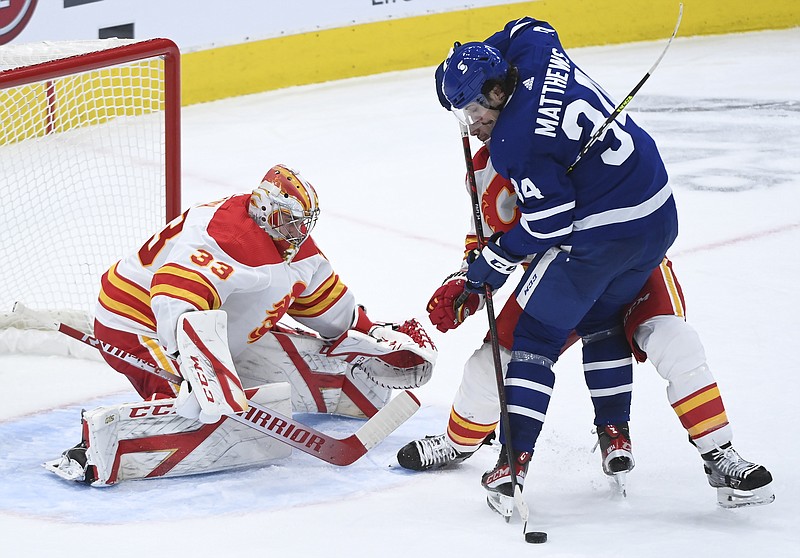 TORONTO -- David Rittich made 34 saves for his first shutout of the season and fourth of his career as the Calgary Flames beat NHL-leading Toronto 3-0 on Monday night.

Matthew Tkachuk and Sean Monahan each had a goal and an assist, and Sam Bennett added a goal for Calgary.

Rasmus Andersson added two assists for the Flames, who had lost four of five in regulation and had been outscored 14-3 in three straight losses, including a 7-1 decision to Edmonton on Saturday.

Michael Hutchinson stopped 30 shots in a surprise start for Toronto (14-4-2).

Both teams were without their No. 1 goalies. Frederik Andersen sat out for the Leafs with a lower-body injury. Jacob Markstrom, who was pulled in his last two starts, didn't dress for the Flames because of an upper-body ailment.

It was the second shutout this season for the 35-year-old Quick, who helped the Kings win two Stanley Cup championships in his career.

Gabriel Vilardi added a goal for the Kings, who scored in each period and extended their winning streak to five games. Brown closed out the scoring with an empty-net goal at 18:57 of the third.

The Islanders beat the Sabres for the third straight time this season after two victories in Buffalo last week. The Islanders also moved to 5-0-1 at Nassau Coliseum.

Blake Comeau scored for Dallas, and Anton Khudobin stopped 49 of 51 shots. The Stars lost their sixth in a row and eighth of nine overall while playing their first game since Feb. 13 due to the weather conditions in Dallas.

Palat, Steven Stamkos and Victor Hedman each had a goal and an assist for the Lightning, who were shut out in each of their first two matchups with the Hurricanes this season.

Jesper Fast scored his first two goals for Carolina. James Reimer made 28 saves, including 11 in the first period. The Hurricanes had won two straight and five of six.

Fleury earned his 64th career shutout in the finale of the four-game series, with the Knights and Avs each recording two wins. Jonathan Marchessault also scored for Vegas in the pivotal middle period.

Philipp Grubauer made 25 saves for Colorado.

The Ducks, the NHL's lowest-scoring team, scored twice in the opening period and had a 3-0 lead early in the second.

Arizona stormed back to tie it in the second period with three goals in less than four minutes and went ahead in the third on Dvorak's second goal.

Jakob Chychrun had a goal and an assist for Arizona. Derick Brassard also scored and Darcy Kuemper stopped 24 shots.

It was the highest scoring game of the season for Minnesota.

Victor Rask had a goal and two assists for the Wild, who improved to 3-1 on their five-game road trip. Kirill Kaprizov, Marcus Foligno, Ian Cole and Jonas Brodin also scored, and Kaapo Kahkonen made 31 saves.

Brent Burns and Logan Couture scored for San Jose. Martin Jones made 16 saves on 20 shots before he was replaced by Devan Dubnyk.