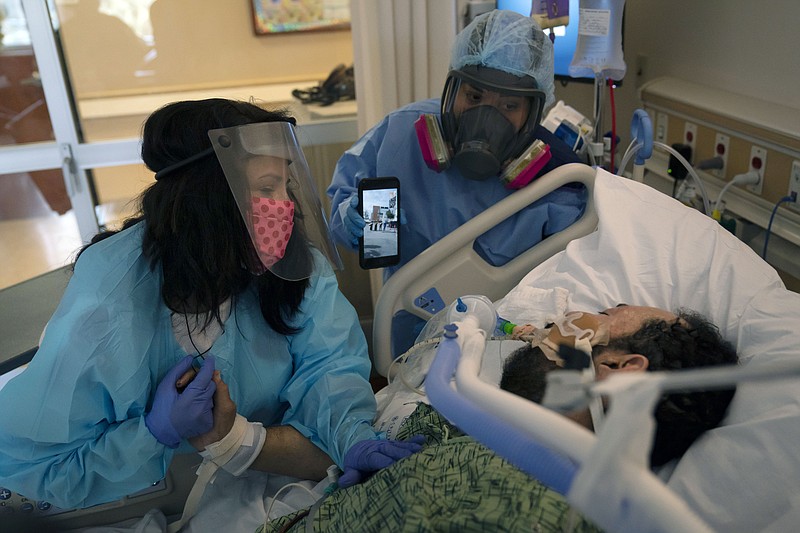 The Associated Press In this Feb. 15 file photo, Patty Trejo, 54, left, looks at her intubated husband, Joseph, in a COVID-19 unit as registered nurse Celina Mande holds a smartphone showing a mariachi band performing for the patient at St. Jude Medical Center, in Fullerton, Calif. Trejo visited her husband for the first time since he was hospitalized more than a month ago. A survivor of COVID-19 herself, she invited a mariachi band to give him courage. Surrounded by hospital staff, family members and friends in the parking lot of the hospital, the band played her husband's favorite song, "La mano de Dios," or "The Hand of God." "He needs to know that I still love him, and he needs to know he's got to fight," said Trejo.

The COVID-19 death toll in the U.S. topped 500,000 Monday, a staggering number that all but matches the number of Americans killed in World War II, Korea and Vietnam combined.

President Joe Biden held a sunset moment of silence and a candle-lighting ceremony at the White House and ordered American flags lowered at federal buildings for the next five days.

"We have to resist becoming numb to the sorrow," Biden said.

"We have to resist viewing each life as a statistic or a blur."

Monday's grim milestone, as recorded by Johns Hopkins University, comes as states redouble efforts to get the coronavirus vaccine into arms after last week's winter weather closed clinics, slowed vaccine deliveries and forced tens of thousands of people to miss their shots.

Despite the rollout of vaccines since mid-December, a closely watched model from the University of Washington projects more than 589,000 dead by June 1.

The U.S. toll is by far the highest reported in the world, accounting for 20 percent of the nearly 2.5 million coronavirus deaths globally, though the true numbers are thought to be significantly greater, in part because many cases were overlooked, especially early in the outbreak.

Average daily deaths and cases have plummeted in the past few weeks. Virus deaths have fallen from more than 4,000 reported on some days in January to an average of fewer than 1,900 per day.

But experts warn that dangerous variants could cause the trend to reverse itself. And some experts say not enough Americans have been inoculated yet for the vaccine to be making much of a difference.

Instead, the drop-off in deaths and cases has been attributed to the passing of the holidays; the cold and bleak days of midwinter, when many people stay home; and better adherence to mask rules and social distancing.

Dr. Ryan Stanton, an emergency room physician in Lexington, Kentucky, who has treated scores of COVID-19 patients, said he never thought the U.S. deaths would be so high.

"I was one of those early ones that thought this may be something that may hit us for a couple months ... I definitely thought we would be done with it before we got into the fall. And I definitely didn't see it heading off into 2021," Stanton said.

Kristy Sourk, an intensive-care nurse at Hutchinson Regional Medical Center in Hutchinson, Kansas, said she is encouraged by the declining caseload and progress in vaccinating people, but "I know we are so far from over."

People "are still dying, and families are still isolated from their loved ones who are unable to be with them so that is still pretty heart-wrenching," she said.

Snow, ice and weather-related power outages closed some vaccination sites and held up shipments across a large swath of the nation, including in the Deep South.

As a result, the seven-day rolling average of adminstered first doses fell by 20 percent between Feb. 14 and Feb. 21, according to data from the Centers for Disease Control and Prevention.

The White House said that about a third of the roughly 6 million vaccine doses delayed by bad weather were delivered over the weekend, with the rest expected to be delivered by mid-week, several days earlier than originally expected. White House coronavirus response coordinator Andy Slavitt on Monday attributed the improved timeline to an "all-out, round-the-clock" effort over the weekend that included employees at one vaccine distributor working night shifts to pack vaccines.

In Louisiana, state health officials said some doses from last week's shipments were delivered over the weekend and were expected to continue arriving through Wednesday. New York City Mayor Bill de Blasio said last week's supply arrived Monday. And in Nashville, Tennessee, health officials were able to vaccinate more than 2,300 senior citizens and teachers over the weekend after days of treacherous weather.

"We'll be asking the vaccine providers to do a lot," said Louisiana's top public health adviser, Dr. Joe Kanter, who expects it to take a week or two to catch up on vaccinations after a storm coated roads with ice and left many areas without running water.

Mary Pettersch, an 80-year-old Overland Park, Kansas, retiree who is spending the winter with her 83-year-old husband in Palmhurst, Texas, anticipated that the second dose they were supposed to get on Tuesday will be delayed because of last week's harsh weather.

She made multiple calls to health officials Monday, but they weren't returned. Still, she wasn't too worried.

"Oh, I would like to get it, but if I can't get it here, I will get it back home," she said, noting that she is returning to Kansas in April. "At 80 you don't get frustrated anymore," she said.

Some hospitals, clinics, community sites and pharmacies that are in Louisiana's vaccination network will get double allocations of doses this week -- just as Gov. John Bel Edwards starts offering shots to teachers, daycare workers, pregnant women and people age 55 to 64 with certain preexisting conditions.

New York City officials expected to catch up on vaccinations after being forced to delay scheduling tens of thousands of appointments last week, the mayor said Monday.

More than 44 million Americans have received at least one dose of either the Pfizer or Moderna vaccine, and about 1.6 million per day received either first or second dose over the past seven days, according to the CDC.

That supply will help government officials reach the goal of having enough injections to vaccinate most adult Americans later this year. On a global scale, the company aims to produce 1 billion doses this year.

J&J disclosed the figures in written testimony ahead of a congressional hearing on Tuesday looking at the country's vaccine supply. White House officials cautioned last week that initial supplies of J&J's vaccine would be limited.

U.S. health regulators are still reviewing the safety and effectiveness of the shot, and a decision to allow its emergency use is expected later this week.

J&J's vaccine would be the first in the U.S. that requires only a single shot. The vaccines from Pfizer and Moderna require two doses spaced several weeks apart. 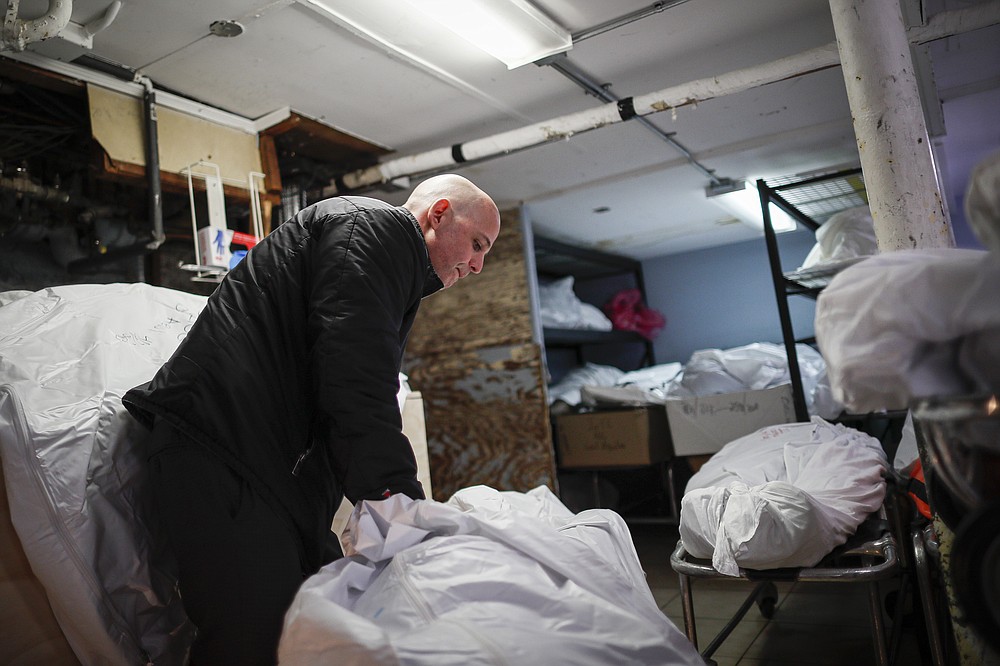 The Associated Press In this April 2, 2020, file photo, Pat Marmo, owner of Daniel J. Schaefer Funeral Home, walks through his body holding facility in the Brooklyn borough of New York. The U.S. death toll from COVID-19 has topped 500,000 — a number so staggering that a top health researchers says it is hard to imagine an American who hasn't lost a relative or doesn't know someone who died.
ADVERTISEMENT