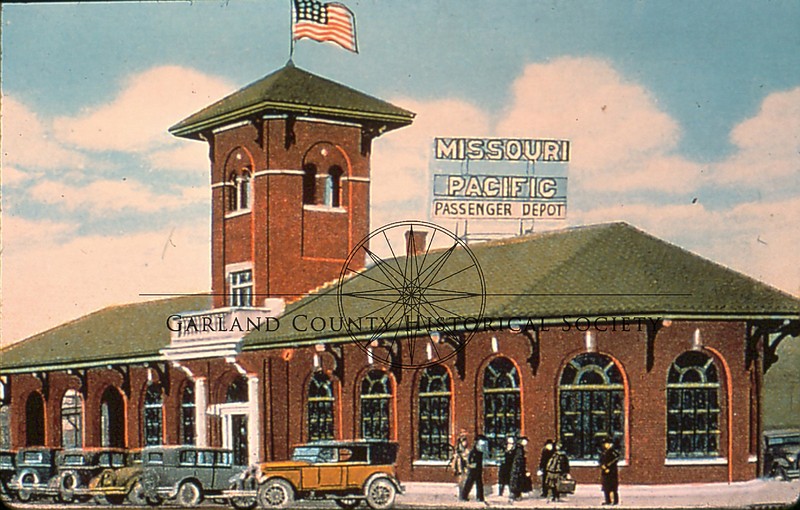 By all rights, you should hear ghostly train whistles at Transportation Depot at Market Street and Broadway Terrace. Locomotives pulled into the Iron Mountain Depot at that site from around 1903 until 1913, when fire destroyed the building. They soon pulled in again, when the Missouri Pacific Railroad (MoPac) in 1917 erected the depot that still stands today. The Missouri Pacific used an Italianate style of architecture for its depots to establish a corporate identity, so the depot has arched windows, a hipped tower, and elaborate, decorative brackets that surround the building, which was added to the National Register of Historic Places in 1992.

Who came here on the Missouri Pacific? Movie stars, politicians, gangsters, athletes, tourists, race fans, invalids seeking the thermal waters, and many more. In the heyday of railroad travel, up to four trains a day rolled into Hot Springs. During the height of the tourist season, some of the trains consisted of a dozen or more coaches and sleeping cars, and a single train would bring several hundred visitors, mostly from the North and the East. But, eventually, the Missouri Pacific was running into Hot Springs at a loss, and the company ended the Hot Springs to Little Rock service.

On Jan. 21, 1964, Train No. 37 was the last MoPac into Hot Springs. Mayor Dan Wolf, over a dozen retired railroad men, and a host of other passengers made a final, sentimental rail journey into Hot Springs on the crowded train. Twenty-two first-graders from Ramble School rode the return train to Little Rock, making their first (and possibly last) train trip in the era of planes and cars and buses. (They, in fact, had to return to Hot Springs by bus.)

But the depot lived on — for a while as a Greyhound Bus Depot. Then, in 1973, Peter Joers turned the structure into the Sawmill Depot restaurant. It quickly became a favorite of locals, especially the city’s legal and business communities. Once a week you could spot Virginia Kelley, President Clinton’s mother, among the diners, and musician Paul Simon had lunch there more than once. Many locals still recall the Sawmill’s French onion soup with longing.

In 1994, Joers sold the building to the city, which assigned the restoration of the depot and the planning of its plaza to Taylor/Kempkes Architects. Their work on the project won an “Outstanding Contemporary Architecture in an Historic Setting” award from the Historic Preservation Alliance of Arkansas. The depot housed the city’s transportation facility and headquarters, and for a while it also housed the Hot Springs Area Metropolitan Planning Organization and a real estate firm.

Today, the depot is occupied by Hot Springs Intracity Transit (IT) and the city’s Stormwater Management Department. Outside the building, you can enjoy Transportation Plaza, which is beautifully landscaped with park benches, historic lighting, and an outdoor sculpture garden. You can follow Transportation Plaza Trail, which leads to the rest of Hot Springs Creek Greenway Trail.

The city has not forgotten the building’s history. From railroad spikes to MoPac brochures, conductors’ hats, train lanterns, even a hand-push luggage cart — the depot lobby is full of fascinating exhibits and the walls are lined with historic photos and posters of passenger railroad days. So visit the depot (when the pandemic is over) — and listen for a ghostly whistle.