Confusion only sure thing at UT 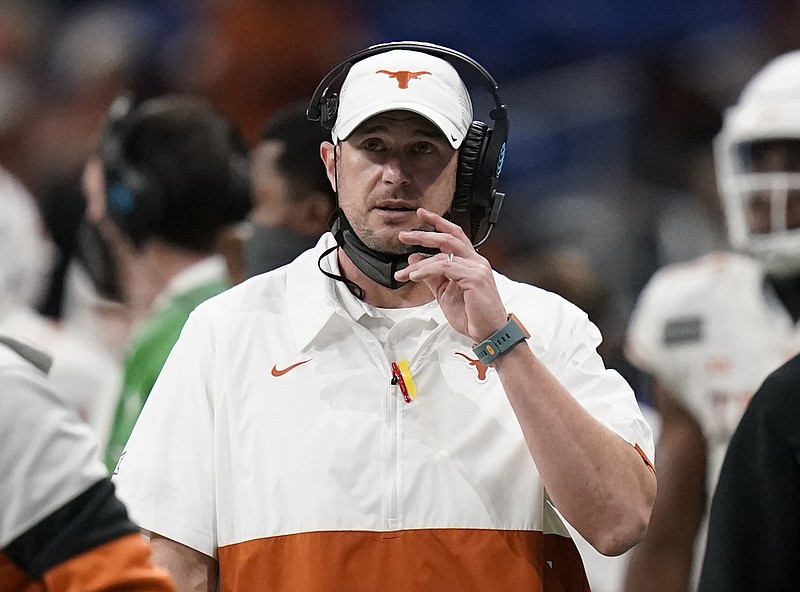 Texas head coach Tom Herman during the second half of the Alamo Bowl Tuesday against Colorado in San Antonio. Texas fired Herman Saturday after four seasons of failing to win a Big 12 championship and making only one appearance in the league title game. - Photo by Eric Gay of The Associated Press

If Shaka Smart didn't know where he stood in the University of Texas athletic hierarchy before Saturday, he should now.

Kansas loses a basketball game by 25 points at Allen Fieldhouse about as often as planes fly non-stop to Neptune. The Texas Longhorns were just entering that planet's air space -- winning 84-59 in Lawrence, Jayhawks coach Bill Self saying afterward it mattered not that one of college basketball's most forbidding arenas was practically empty -- when Gabriel blew his horn about Texas football.

Longhorn Nation didn't wait around to see if Tom Herman, after four years as head coach, had a fifth-year plan. Like a club denied the draft pick it sorely wanted, the Longhorns in effect took the best available selection.

We shall see if Steve Sarkisian, of late the offensive playcaller at Alabama, is another Jimbo Fisher -- a former Nick Saban assistant done well -- or a Jeremy Pruitt.

Texas once looked with interest at Saban, since become football czar for lfe at Alabama. How about Urban Meyer, whose health problems keep interfering with a Hall of Fame coaching career? With Meyer coaching, Texas would have been a trendy pick to join Florida and Ohio State as schools that won national titles under his watch.

That would be true also with Saban, now with five national titles at Alabama on top of one at LSU.

The latest move by Texas speaks of past botched hires by the people who wouldn't let Darrell Royal name his successor and ran off that selection, Fred Akers. Herman came off Meyer's staff at Ohio State, winning the Broyles Award as the nation's top assistant coach, and had his pick of Texas or LSU.

Way back, Will Muschamp was designated as a "head coach in waiting" while Texas waited for Mack Brown to retire. Guessing that Brown might be a latter-day Amos Alonzo Stagg, Muschamp took the head job at Florida. He now finds himself fired from two Southeastern Conference schools (South Carolina being the latest) while Brown is coming off an Orange Bowl trip with North Carolina.

Saban, one hears, came close to taking megabucks from Texas late in the Brown years. Saban was coming off three national titles in four years at Alabama, the first coming in 2009 with a victory over Brown-coached Texas. According to reports, Brown reacted strongly when he got wind that Saban might come to Texas "and take your place and have it be your idea."

With Saban represented by super agent Jimmy Sexton, a Dallas billionaire and former Texas regent acting as middle man heard this from Brown. According to a 2019 online story, "Mack ... turned bright red. Steam started coming out of his ear, and he said, 'That guy is not coming here to win a national championship with my players."'

The plot thickened in 2013, another rough year for Texas and in which Alabama's chances for a third-straight national title ended at Auburn on the "Kick-Six" play. During that time, Saban delayed signing a contract extension. When Saban finally did sign, surprising everyone in the football world with his hire of Lane Kiffin as offensive coordinator, Brown dropped hints that he might stay at Texas. Twenty-four hours later, Brown checked out of "the best coaching job and the premier football program in America."

Arkansas native Charlie Strong lasted three years at Austin before Texas set its sights on Herman. At this rate, David Bazzel may find it hard to give away the Broyles Award next time.

Sarkisian is covered in that respect -- 46-35 in seven seasons -- although he hasn't been a head coach since midseason 2015 when fired at USC because of issues with alcoholism.

One other thing, coach: Win them all every year, the Oklahoma game in particular.

Except it isn't just Oklahoma that's beating Texas lately. Depending on where one ranks TCU, which won this year in Austin, Texas might fall to fourth (behind Oklahoma and Iowa State) in the Big 12 pecking order. Texas A&M belongs now to the Southeastern Conference but, coming off a one-loss season under Fisher, the Aggies can still run it up in recruiting over its ancient rival.

Bohls writes, "The Longhorn fan base also has to trust the decision of an athletic director (Chris Del Conte) who in the last two months has lied or at the very least strongly misled Herman and recruits who signed in mid-December as well as the media that covers this program and depends on him to be truthful."

Something appears wrong with Texas athletics that might stump just another Nick Saban assistant.

What other school fires a head football coach four days after a 55-23 bowl win? And on the same day that the basketball team beats Kansas by 25?