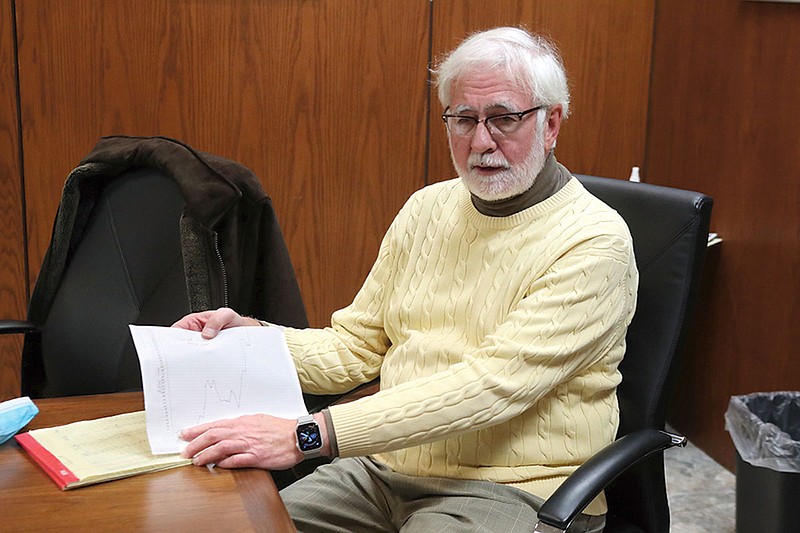 Right before the World Health Organization declared the COVID-19 outbreak a pandemic on March 11, city officials were working on a local response to the approaching threat with the creation of a task force.

Garland County Health Officer Dr. Gene Shelby, speaking to Hot Springs National Park Rotary Club on Wednesday via Zoom, gave an overview of the task force and how it has seen the pandemic progress since March.

"Early -- the first week in March, actually -- (City Manager) Bill Burrough and the County Judge Daryl Mahoney and Fire Chief Ed Davis got together and set up a task force to respond to the pandemic that was approaching Garland County," Shelby said.

"We've got a really wide involvement of people that are in the county and in different functions, and I feel like we've done a good job in really starting out early in addressing the pandemic," Shelby said. "During the month of March we were able to set up the testing site, and we set up our own local call center."

At each Monday meeting, Shelby delivers a report on the virus' effects in the community over the previous week.

"During the months of March, April and mostly in May, we really had the virus very well contained compared to a lot of the areas in Arkansas," he said. "Looking back from now, it's kind of hard to imagine that in the end of May we only had four positive cases per week, and we had like 10 active cases. As everyone knows, a lot's happened in the ensuing months. ... Each of the holidays -- pretty much anytime we've had a three-day weekend -- we've had a spike in our number of cases."

Shelby said the increase in cases began after Memorial Day, with a "significant jump" occurring in June.

Halloween weekend brought yet another surge to the community.

"We saw significant increases in our caseloads, getting up in the range of 200 new positive cases per week, with our active cases being up around 250," Shelby said. "Subsequent to that, we had Thanksgiving, and we saw it again. Almost a doubling of our new cases and our active cases during the months of December."

"And unfortunately, with the Christmas holiday, and kind of back to back with New Years, we continue to see increasing new cases and active cases. At my report this Monday, during the previous week, we had 554 new cases, which works out to 79 new cases per day."

With the increases brought on by the holidays, Shelby said he foresees a doubling in cases over the next two months.

"I can see us easily having over 1,000 active cases in the county within the month of January," he said.

One of the "good things" the task force is focusing on is the vaccine program, Shelby said.

"There are vaccines being given in Garland County," he said. "Not at great numbers at this point, it's still early in the program. There's still a lot of logistical challenges. Fortunately, we have a lot of good people working on that to try to get to the vaccine, but with the limited number of vaccines coming into the state and into the county, it's going to be several months before we have enough people vaccinated to make a real dent in what's going on."

He said he "really reemphasized" at this week's meeting "that right now it's more dangerous in Garland County than it has been during the whole pandemic. It's really spread throughout the county. We've seen spikes in Hot Springs Village that we hadn't seen before."

As the pandemic drags into its 10th month, Shelby told the Rotary Club it still looks to be a "tough road ahead" and safe practices of masking, hand washing and social distancing are recommended.