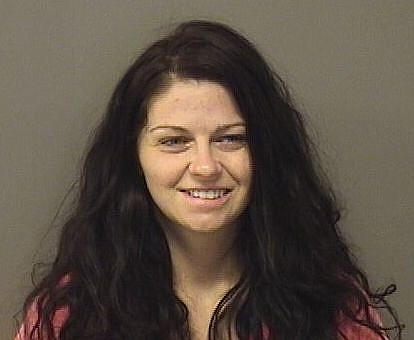 A Mountain Pine woman was arrested on multiple felony drug charges after she was reportedly found passed out in a vehicle in the parking lot of a Hot Springs store Saturday.

Pinkston, who also had a warrant for failure to appear, was being held on a $16,000 bond and was set to appear Monday in Garland County District Court.

According to the probable cause affidavit, shortly after 2:30 p.m., Hot Springs police Officer 1st Class Rod West responded to the store regarding someone passed out in a black Nissan Sentra. He found a woman, later identified as Pinkston, in the car and was able to wake her up by knocking on the window.

When he opened the driver's door, he immediately smelled a strong odor of marijuana. When he asked Pinkston when was the last time she smoked marijuana, she said, "About three hours ago." After discovering the warrant, he took Pinkston into custody and searched the vehicle.

West reportedly found a green bag on the front passenger seat that contained a pill bottle with three small baggies of what later tested positive for meth and four Xanax pills. He also found six syringes, glass pipes and a spoon in the green bag and several empty baggies.

Inside a box on the floorboard he found two more baggies of what later tested positive for meth, two digital scales and two more glass pipes. The total amount of meth found in the vehicle was reportedly 9.6 grams.