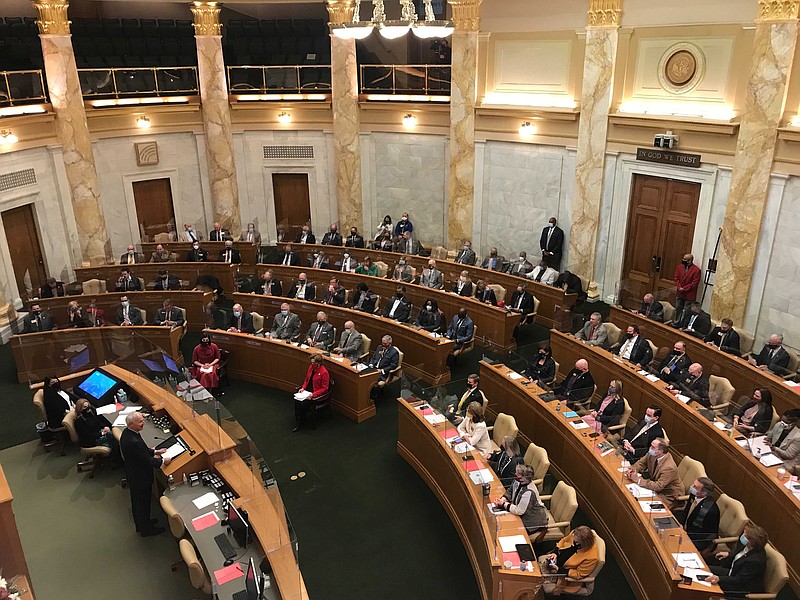 Gov. Asa Hutchinson delivers his State of the State address to lawmakers in the House chamber of the state Capitol in Little Rock on Tuesday. Hutchinson urged lawmakers to support the emergency he's declared in response to the coronavirus pandemic and to enact hate crimes legislation. - AP Photo/Andrew Demillo

LITTLE ROCK -- Arkansas Gov Asa Hutchinson urged lawmakers Tuesday to not "retreat" from the state's coronavirus safety measures and to enact hate crimes legislation as he delivered a State of the State address 11 months into the pandemic.

The Republican governor called on the majority-GOP legislature to support the emergency declaration he's issued in response to the virus. Under the declaration, which is set to expire next month, the state has issued several restrictions such as a mask mandate.

"Now is not the time to withdraw from the battle. We must not be faint of heart," Hutchinson said. "We must keep fighting and not call for retreat as some would advocate."

Hutchinson has faced pushback from some Republicans, including by a group of lawmakers who sued to invalidate the state's virus restrictions. Some lawmakers have proposed scaling back the restrictions or the governor's emergency powers.

Sen. Dan Sullivan, who filed the lawsuit, said he's not arguing there isn't an emergency but believes lawmakers need to have a role in its response.

Hutchinson also urged lawmakers to approve legislation imposing additional penalties for targeting someone because of several factors, including their race, religion or sexual identity. Arkansas is one of three states without a hate crimes law, and the legislation appeared in jeopardy even before lawmakers convened this year's session.

Hutchinson, who has been advocating for the law since 2019, read letters he's received in support of the measure including one from a Little Rock rabbi and from IBM.

"Let's not be the last to enact it," Hutchinson said. "Let's lead and do what is important for so many."

The measure has strong support among Democrats. But conservatives in the Legislature have maneuvered against it and the Republican leader of the Senate has said he doesn't believe it can pass. Hutchinson's remarks appeared to do little to sway stout opponents of the bill within his party.

"If you actually go hang around with a few Republicans you'll actually find it doesn't have strong support," Republican Sen. Bob Ballinger said.

But the lead sponsor of the House version of the hate crimes measure said Hutchinson's support could likely win over crucial votes in his party. Democratic Rep. Fred Love compared it to Hutchinson backing a 2017 bid to end Arkansas' practice of commemorating Confederate Gen. Robert E. Lee on the same day as slain civil rights leader Martin Luther King Jr.

"It underscores the importance on multiple levels. It's important to all people," Love said.

Hutchinson spoke before House members who sat behind plexiglass partitions and nearly all of whom were wearing masks in response to the virus. Arkansas has had one of the biggest known outbreaks of the virus in the country.

Unlike past years, the governor only addressed the House in person with the Senate watching a live feed in its chamber on the opposite end of the Capitol.

Hutchinson detailed other parts of his agenda, including raising teachers' pay by $2,000 over the next two years and tax cut proposals that include a break for new residents.

Hutchinson condemned the violent mob loyal to President Donald Trump that stormed the U.S. Capitol last week, saying they "attacked the foundations of our democracy." The former congressman urged lawmakers to find a way to work together.

"How do we want history to remember this session?" Hutchinson said. "Will it be one that brought people together or did we just add more fuel to the flames of division?"