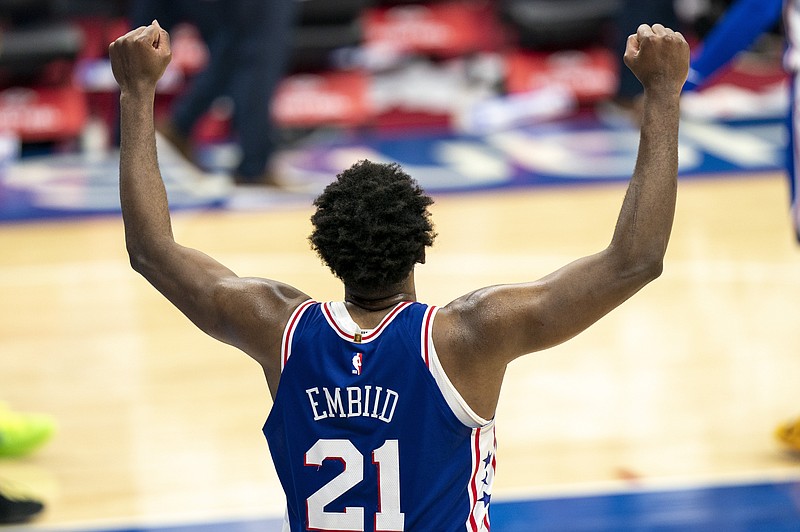 Philadelphia 76ers' Joel Embiid reacts to the 137-134 overtime win in Tuesday's game against the Miami Heat in Philadelphia. - Photo by Chris Szagola of The Associated Press

PHILADELPHIA -- Joel Embiid had 45 points and 16 rebounds, Dakota Mathias' only basket of the game was a go-ahead 3-pointer with 26.1 seconds left and the Philadelphia 76ers hung on to beat the undermanned Miami Heat 137-134 in overtime on Tuesday night.

Embiid had one of the great games of his career and carried the Sixers with a perfect third quarter and clutch buckets in OT to put them on the brink of victory.

Mathias, who went undrafted in 2018 and signed this season with the Sixers as a two-day G League player, got the ball from the top of the arc and buried it for the 134-132 lead.

Tyler Herro helped the Heat overcome Embiid's dominant effort when his 3-pointer tied the game 115-all with 2:25 left. Precious Achiuwa scored two straight baskets -- the first off Philly's shot clock violation, then off a turnover -- for a 119-115 lead.

Embiid buried the pull-up jumper just inside the 3-point arc with 3.3 seconds left that tied it 120-120 and sent the game into overtime.

NEW YORK -- Kevin Durant had 34 points, 13 assists and nine rebounds, Bruce Brown made a huge contribution while starting for the absent Kyrie Irving, and Brooklyn rallied from 18 down to beat Denver.

Brown scored 16 points, including the tying and go-ahead baskets down the stretch. Durant followed with Brooklyn's next six points, including a 3-pointer that essentially put it away at 120-113 with 27 seconds to play.

Nikola Jokic had 23 points, 11 assists and eight rebounds for the Nuggets, who were trying to sweep a three-game road trip.

Anthony Davis added 19 points and 10 rebounds in three quarters to help the Lakers to their second straight blowout over the Rockets after a 120-102 victory Sunday night.

Los Angeles led by 20 or more for most of the game on a night James Harden made just 5 of 16 shots and the Rockets were outrebounded 55-42.

Christian Wood had 18 points and eight rebounds and Harden had 16 points, seven rebounds and six assists in a game where none of Houston's starters played in the fourth quarter.

Keldon Johnson added 18 points for the Spurs, who won their 2,200th game since joining the NBA in 1976. The Spurs committed a season-low four turnovers.

Shai Gilgeous-Alexander led Oklahoma City with 20 points while Hamidou Diallo scored 16. The Thunder are 0-4 this season at Chesapeake Energy Arena but 5-1 on the road. Oklahoma City's next three games are at home.

SAN FRANCISCO -- Myles Turner made a go-ahead 3-pointer with 2:59 to play and scored 22 points as Indiana stymied Golden State.

The Pacers kept Stephen Curry in check by regularly playing him with a tough box-and-1 defense, though the two-time MVP still had 20 points.

Justin Holiday also hit a key 3 late to help Indiana bounce back from a loss at Sacramento a night earlier.

Andrew Wiggins scored 22 points as the Warriors concluded a 4-3 homestand, their longest of the season. Wiggins also blocked a career-best five shots.

Turner had 11 rebounds and four blocks for the Pacers.

The Jazz are headed home with a victory, albeit a little earlier than expected. Utah was scheduled to play Wednesday at Washington, but the NBA postponed the game because the Wizards do not have the minimum eight available players.

Jordan Clarkson had 21 points and eight rebounds off the bench and Bojan Bogdanovic added 20 points for the Jazz, whose largest lead was 114-80 late in the fourth quarter on a 3-pointer by Miye Oni.