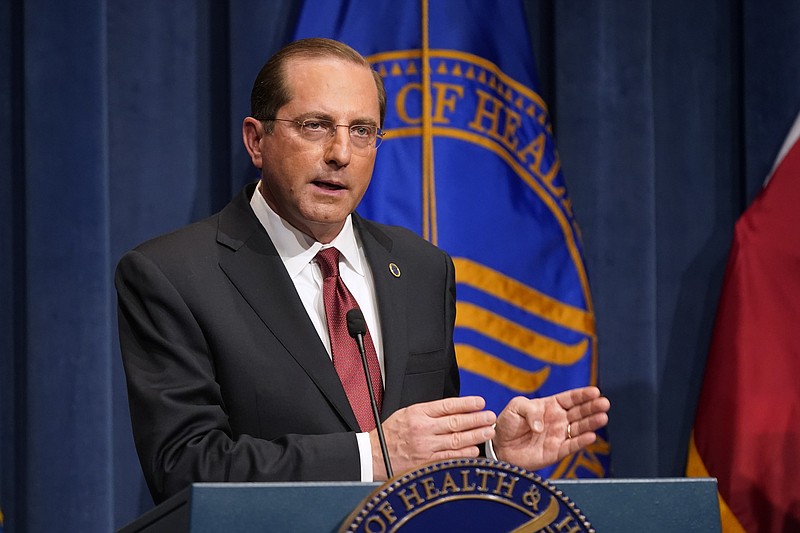 One change will have some teeth to it. Azar said going forward the federal government will base each state's allocation of vaccines partly on how successful states have been in administering those already provided.

"If you are not using vaccines that you have the right to, then we should be rebalancing to states that are using that vaccine," Azar said at news conference.

That won't happen overnight, not until officials try to sort out whether lags in reporting could be the reason for what appears to be subpar performance. Currently, the government allocates vaccines based on state population.

Azar also said the government will stop holding back the required second doses of the Pfizer-BioNTech and Moderna vaccines, practically doubling supply. Both those shots require two doses to achieve optimum protection.

Additionally, Washington is urging states to immediately start vaccinating other groups lower down the priority scale, including people age 65 and older and younger people with certain health problems.

The move to increase the supply of vaccines better aligns the outgoing administration with the new Biden-Harris team. On Friday, President-elect Joe Biden said he will rapidly release most available vaccine doses to protect more people. He said he supported immediately releasing vaccines that health authorities were holding back out of caution, to guarantee they would be available for people needing their second dose.

"This next phase reflects the urgency of the situation," said Azar. "Every vaccine dose sitting in a warehouse rather than going into an arm could mean one more death that could have been avoided."

Initially the government had been holding back second doses as a safety precaution against potential shortfalls in production. Now, officials say they are confident the needed supply will be there. And people needing a second dose will have priority.

"This is not a supply issue at this moment in time," Vice President Mike Pence told governors on a White House call. A recording was provided to The Associated Press.

Azar also gave states the green light to designate more places where people can get shots. Those locations can include tens of thousands of pharmacies, federally supported community health centers that serve low-income communities, and mass vaccination sites already being set up in some states.

The flurry of changes raised questions for some local officials, still trying to get vaccination campaigns into full swing.

As of Monday morning, the government had distributed about 27.7 million doses to states, U.S. territories and major cities. But only about 9.3 million people had received their first shot, according to the Centers for Disease Control and Prevention's online tracker. That means only about 34% of the available vaccines had been administered.

Initially, the shots were going to health care workers and nursing home residents. Those 75 and older were next in line. But problems arose even in vaccinating that limited pool of people. Some hospital and nursing home workers have been hesitant to get the vaccine. Scheduling issues created delays in getting shots to nursing homes.

Some states, including Arizona, have or are planning to open up mass vaccination centers, aiming to inoculate thousands of people a day in a single location. In Florida, Gov. Ron DeSantis opened up vaccinations to people 65 and older. In other states, local health authorities have started asking residents 65 and older to register, in anticipation the vaccination campaign would be expanded.

Although Azar said the shift in strategy was a natural evolution of the Trump administration's efforts, as recently as Friday he had raised questions about whether Biden's call to accelerate supplies was prudent.

On Tuesday, he also sought to deflect blame to the states for the slow uptake of vaccines. Azar said some states are being "overly prescriptive and trying to micromanage every single dose of vaccine," leading to bottlenecks.

Azar also criticized what he called "the hospitalization of vaccine distribution," saying "we have too much vaccine sitting in freezers in hospitals."

State and local officials are sure to point out that it was the federal government that recommended putting health care workers at the front of the vaccination line.

The Trump administration directed a crash effort to develop, manufacture and deliver vaccines, hoping to avoid a repeat of earlier debacles with coronavirus testing. Dubbed "Operation Warp Speed," it has produced two highly effective vaccines, with more on the way.

Each state has its own plan for who should be vaccinated, based on CDC recommendations that gave first priority to health care workers and nursing home residents. Some critics say the administration's planning should have extended into helping states administer the shots after they were delivered. Congress has recently approved more than $8 billion for that.

The slow pace of the vaccine rollout has frustrated many Americans at a time when the coronavirus death toll has continued to rise. More than 376,000 people in the U.S. have died, according to the Johns Hopkins database.

Azar said the pace of vaccinations has picked up, on track to reach 1 million daily within a couple of weeks. But the American Hospital Association estimates 1.8 million vaccinations a day are needed, seven days a week, to achieve widespread immunity by the middle of this year. Biden has set a goal of 100 million shots administered in his first 100 days.

Local public health officials were surprised by Tuesday's announcement and scrambling to figure out how to implement the changes, said Adriane Casalotti of NACCHO, the National Association of County and City Health Officials.

"All levels of the governmental public health system really need to be on the same page. Surprises don't benefit anyone," she said.

Letting more groups in line "all of a sudden makes a lot more people potentially eligible and certainly interested and we need to have the systems in place to get them the vaccine," Casalotti added.

"We think right now getting the vaccine into (more) individuals, now, could really make a huge difference in the hospitalizations that you would see in your jurisdictions say four to six weeks from now," CDC Director Robert Redfield told governors on the call, adding it was his strong recommendation.

Biden, who has been highly critical of the Trump administration's pandemic response, is expected to give a speech Thursday outlining his plans. He's looking for a turnabout in his first 100 days.

Azar said they'll brief the Biden transition team on the changes, but didn't seek their blessing. 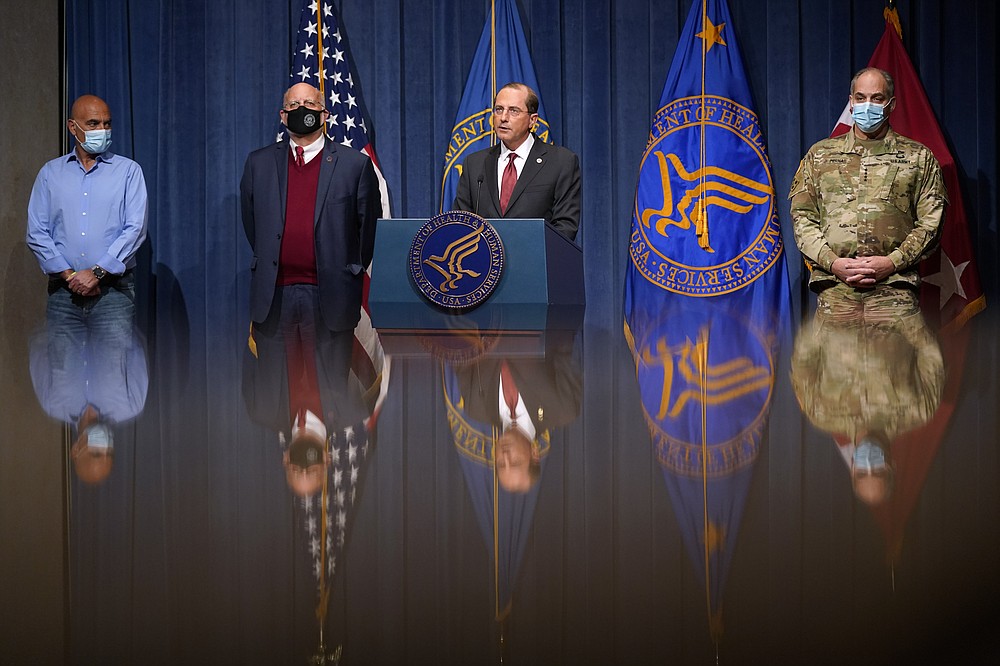