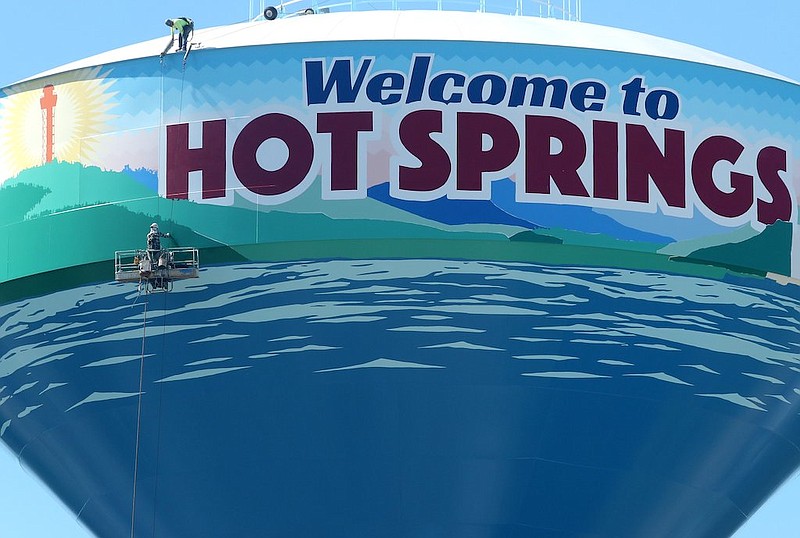 A painting crew works on finishing the artwork on the city's new water tank behind Lowe's on May 18. - Photo by Richard Rasmussen of The Sentinel-Record

Mixing systems the city is activating this week in more than half a dozen ground-level storage tanks may cause brief periods of discolored water, the city said.

"These things sit on the floor of these tanks, and they move quite a bit of water," Hot Springs Utilities Director Monty Ledbetter said Wednesday. "If there's anything on the floor of those tanks, it will get stirred up. There's not a lot, because I had them cleaned last year. The tanks are good and clean to start with, so there shouldn't be a lot."

Ledbetter said the new mixing system inside the 300,000-gallon tank south of Belvedere Golf Resort was activated Wednesday. Other tanks' mixers will be activated later in the week.

"They're mechanical mixers," Ledbetter said. "When we turn them on, they stay on 24/seven. They're designed to turn the tank over every 30 minutes."

"We'll actually crawl up there and get a sample at the top of the tank, on the surface, and then we'll sample the water at the bottom of the tank and make sure the temperature and the chlorine residuals are identical," Ledbetter said. "That's how we know the tank mixer is working correctly.

"These old tanks have the same inlet and outlet. There's no stagnant, older water that sits around for days before it's (drafted)."

The interaction of residual chlorine from the treatment process and organic materials in water yields trihalomethanes. The Environmental Protection Agency has linked prolonged exposure to the disinfectant byproduct to increased risk of liver and kidney cancer.

THM concentrations increase the longer treated water remains in the distribution system, creating higher concentrations on the south and east ends of a sprawling system that serves customers across 145 square miles. Water samples collected quarterly by the Arkansas Department of Health have exceeded the EPA's 80 parts-per-billion limit, but Ledbetter said recent samples taken from the outer edges of the service area have been within EPA limits.

"We haven't failed any of those lately," he said. "Typically in the wintertime, it's always lower. The times we have problems are in the summer months."

The plant will treat up to more than 15 million gallons a day from the city's Lake Ouachita allocation. The two existing plants are closer to their raw water sources: upper Lake Hamilton and the city reservoir at Lake Ricks at the northwest and north ends of the service area.

The recently installed mixing system in the 400,000-gallon, ground-level Crystal Springs tank is powered by solar panels. Ledbetter said it will shut off at night and resume operation in the morning.