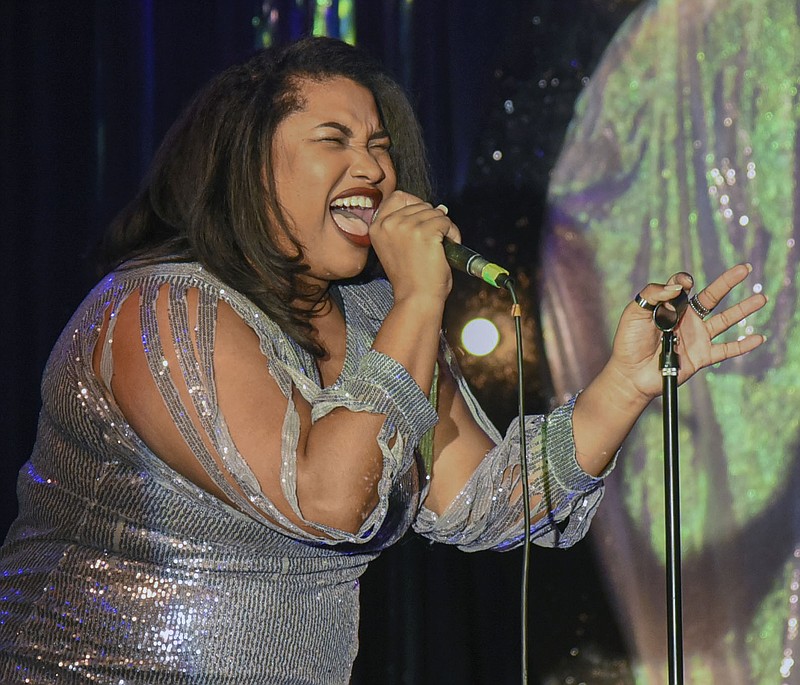 Hot Springs native Ashleigh Wiggins, 29, has been singing her entire life, and even auditioned for "American Idol" and "The Voice," but her music career didn't move forward until last year when she landed a spot on the Netflix series "Sing On."

Her message to others? Encourage the people around you to keep going until they get their time in the spotlight.

"Last year, on Halloween, I had the opportunity to fly all the way to London to film the show that's currently streaming right now, 'Sing On,' on Netflix, and I got to meet some pretty awesome people," Wiggins said. "I got to experience a lot of things that I probably never would have experienced if I had not gotten on the show.

"I'm lost for words because I still can't believe that I did all that; it's like it was a dream. Because I've auditioned for 'The Voice' and 'American Idol' and all of that all my life because I've always wanted to sing, but I felt like that wasn't my path or something, like I wasn't supposed to pursue music because I would always get a 'no,' or they would say 'Oh, well you're not what we're looking for,' or, 'We want someone more talented,' or something like that. It was always a 'no.'"

Wiggins said to an extent she gave up on moving forward in her singing career after so many rejections. It wasn't until years later she found herself auditioning for Arkansas' Karaoke World Championship.

"This is a global organization, and what they do, is you compete in your town for a karaoke. ... Well, I made it to the top three in Arkansas, so I'm one of the top three singers here in the state. I ended up performing in Little Rock for our state competition, so that's where I made top three, and the top six people go all the way to Vegas to compete for Arkansas. ... So when I went to Vegas this opportunity to audition for this TV show came about ... and I just went and auditioned just for fun.

"I didn't even know what show it was; they wouldn't tell me. And then I got a call months later that I was selected and they wanted me to fly to London literally in a week. I was scared to death. I thought, 'Are they serious?' But they were calling me from LA, and places, and telling me that they loved my audition, and that they really wanted to pursue this, and that they think I'd be a great fit for the show.

"They still wouldn't tell me what the name of the show was. I'm thinking, 'This is sex trafficking. I'm getting kidnapped. There's no way someone wants to hear me sing and fly me to London to perform. There's no way.' And you know what, I took my crazy ass on a plane and went to London."

To her fortunate surprise, there was no untoward activity involved.

"They took so much care of me," Wiggins said. "I went and traveled completely alone; it was my first time traveling utterly alone. That long of a flight to go to a country I've never been in. And when I got there, it was just blissful from there. It was the best time of my life.

"I always felt like I wasn't good enough ... but last year, I don't know, something said 'Just go ahead and go sing for the Karaoke World Championship. Go ahead and perform at this venue; go do this.' And I was just having fun for once. Just having a good time with no expectations, and it led me to this audition that really like changed my mindset."

While she had taken a sort of hiatus on her career path with singing, Wiggins was using her time for other things just as important to her. For the past 10 years, she has been a caregiver to her great-grandmother, who she refers to as her mom, after she suffered a severe stroke. Caregiving led her to become a nurse.

"Mind you, I have never wanted to be a nurse a day in my life," she said. "Like I never knew anything about nursing. I mean I had never broken a bone, or didn't know anything about medical stuff at all, but my mom is my heart, my soul. I didn't want to see her go into a nursing home or see her go into a facility at all, so I took on the role of being her caregiver and I have been doing that for 10 years, and she's 88 now.

"This is the first year that I'm kind of getting to start living my life. My sister has come and stayed with my mom now. She's kind of letting me move forward with my life, so that's been a hard transition for me recently, but it's a necessary one because if not, I'd stay up under my mom until I was 50."

Wiggins said she now finds herself to be torn because while she is a great nurse, her heart has always been with music. Simultaneously, as with nursing, she also finds music to provide healing for herself and others.

"Singing, to me, is the most healing thing that I have had in my life, especially when my mom was sick. Even when she came home and was struggling to recover, I think just being able to take time away to sing or to perform for her, because a lot of the time I just, you know would turn a radio on, turn karaoke on and get to singing, and that would bring her immense joy, and that would always make me happy, and I didn't feel like I was so broken anymore.

"And what I want (my singing) to do for my listeners, for whoever listens to me ... whether its 10 people or 100 people, I hope that they smile and they feel a sense of joy when they listen to me, or a piece of comfort, because a lot of the times, especially right now, it's nothing but negative stuff online, it's nothing but drama, it's a lot of hard things to read and watch these days. So I want to give people just a slice of peace."

Regardless of what stage her singing lands her in the future, Wiggins said she has made it this far from encouragement her family has provided her, and said she wants people to be reminded to simply encourage those around them.

"Encourage the people around you -- whether they want to Rollerblade, or they want to be a nurse, or they want to sing the national anthem in the shower," she said. "I just want people to start encouraging their loved ones and their friends to do what their dreams are because I had so many great people encourage me to just go sing. 'Just go sing at that karaoke bar, it's no big deal,' and I did, and it led me to being third best in Arkansas, which led me to going to Vegas, then getting this opportunity of a lifetime.

"These people at Netflix were so kind and treated me so well. I was so emotional after filming the show. I was there for five days (and) after filming I just cried ... and the producer told me, he was like, 'Why are you crying?' and I said 'Because I never knew I was really good enough to do this. Like I never knew that somebody would see something in me and give me this opportunity.' And he was crying ... he said, 'Ashleigh, you are phenomenal. You're a wonderful vocalist, and I'm just grateful that you took the time to come sing; all of you; on our episode.'

"He was just very gracious, and it was just a moment where I had to reflect and think, 'You know, I took an opportunity, I believed in myself, I had great encouragers, I had a great influence in my life, and I'm happy for that.' So I just want people to keep encouraging those that they love to do what they want to do. Because it could happen today or tomorrow, we really don't know. I didn't think this would happen, so I'm just grateful."