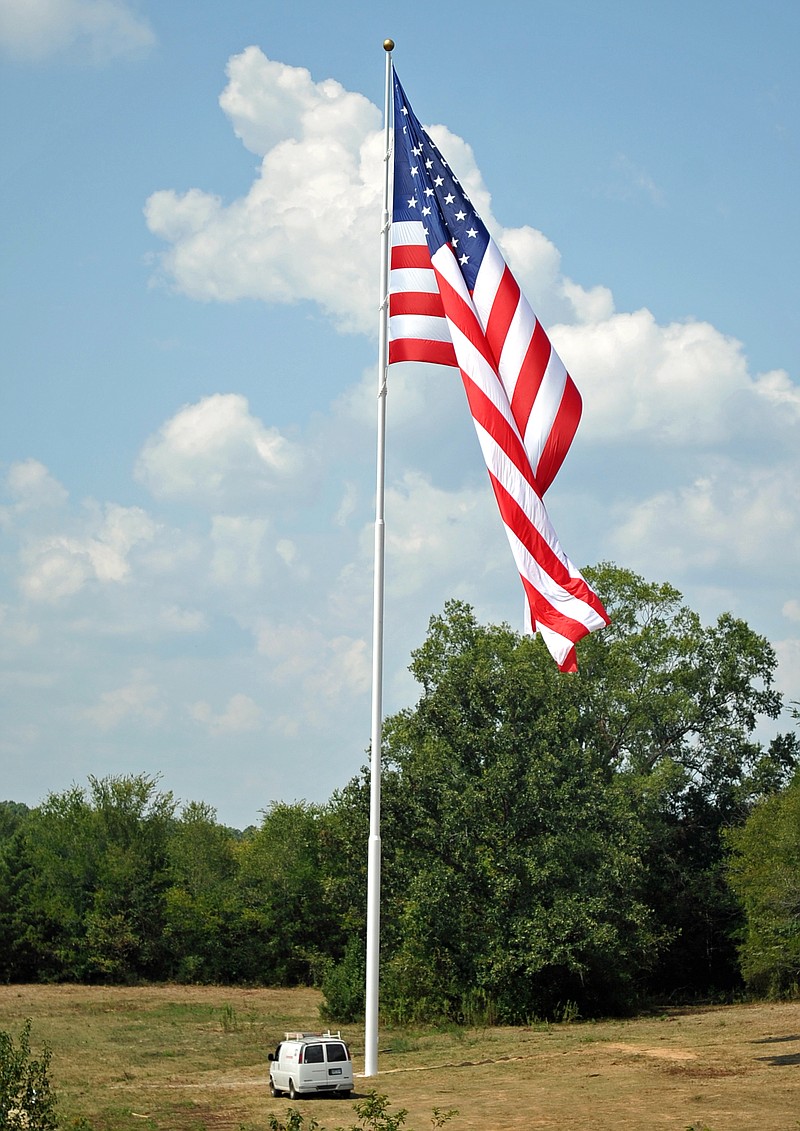 Alliance Rubber Co.’s American flag is shown from the on-ramp from Carpenter Dam Road to the King Expressway in 2015. - File photo by The Sentinel-Record

The "massive" 80-by-40-foot flag, which was first flown on Sept. 4, 2015, and could easily be seen from the expressway, was discovered missing early Thursday morning, Misty Smith, creative director for Alliance, told The Sentinel-Record.

The 130-foot pole and the surrounding area were vandalized as well, she said. Alliance notified Hot Springs police and were initially offering a $1,000 reward for the return of the flag or any information leading to the arrest and prosecution of the offenders who stole it. Smith noted later in the day other businesses "stepped up" and increased it to $2,000.

"From what I understand, the perpetrator gained access by crossing the fence that runs alongside the bypass. They shattered the two large halogen lamps that pointed up toward the flag, then busted the electrical box which controls the line to the flag in order to pull it down," Smith said, noting damages are estimated to be around $5,000.

"As of right now, we don't know why and we certainly don't know who would have done this," she said. "However, I know that this flag was loved dearly by this community as a whole and I feel confident that they will go to great lengths to see it returned."

The idea for the flag started with Alliance Rubber Co. President Bonnie Swayze. The gold ball at the top of the flagpole was signed by all the company employees working at that time. The pole was erected on land Alliance purchased in June 2015. The all-weather flag, made by a Houston, Texas, company, is illuminated at night by two 1,000-watt spotlights.

"It won't be easy to hide, that's for sure," Smith said, "So, hopefully, everyone in the area will check their security cameras once they hear about it and report anything suspicious they find."

Anyone with information about the theft should contact the Hot Springs Police Department at 501-321-6789 or can report tips anonymously at https://www.cityhs.net/FormCenter/Police-Department-12/Crime-Solvers-Tip-Form-80 and complete the crime tip form using the category "Crime against property."