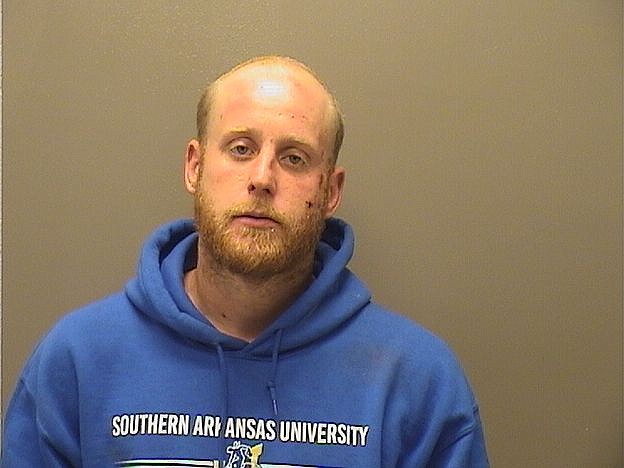 A felon on parole who was allegedly breaking into cars early Thursday and fled from an Arkansas State Police trooper was arrested after a brief manhunt.

Corey Aaron McHenry, 29, who lists a Longpoint Road address, was taken into custody shortly before 5 a.m. and later charged with a felony count of breaking or entering, punishable by up to six years in prison, and misdemeanor counts of resisting arrest and second-degree criminal mischief.

He was held overnight on a zero bond parole hold and was set to appear Friday in Garland County District Court. He was previously convicted on Nov. 5, 2018, in Garland County Circuit Court on felony charges of possession of a firearm by certain persons and theft by receiving over $1,000 and sentenced to five years in prison, but was later paroled.

According to the probable cause affidavit, around 4:15 a.m. Thursday, Garland County sheriff's deputies responded to the area of Ernest Way and Phadral Point after an off-duty deputy saw a man attempting to break into vehicles in that area.

The suspect was described as a male dressed in black with a black backpack. ASP Trooper Justin Parker responded to assist and located a black Cadillac with an open door in the 200-300 block of Phadral Point. He saw a man wearing a black jacket, jeans and a black backpack bent over the driver's seat.

When Parker ordered the man to show his hands, the man fled on foot. Directly across the street, deputies found a gray Honda Accord which was registered to McHenry. All the windows were rolled down and multiple wallets could be seen in the front seat. They found a wallet in the driver's door pocket with McHenry's ID.

McHenry was located a short time later near the intersection of Springwood and Majestic Lodge Road, which is near Phadral Point, and taken into custody. It was noted he was wearing muddy bluejeans and a blue hoodie.

Later that morning, a resident on Paradise Point reported he had discovered his vehicle was broken into and his wallet and a jacket, which he gave descriptions of, were missing. He said it had to have happened between 10 p.m. Wednesday and 6 a.m. Thursday.

A search warrant was executed on McHenry's vehicle and sheriff's investigators reportedly located a wallet and jacket matching the description of the stolen property from Paradise Point.