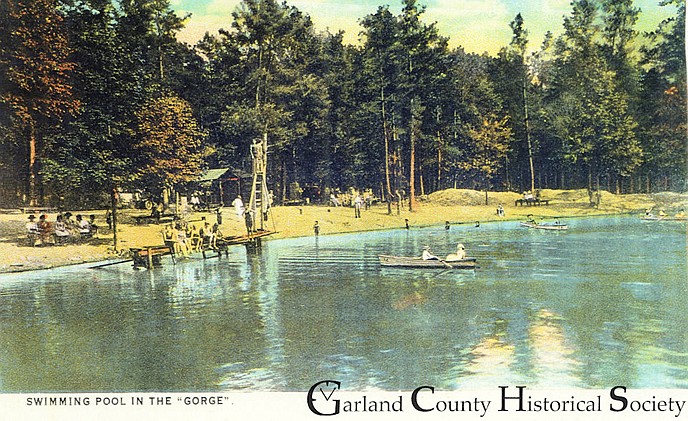 Did you know that for many years a swimming lake was a popular summer attraction in Gulpha Gorge Campground?

In 1924, Colonel John R. Fordyce gave Hot Springs National Park 16 acres of land for an auto camp in Gulpha Gorge. The property included two rustic changing booths beside a swimming lake called “Lake Lillian” in honor of Fordyce’s wife. One color postcard image of the little lake captioned it “Mirror Lake,” but that name was probably invented by a copywriter.

The lake drew visitors (particularly children) like a magnet. Old photos of the original bathing booths show children’s bicycles lying haphazardly on the grass. It’s easy to imagine groups of excited youngsters riding into the campground on a hot day, throwing down their bikes, and running down to the lake for a cool dip in the pool.

The dam was not in the best shape when it became park property, so in January 1925 the park work force repaired it. In June, the workers also deepened the pool, and the following summer they erected a diving structure in the lake. New diving platforms succeeded the old in February 1928 and again in August 1932. Also in 1932, the old changing booths were razed to make room for new ones. Around this time workmen erected a tall platform on shore to be manned by a park service lifeguard.

A Civilian Conservation Corps (CCC) camp came to Hot Springs National Park in May 1938 to work on several projects in the campground. In June, the crew replaced the diving platform for the last time, using a more complex multi-level design. In September, the crew removed silt from the lake bottom and excavated to deepen the pool.

Public Works Administration funds were appropriated in December for construction of a sewage disposal system at the campground. Flaws in the system’s design may have polluted the lake, which subsequently began to fail water quality tests. The park was unable to fix the problem. By 1941, the lake had become a public health hazard, prompting the U S. Public Health Department to recommend that it be drained and permanently abandoned.

Park managers were resigned to the necessity of closing the lake, but visitors were not.

Even after the lake was drained, people continued to swim whenever rainfall accumulated in the pool. The park superintendent put up a sign in July 1943 informing the public that the water was unsafe for drinking or swimming. The problem was not resolved until September of 1946, when the park work force blew a hole in the dam to allow better drainage. The remainder of the dam was demolished in May of 1947.

Today, you can still walk on the footbridge crossing the remnants of the dam, next to the amphitheater. If you stand in the center of the path and look back at the highway bridge, you can almost see the former lake glimmering in the sunlight and hear the fading shouts and laughter of long-gone swimmers.