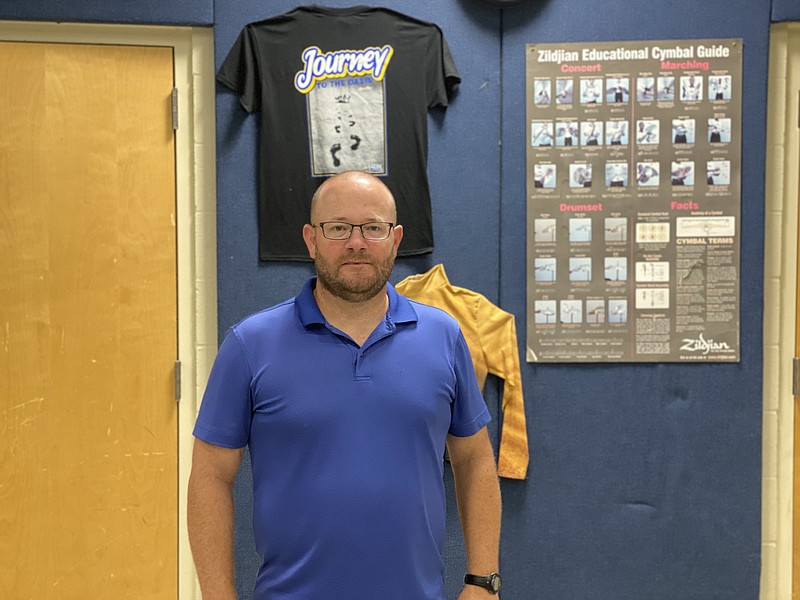 Scott "Rudy" Villines, Lakeside High School band director, said he is looking forward to the start of a "normal" school year this fall.

"I'm really looking forward to the show, looking forward to hopefully a normal year, where we're not having to wear masks and bell covers ... with everybody 6 feet apart. That was a real challenge last year, and I was very impressed with how our students met the challenge," Villines said.

"This year, we're hoping to get back to normal and go all-in on this show. I'm hoping our audience will enjoy it as much as I think they will. I hope they'll come out to a football game or competition and see us."

The Showband of Lakeside will be performing "Rev" for its marching band season.

"Rev," with the theme of cars racing and revving up and lots of power in motion and energy, features five different pieces of music, including "Ignition," "Torque," "Great Wide Open," "Hell Yeah," and "Lingus."

Luke Zamprell is the program coordinator, Alex Thode is the music arranger, Cole Williams is the percussion arranger and Teresa McCraney, Lakeside band director, is the color guard coordinator.

The other band directors are Neal Moss and Carl McCraney.

"In January, everyone starts to meet, tossing around ideas and trying to come up with a theme. Once we kind of have a theme that we like, then we start figuring out music that would fit that theme and bring the show along and kind of convey the meaning," Villines said.

The team then goes on to the color guard uniforms and flags to figure out the visual props they will have.

"Part of our program designer's job is to work on making sure that the color guard uniforms bring out what we want to in the show and give us a visual look," Villines said.

"Our non-color guard members are winds and percussion; we actually have a different uniform top for them as well. Our normal uniform, we wear that at football games, we were at parades, but for the halftime show, we actually have a custom top that the students will wear that goes along with the design of the show," he said.

"It's kind of a long process of just ideas and then hone in on one that we think will be interesting for our kids and our audience and then go with it," Villines said.

This year's show, the directors wanted it to be fun and fast and to have a completely different feel than the shows from the past couple of years, he said.

The show will have eight large 6-foot by 9-foot panels on the field as visuals with images to help convey the meaning.

"We'll have 16 images because we'll have eight of the big props, and then we'll be able to flip them around. That is a big part of marching these days is having props to help," Villines said.

"These images help the audience understand, this is about cars and revving up your engine and driving fast," he said.