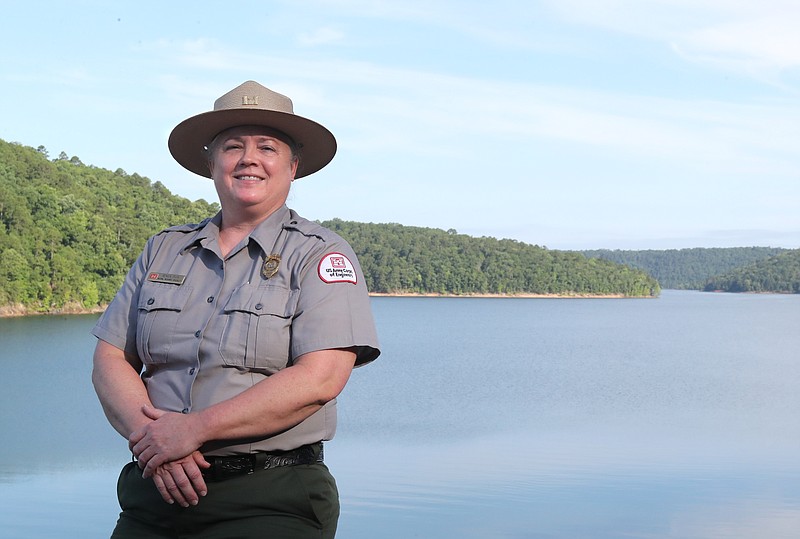 Renea Guin, a natural resources specialist with the U.S. Army Corps of Engineers, decided to join the agency because of her love for the outdoors.

Guin was looking for a job that would take her outdoors, regardless of whether it was the Corps of Engineers, forestry or another position geared around the great outdoors.

Guin grew up on DeGray Lake, and wanted to get hired on to the staff there, so she started volunteering, because she wanted the managers to get to know her work ethic.

"When a job opening came about, I took advantage of it, and since they knew me, it worked out well," Guin said.

She was with DeGray Lake for 20 years as a park ranger and is currently serving her third year at Lake Ouachita.

"I have done a little bit of everything," Guin said.

She said that she loves every bit of being a part of the Corps of Engineers. In her early years, she started more outdoors, but when she got promoted, she spent a lot more time indoors, but was still able to get out and do programs for schools and the lake.

"I love the people you get to meet, a very diversified group of people out there camping. We get people from all over the United States that come to Lake Ouachita. It's a unique lake. It's one of the cleanest and clearest lakes in Arkansas. It's a beautiful lake," Guin said.

She said the Corps of Engineers is not just about park rangers; it manages the land and the water, as well.

"We manage those resources for the public and to do that we are managing the timber, we're managing the wildlife that's on the land, plus we're helping the Arkansas Game and Fish Commission manage the fish in the water whenever they do surveys of the kinds of fish" in the lake, Guin said.

"We also engage the public. We want to make sure that the public is aware of our stewardship, and we help them to understand to be better stewards of the land themselves," she said.

The Corps of Engineers has programs about the environmental aspects such as how to take care of the land, courses about water safety and wildlife programs.

"We do all kinds of programs to help the public be better informed about the land and to help us take care of it," Guin said.

She said that water and boat safety is important because they want everyone to go home safe. At Lake Ouachita for the year, they have anywhere between 3.5 to 4 million people who visit the lake.

"We want to make sure they come home safely. We do have programs to help keep them informed. We put out flyers; we have banners and billboards up; we put out all kinds of water safety messages to help keep our public and each and every individual safe so that they can go home to their families," Guin said.

"(In the geocaching program), we usually have a little water safety trinkets and messages in there that they can take home with (them to) help remind them about water safety," she said.

The Corps of Engineers also does impromptu programs in campgrounds; while they don't have any set at the moment, the state park does.

"If we see a group of kids with a family or something, we might stop and do about a 10-minute water safety program," Guin said.

"We'll also hit the beaches (and) do water safety programs on our beaches," she said.

The water safety programs emphasize swimming with a buddy, not swimming alone, and wearing a life jacket.

The Corps of Engineers maintains over 1,100 campsites and 20 boat ramps on Lake Ouachita. Boating, fishing, scuba diving and island camping are especially popular, the website says.

The land surrounding Lake Ouachita is part of the Ouachita National Forest, which encompasses 1.8 million acres in central Arkansas and southeastern Oklahoma. The ONF is managed by another federal agency, the U.S. Forest Service.

"We have boat patrols during the summer. We're out there on the water every day on boat patrol trying to remind everybody to wear their life jackets and stay safe," Guin said.

"We are two separate entities and don't work with a state park at all, but the state park has activities," Guin said.

She said that the Corps of Engineers recreation areas offer access to hiking trails that citizens can go on, along with boating, swimming and fishing on Lake Ouachita.

"The LOViT (Lake Ouachita Visita) Trail is a nice trail to go hiking on. We have (a) scenic (view that citizens can) overlook the lake," Guin said.

Lake Ouachita is popular with visitors all year long. Lake access is available year-round, along with camping and certain campgrounds. During the summer, all of them are open, including island camping.

Other activities are shoreline cleanup in September and the geocaching program.

Seeing the lake and its beauty is what makes Guin get up every morning to go to work.

"We have a good group of co-workers; they're fun, we get along well and interact. It's fun. Getting to come out and see this beautiful lake every day is quite nice," Guin said.

"We want everybody to know their limits and inspect their equipment and wear their life jackets and be aware when they're out here on (the) lake that the water is nice and fun, but it's dangerous too," Guin said.

For any more information, visit https://www.usace.army.mil/Missions/Civil-Works/Recreation/National-Water-Safety_Program/.