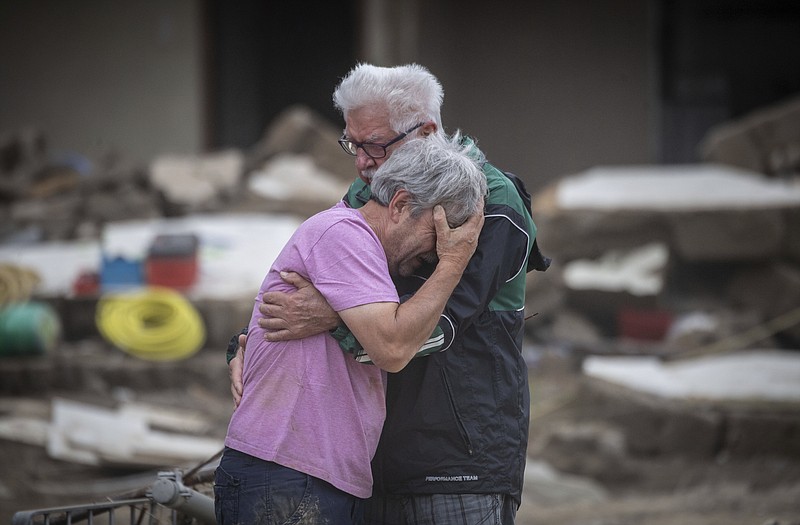 Two brothers weep in each other's arms in front of their parents' house, which was destroyed by the flood in Altenahr, Germany, Monday, July 19, 2021. Numerous houses in the town were completely destroyed or severely damaged, there are numerous fatalities. (Boris Roessler/dpa via AP)

BERLIN -- German officials defended their actions ahead of last week's severe floods that caught many towns by surprise and killed 196 people in Western Europe, but they conceded that more lessons can be learned from the disaster.

As floodwaters receded Monday, authorities continued searching for more victims and intensified their efforts to clean up a sodden swath of western Germany, eastern Belgium and the Netherlands.

So far, 117 people have been confirmed dead in the worst-affected German region, Rhineland-Palatinate, while 47 were killed in the neighboring state of North Rhine-Westphalia, and at least one in Bavaria, parts of which saw heavy rain and flooding over the weekend. The death toll in Belgium was 31.

Authorities said they were likely to find more victims among destroyed homes.

Weather officials had forecast the downpours that led to even small rivers swelling rapidly, but warnings of potentially catastrophic damage didn't appear to have made it to many people in affected areas -- often in the middle of the night.

Federal and state authorities faced criticism from some opposition politicians over the disaster, which comes as a national election looms in September. But Interior Minister Horst Seehofer dismissed suggestions that federal officials had made mistakes and said warnings were passed to local authorities "who make decisions on disaster protection."

"I have to say that some of the things I'm hearing now are cheap election rhetoric," Seehofer said during a visit to the Steinbach Reservoir in western Germany, where authorities say they no longer fear a dam breach. "Now really isn't the hour for this."

Seehofer underlined that message during a visit Monday to Bad Neuenahr, in the worst-hit area, but said authorities will have to draw lessons once the immediate relief phase is over.

"Wherever we can improve anything -- in alarms, in equipment ... we must do so," he said. "We owe that to the families who have been affected, and above all to the victims."

The head of Germany's civil protection agency said the weather service had "forecast relatively well" and that the country was well-prepared for flooding on its major rivers.

But, Armin Schuster told ZDF television Sunday night, "half an hour before, it is often not possible to say what place will be hit with what quantity" of water. He said 150 warning notices had been sent out via apps and media.

He said "we will have to investigate" where sirens sounded and where they didn't.

Officials in Germany's Rhineland-Palatinate state said they were well-prepared for flooding, and municipalities were alerted and acted.

But the state's interior minister, Roger Lewentz, said after visiting the hard-hit village of Schuld with Chancellor Angela Merkel on Sunday that "we, of course, had the problem that the technical infrastructure -- electricity and so on -- was destroyed in one go."

Local authorities "tried very quickly to react," he said. "But this was an explosion of the water in moments. ... You can have the very best preparations and warning situations (but) if warning equipment is destroyed and carried away with buildings, then that is a very difficult situation." Cellphone networks also were knocked out by flooding.

Broader questions about Germany's emergency warning system had arisen after a nationwide test in September 2020, the first in 30 years, largely failed. Sirens didn't sound in many places, or had been removed after the end of the Cold War, and push alerts from the national warning app arrived late or not all.

Schuster, the head of the civil protection agency, noted that a program to reform civil protection was launched earlier this year, including a drive to encourage local authorities to install more sirens. Germany doesn't have a text messaging system for disaster warnings, but Schuster told Deutschlandfunk radio it is exploring the possibility.

As local communities face the huge task of rebuilding smashed homes and infrastructure such as bridges and water systems, Merkel's Cabinet is set to draw up a package of immediate and medium-term financial aid Wednesday.

At the Steinbach Reservoir, North Rhine-Westphalia state governor Armin Laschet said the dam was designed for a risk that might occur once in 10,000 years.

"This was exceeded in the last few days," he said. "It was a likelihood nobody had foreseen." 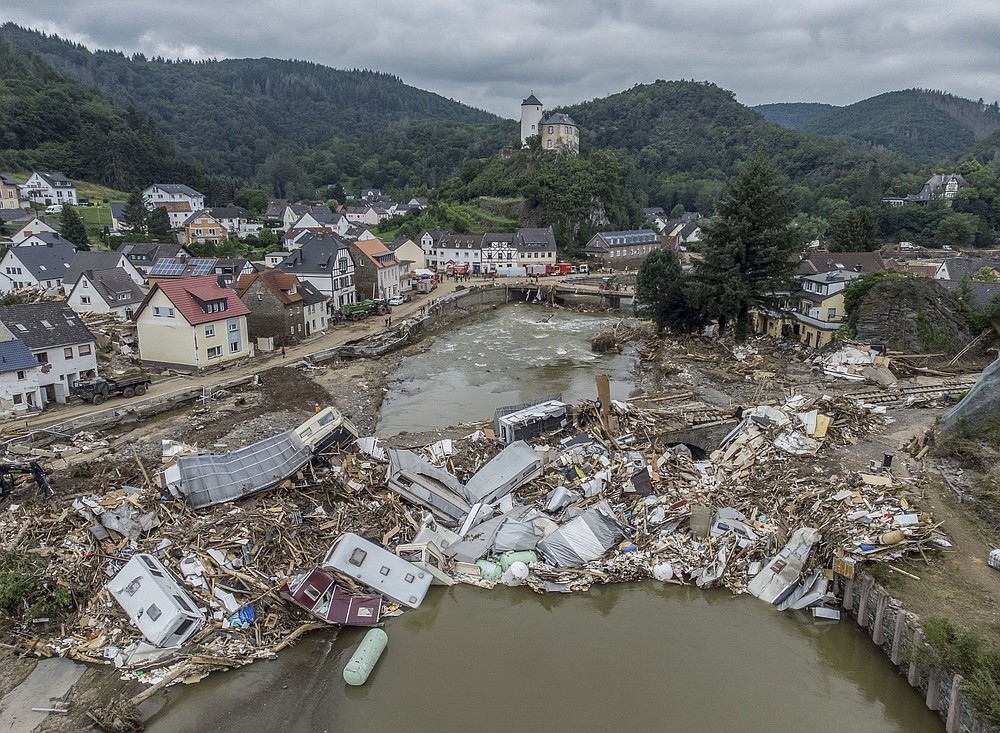 Caravans, gas tanks, trees and scrap pile up metres high on a bridge over the Ahr in Altenahr, Germany, Monday, July 19, 2021. Numerous houses in the town were completely destroyed or severely damaged, there are numerous fatalities. (Boris Roessler/dpa via AP) 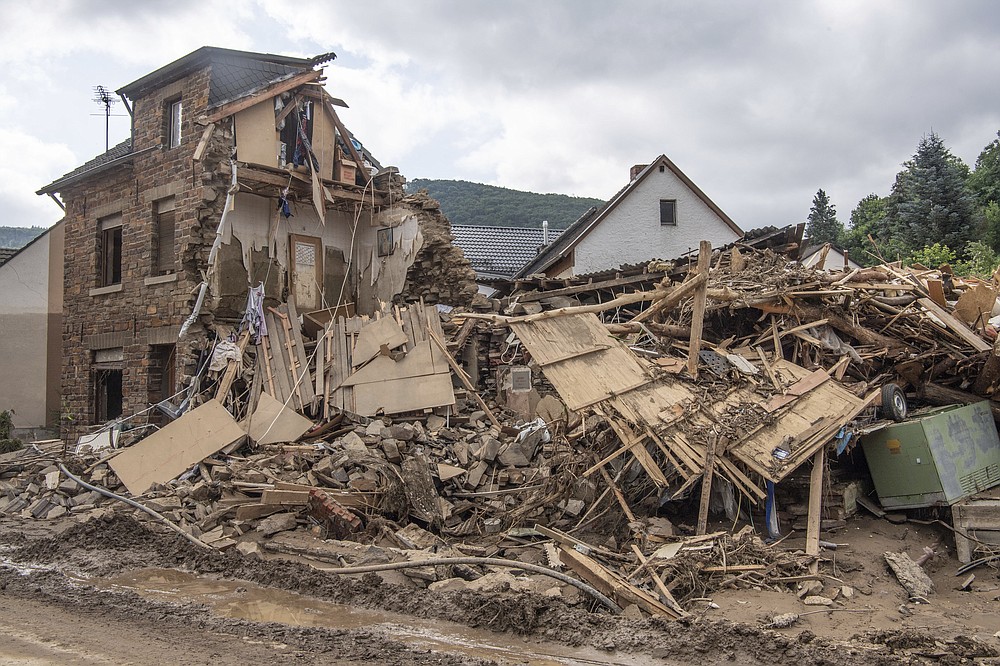 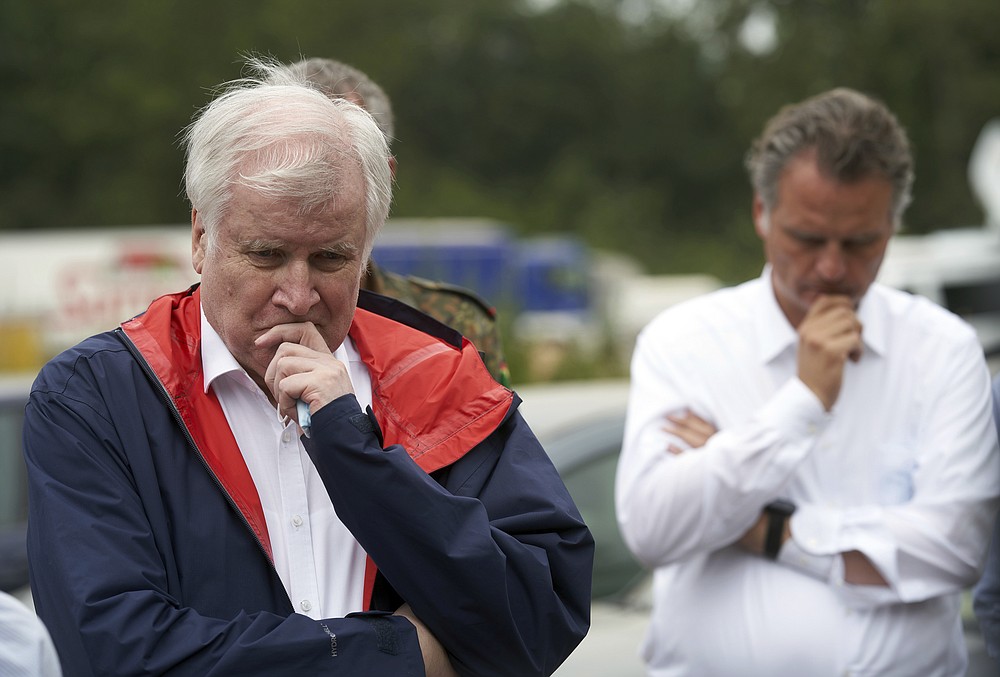 Federal Minister of the Interior Horst Seehofer, left, gives a press statement during a visit to the Federal Agency for Technical Relief (THW), which is on flood duty there in Bad Neuenahr, Germany, Monday, July 19, 2021. (Thomas Frey/dpa via AP) 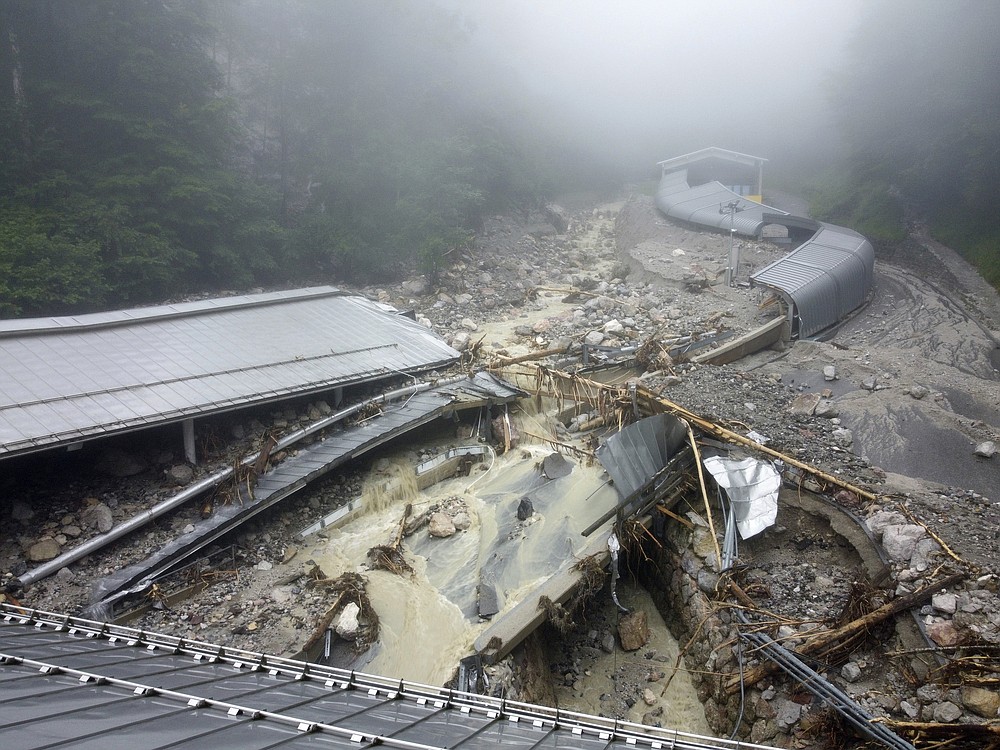 The bobsleigh and luge track is completely destroyed by debris due to the severe storm in the night of July 18, in Konigssee, Germany, Monday, July 19, 2021. (Peter Kneffel/dpa via AP) 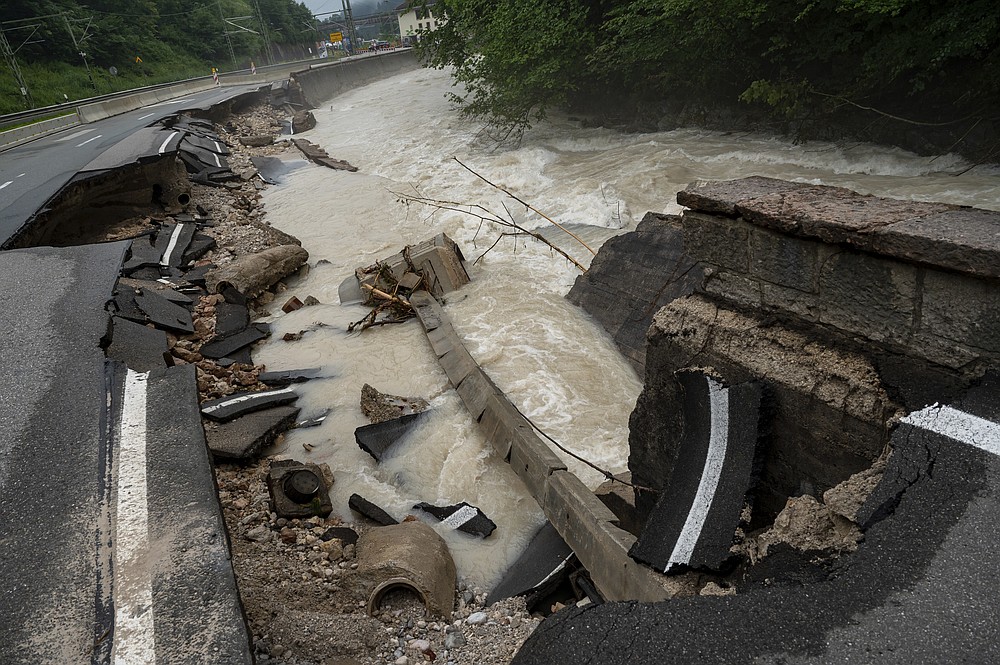 A federal road is swept away by the floodwaters in the Ramsauer Ache near Berchtesgaden, Germany Monday, July 19, 2021. About 130 people were evacuated in Germany’s Berchtesgaden area after the Ache River swelled. (Peter Kneffel/dpa via AP) 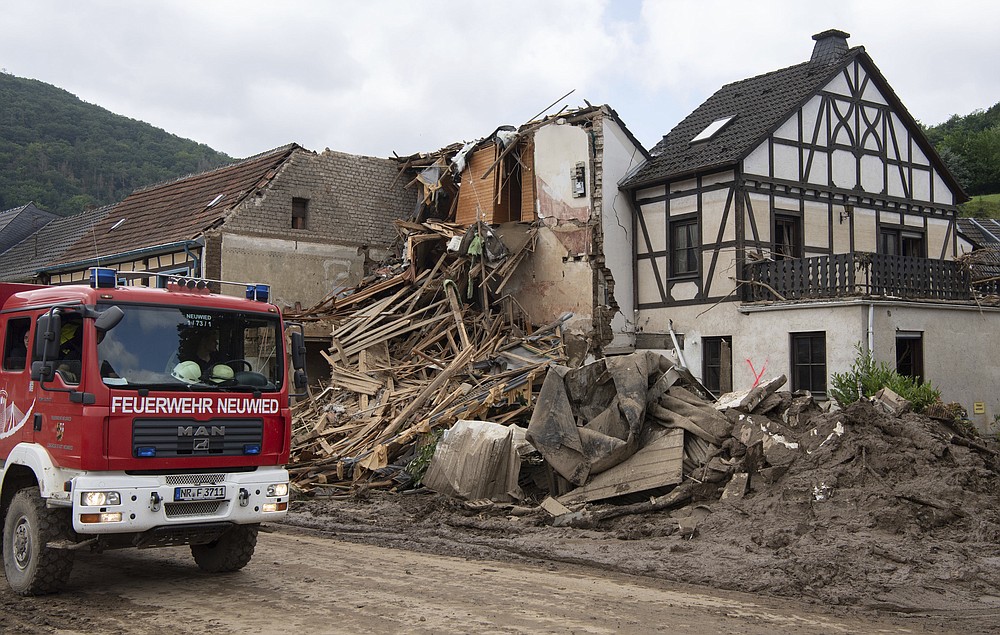 Firefighters stand in front of a destroyed house in Altenahr, Germany, Monday, July 19, 2021. Numerous houses in the town were completely destroyed or severely damaged, there are numerous fatalities. (Boris Roessler/dpa via AP) 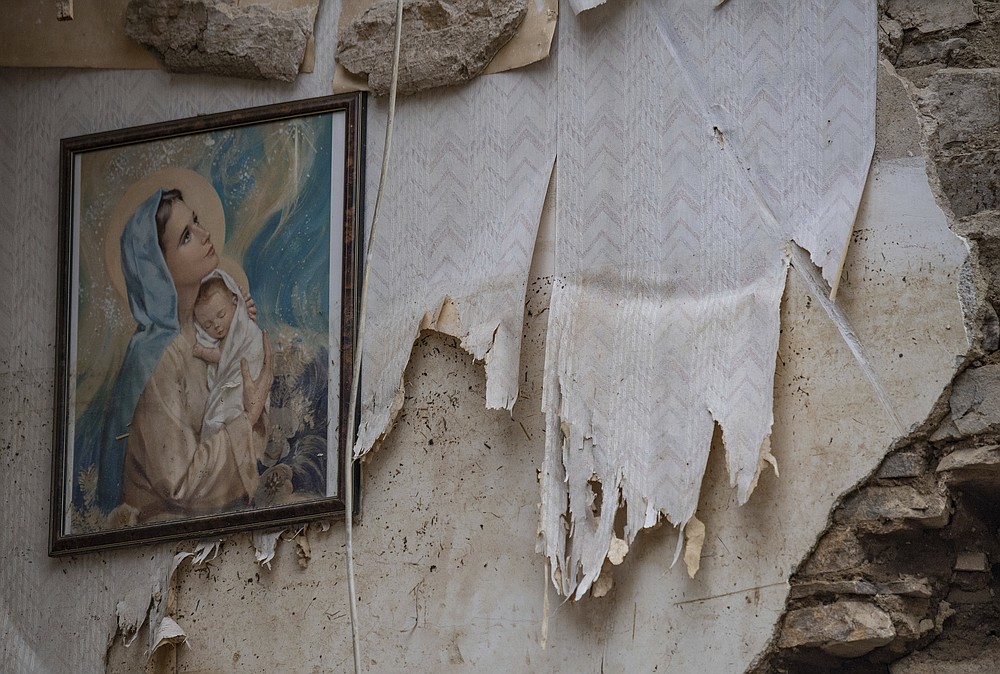 A picture of St Mary hangs in the attic of a house in Altenahr, Germany, Monday, July 19, 2021. Numerous houses in the town were completely destroyed or severely damaged, there are numerous fatalities. (Boris Roessler/dpa via AP) 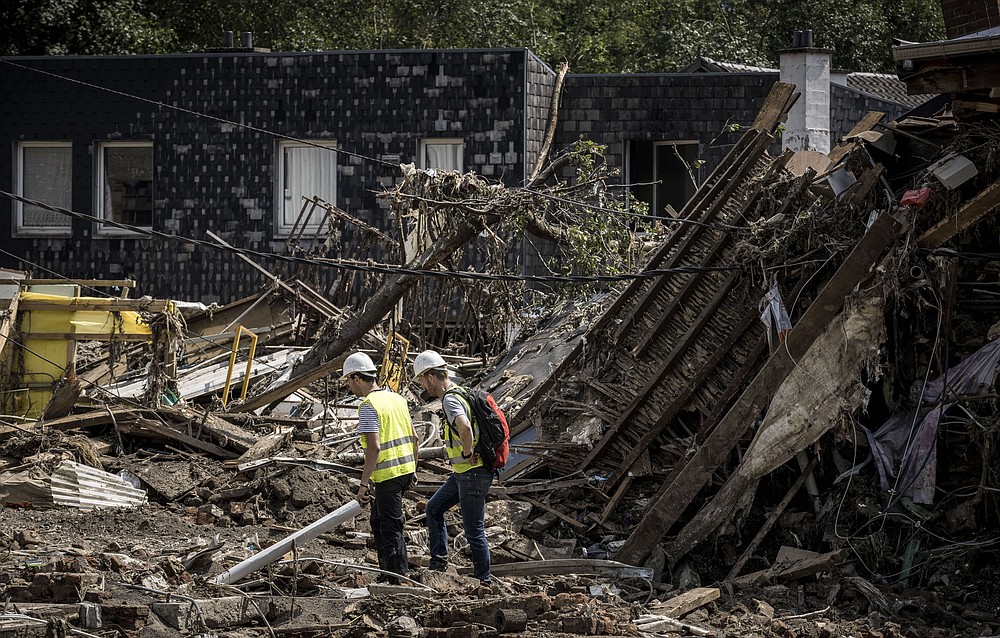 Workers look through the rubble of houses after flooding in Liege, Belgium, Monday, July 19, 2021. Residents in several provinces continued to clean up after severe flooding in Germany and Belgium turned streams and streets into raging torrents that swept away cars and caused houses to collapse. (AP Photo/Valentin Bianchi) 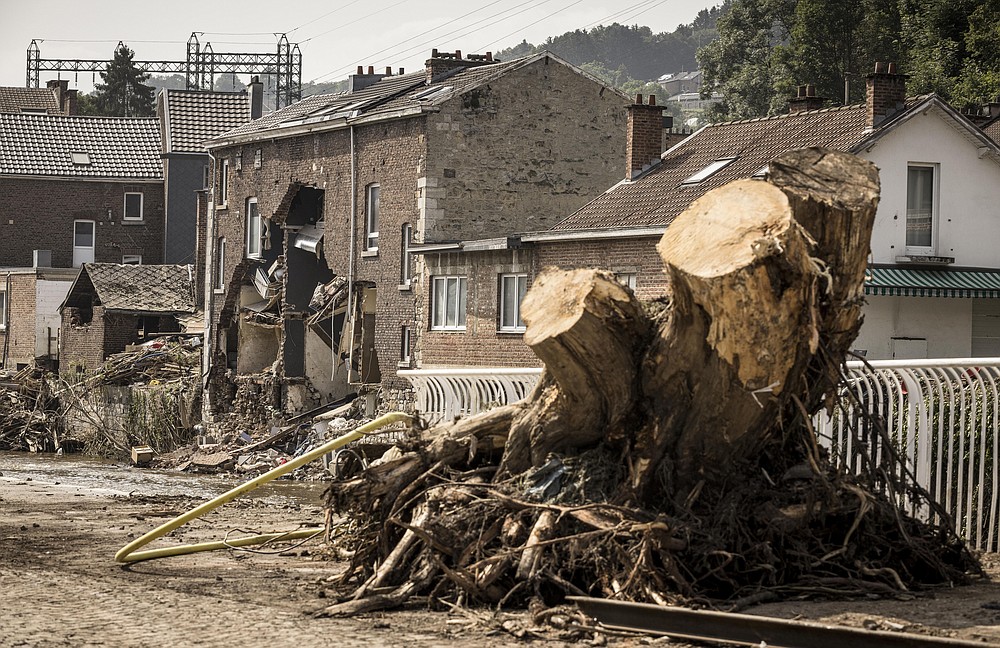 A large tree stump stands in the street among damaged houses in Pepinster, Belgium, Monday, July 19, 2021. Residents in several provinces continued to clean up after severe flooding in Germany and Belgium turned streams and streets into raging torrents that swept away cars and caused houses to collapse. (AP Photo/Valentin Bianchi)