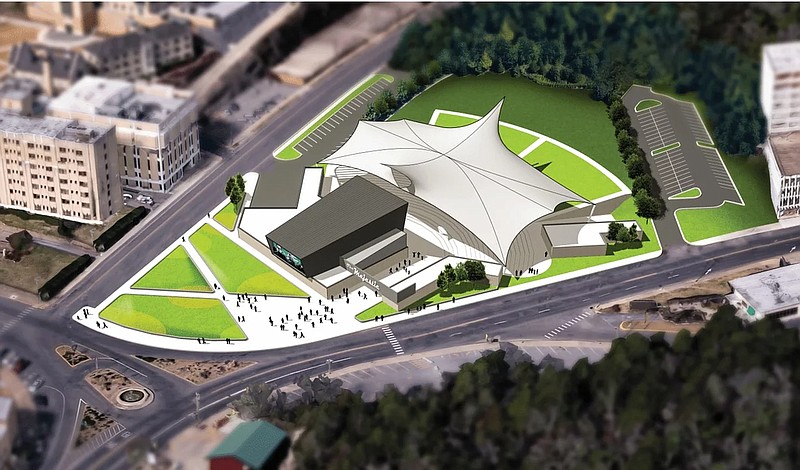 An architectural rendering of the proposed Majestic Entertainment Pavilion. The image is courtesy of R.A. Wilson Enterprises Inc. - Submitted photo

Excavators scraping the property bare in the fall of 2016 was the last significant activity at the Majestic Hotel site, but action the Hot Springs Board of Directors took Tuesday night promises to return life to the barren 5 acres that’s sat idle for 15 years.

The board’s 6-1 vote ratified a contract to sell the property to R.A. Wilson Enterprises for the purpose of developing and constructing an outdoor entertainment venue on Park Avenue. According to the contract, $100,000 of the $2,163,128 sale price will be put in an escrow fund by the end of the week. The deposit becomes nonrefundable at the end of the 180-to-270 day due diligence period.

R.A. Wilson will provide the city a memorandum of agreement with the venue’s operator prior to the close of sale. The local commercial real estate development company has been in discussions with the Walton Arts Center, the owner of the Walmart Arkansas Music Pavilion in Rogers, to run the 6,000-capacity venue. WAC’s present/CEO submitted a letter of support expressing the nonprofit’s interest in operating the site.

District 1 Director Erin Holliday was the only board member who opposed the sale. She told Wilson she wasn’t opposed to the project but had reservations about approving the sale without the board having more options to consider. The city’s two requests for proposals returned one responsive submission, which the board dismissed in March.

Holliday said she’d like to see the city put out a third solicitation for proposals. The Majestic site is in her district.

“The biggest challenge that I personally have with this, and this is by no means a reflection of the project, because quite frankly I think the project is cool as hell, but I think that when you have the opportunity to parse through several options to find the best, that is the best way to move forward,” she said. “It’s difficult for me to be excited about something when we don’t have anything else to consider at the moment.”

The $2.16 million offer the board accepted represented the solid waste fund’s investment in the site. The cost of purchasing the site, demolishing its condemned structures and clearing it of environmental liabilities was appropriated from the city’s sanitation fund. 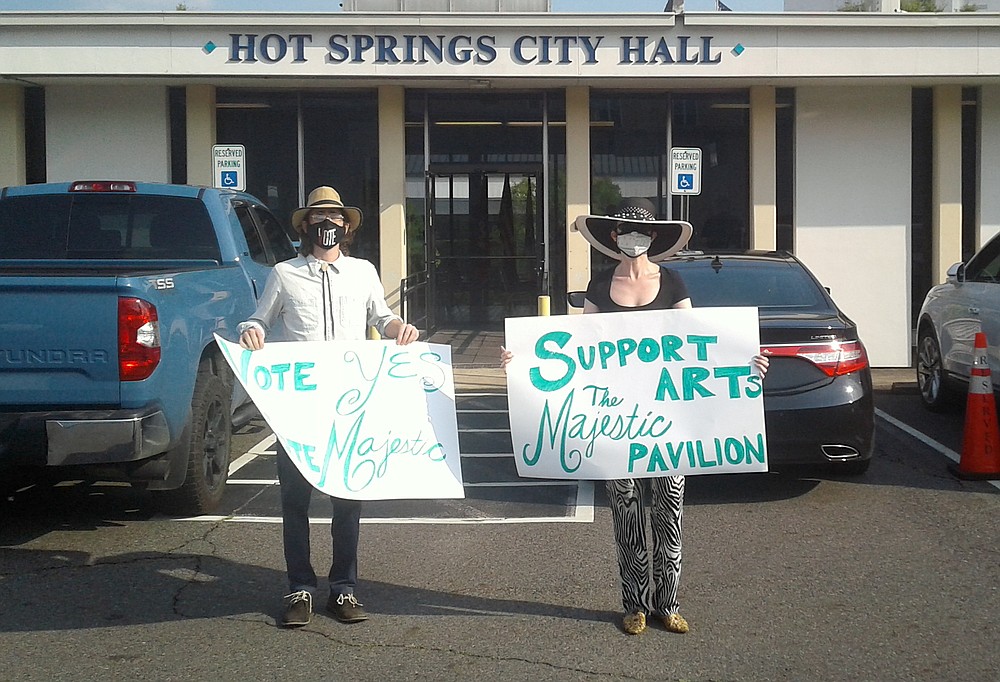 Ben Droz, left, and Rie Schaffer show their support for The Majestic project Tuesday at City Hall. - Photo by David Showers of The Sentinel-Record

A $2,170,000 offer for the Majestic Hotel site was tendered Monday, less than 36 hours before the Hot Springs Board of Directors convenes tonight to consider a $2,163,128 offer to buy the property and redevelop it into an outdoor entertainment venue.

VIPA's offer was delivered to City Hall on Monday, but Burrough said the company indicated in an email he received Sunday night that it would be making an offer.

The real estate contract the board will consider tonight stipulates R.A. Wilson will purchase the property for the sole purpose of constructing and developing an outdoor entertainment venue. The company has to provide a memorandum of agreement with the venue operator before the sale can close, according to the contract. 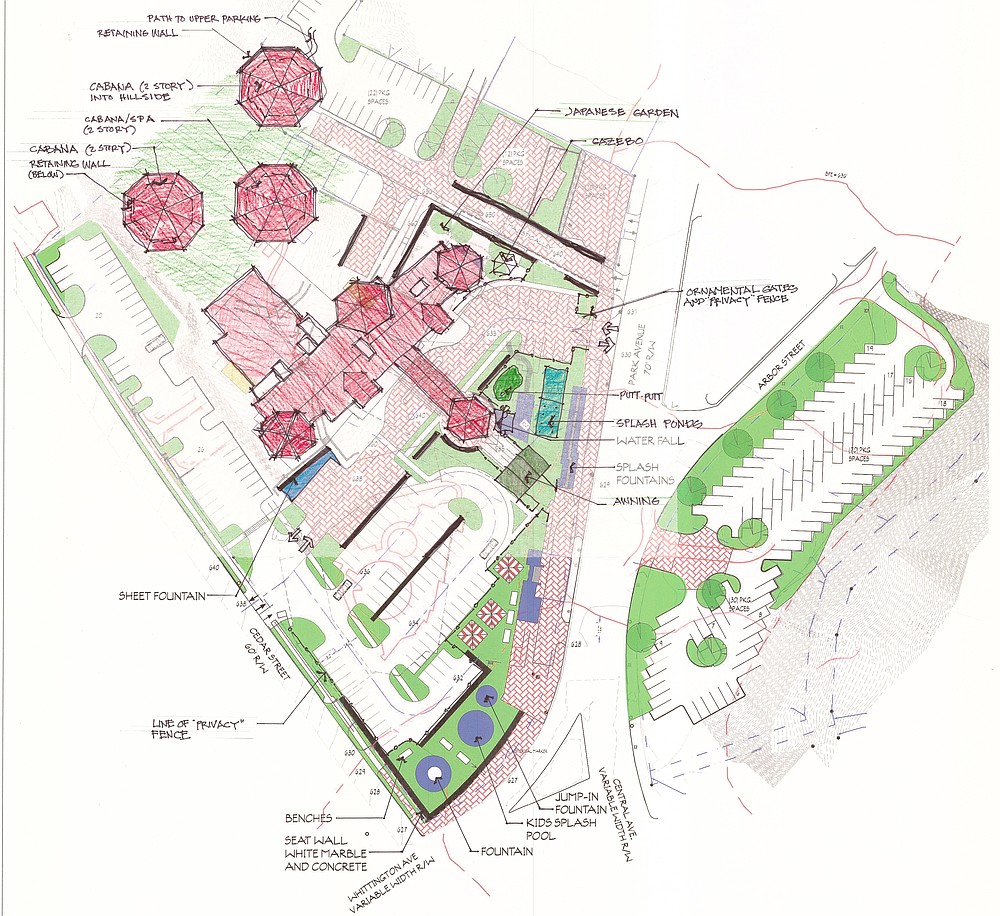 The Walton Arts Center, which operates the Walmart Arkansas Music Pavilion in Rogers, has been in discussions with R.A. Wilson to operate the 6,000-capacity venue it's proposed for the 5 acres the city owns on Park Avenue.

The city didn't receive a formal offer from VIPA until Monday, but Dr. Vijay Patel, VIPA's chairman of the board and president, said the city has been aware of his company's interest in the property for more than two years. An email he sent Burrough in August 2019 indicated VIPA's interest in buying the property at the value set by the appraisal firm the Garland County assessor's office contracts.

The $2.17 million offer is part of the Falling Water Resort at the Majestic concept VIPA presented during public planning sessions in April 2019. A VIPA-affiliated company acquired the Medical Arts building earlier this year. Parth Patel, VIPA's president of development and Dr. Patel's son, has told The Sentinel-Record he plans to build a Marriott Aloft-branded hotel in the 16-story Art Deco building.

"I made the offer to purchase way before, in August of 2019," Dr. Patel, whose company has developed or acquired more than half a dozen hotels in the Hot Springs area, including the Home2Suites by Hilton Hot Springs on Lake Hamilton, said. "I was in the game way before the amphitheater guys were in the game. My offer was not even acknowledged. No response from the city manager, city mayor or city board.

"All I want is some recognition that I would like to buy it just like anybody else wants to buy it. It's public land. I have assets in Hot Springs. I'm interested in our state. I have a vision of what to do, which was publicly presented."

Burrough said Monday that Dr. Patel's August 2019 email came at a time the city was weighing the feasibility of ideas presented during public planning sessions the University of Arkansas Fay Jones School of Architecture facilitated at the Hot Springs Convention Center in April 2019.

"At that time, we were not in the market to sell the property," he said. "We wanted some type of long-term lease potentially, but we didn't know what the market would hold for that site. We heard great ideas (during the public planning sessions), which was everything from a hot-air balloon ride to a resort hotel."

VIPA didn't respond to the two requests for proposals the city issued last year. Grand Point Investment Group and Cienda Partners' submission for a $110 million thermal water resort was the only proposal the city said was responsive to its two solicitations. The Dallas-based group and DHM Design of Colorado, which proposed designing a thermal pool complex the city would have to find investors for, were the only respondents to both RFPs.

The board moved on from Grand Point and Cienda's proposal in March after questioning the Dallas group's wherewithal to execute their ambitious proposal. R.A. Wilson made its offer public the following month.

"With all due respect to Mr. Patel, they didn't submit a project in either one of those proposals," Burrough, referring to the two RFPs, said. "There was no proposal to consider. Here we are today in these negotiations with R.A. Wilson, and we receive another offer that I would consider to be at the eleventh hour.

"I think as a board, it has to consider what's in front of them today before we can consider another offer. My recommendation is they move forward with whatever decision they're going to make with Mr. Wilson prior to entertaining any other offers."

Dr. Patel said the timing wasn't right for VIPA to submit a proposal. Lenders were reluctant to finance hospitality projects during the economic uncertainty brought on by the pandemic, he said, explaining that many hoteliers were defaulting on loans as occupancy rates plummeted in response to changing consumer patterns and public health directives limiting travel.

The Patels said they asked the city in March of last year to postpone the RFP process for a year.

"It would've been impossible to get financing last year," Dr. Patel said. "There were no banks that were willing to finance a dime for anything that has to do with tourism."

He said his offer should be considered, even if it was delivered on the eve of tonight's board meeting.

"It's not the timing that I wanted, submitting it at the last minute, but this was the last day," Dr. Patel said. "If I didn't act, it would be done forever. I wanted to have at least one shot at purchasing the lot before the city actually sells it. The city should be respectful to look at my offer and give me a chance. I happened to be here and found out the city is meeting (today). This is the only day I could act, so I chose to submit the offer."

Wilson questioned the timing, noting that the contract the city received Monday doesn't stipulate what would be built on the site.

"I think the timing of the offer is very suspect," he said. "Mr. Patel has had an abundance of time to develop his hotel plan, which include parking, traffic, mobility, daytime traffic and disturbances, and submit it to the city along with his offer, yet chose not to do that or provide any of that supporting detail. It suggests it's meant to be nothing but a roadblock for some personal aggrandizement.

"For this to get any credence after the detail and the planning our professional team has created and provided to the city board, and the vetting the board has done, is very skeptical. I think the board will realize the same, that it's unrealistic."

VIPA's intent to build two upmarket hotels close to each other should be viewed with skepticism, Wilson said.

"How much sense does it make to build two high-end hotels within one block of each other?" he said. "Now they're going to build a high-end hotel at the Majestic. It would be the same as me deciding I was going to buy the Arlington Hotel, tear it down and build a second amphitheater."

"I have a lot of respect for Vijay and Parth Patel, and I'm very appreciative of what they're doing in our community and their recent purchase of the Medical Arts building," he said. "It's nice to know that they have an interest in doing even more in the city of Hot Springs."