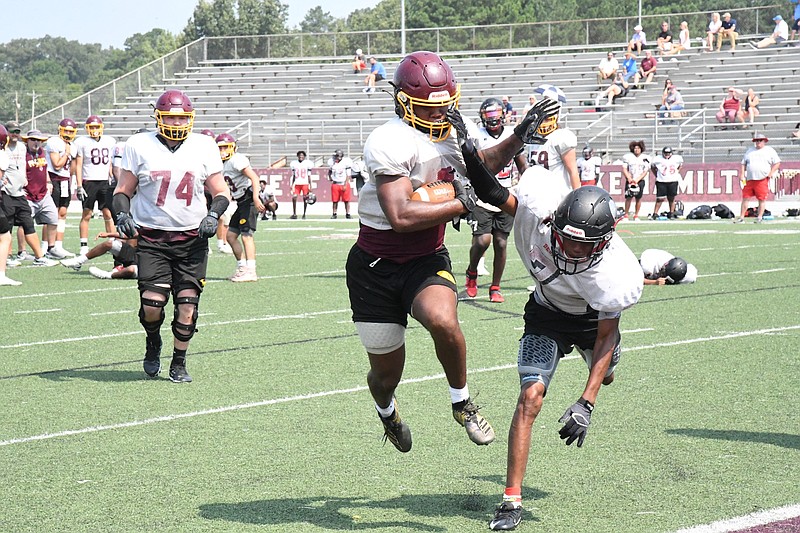 Lake Hamilton's Kendrick Martin tries to shed a tackle against Jacksonville during Tuesday's team camp at Wolf Stadium. - Photo by Tanner Newton of The Sentinel-Record

The day included scrimmages between each of the teams and gave Lake Hamilton an opportunity to finally play other squads.

"I thought they went well," Lake Hamilton head coach Tommy Gilleran said. "I thought we worked on some things and got to see some things that we need to do to get better. Overall just having to go against somebody else helps us out because we're always practicing against ourselves, so it's good to see other people."

Coming off a successful 11-2 season and a trip to the state championship game, the expectations surrounding the team this year are high.

"I think our expectation is to go back to the final and have a chance to win it," Gilleran said. "I think (the team) is handling it OK now until we get closer to the season. I think they understand what we need to do to get better."

Pulaski Academy gave the Wolves trouble in the first scrimmage of the day as the Bruins beat Lake Hamilton 21-0.

"When you play a team like PA, you're going to really get a lot out of it," Gilleran said. "Just based on the amount of championships they've won and the expectations for them every year. That's one reason we scrimmage them. We know we want that type of atmosphere that we have to work on our game. Those guys are good; if you can compete with those guys, you can compete with anybody."

Lake Hamilton bounced back against Jacksonville with two good offensive drives and dominant defensive stops to earn a 14-0 win.

"I thought our kids came off the ball well and played hard and executed offensively," Gilleran said. "Defensively, the front four played well and kept people from running the ball."

Looking forward to the regular season, the threat of COVID-19 still represents one of the biggest challenges for Gilleran and his team.

"First of all COVID will be number one," Gilleran said. "Making sure that doesn't come through our team and dodging those types of things."

Although Gilleran said the team is past most of its major COVID-19 restrictions, he is still telling the team to make sure to wash their hands, and he emphasized his squad understands the coronavirus better now.

"The stuff we've been doing we know makes it work," Gilleran said. "Whatever the different types of things we've been doing to make sure it doesn't come around and doing those things is what we really have to focus on."

The Wolves open their season on Aug. 27 against Lakeside and travel to Arkadelphia on Aug. 16 for their annual benefit game.