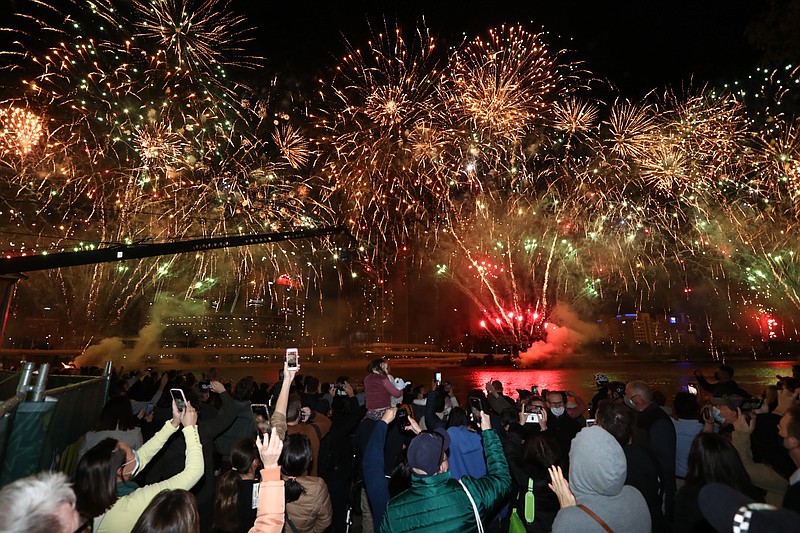 People celebrate in Brisbane, Australia, following Wednesday's announcement by the International Olympic Committee that Brisbane was picked to host the 2032 Olympics. The Australian city was the inevitable winner of a one-candidate race steered by the IOC to avoid rival bids. - Photo by Jason O'Brien/AAP Image via The Associated Press

TOKYO -- Brisbane was picked Wednesday to host the 2032 Olympics, the inevitable winner of a one-city race steered by the IOC to avoid rival bids.

The Games will go back to Australia 32 years after the popular 2000 Sydney Olympics. Melbourne hosted in 1956.

"We know what it takes to deliver a successful Games in Australia," Prime Minister Scott Morrison told International Olympic Committee members in an 11-minute live video link from his office.

When the award was later confirmed, with Brisbane winning the vote 72-5, Morrison raised both arms in the air and gave two thumbs up.

The victory led to a fireworks display in Brisbane that was broadcast to IOC members in their five-star hotel in Tokyo.

Brisbane follows 2028 host Los Angeles in getting 11 years to prepare for hosting the Games. Paris will host in 2024.

The 2032 deal looked done months before the formal decision at the IOC meeting, which was held ahead of Friday's opening ceremony of the Tokyo Games.

Though the result was expected, a high-level Australian delegation went to Tokyo amid the COVID-19 pandemic to present speeches, films and promises on stage.

They were joined by long-time Australian Olympic official John Coates, now an IOC vice president who shaped the fast-track selection process two years ago that now rewarded his Brisbane bid.

The first-time format was designed to cut campaign costs, give the IOC more control in dealing discreetly with preferred candidates and removed the risk of vote-buying.

The project was described by the IOC as "a passion-driven, athlete-centric offer from a sports-loving nation." Events will be staged across Queensland, including in Gold Coast, which hosted the 2018 Commonwealth Games.

Brisbane's renowned cricket stadium, known as the Gabba, will be upgraded and may host the sport at the Games. Cricket was played once at the Olympics, at the 1900 Paris Games.

The next three Summer Games hosts -- starting with Paris in 2024 -- are now secured in wealthy and traditional Olympic nations without any of the trio facing a contested vote.

The IOC and its hands-on president, Thomas Bach, have torn up the template of traditional bidding campaigns and hosting votes to lock down preferred cities with the minimum risk.

Paris and LA were competing for 2024 until Bach and Coates oversaw including the 2028 rights in an unprecedented double award four years ago.

The future hosts offer stability for the IOC which was stung by the two previous Summer Games contests being tainted by allegations of vote-buying when multiple cities were on the ballot.

The 2016 Rio de Janeiro Olympics and the postponed 2020 Tokyo Olympics are still under investigation by French prosecutors. They have implicated officials who then lost their place in the IOC family as active or honorary members.

A low-risk future beckons for the IOC following the often-troubled Tokyo Olympics and the 2022 Beijing Winter Games in February, which will throw scrutiny on China's human rights record.

Key partners have also been secured through 2032. The IOC's signature broadcasting deal with NBC and top-tier sponsors Coca-Cola, Visa and Omega are tied down for the decade ahead.

With only major cities staging the Summer Games from Beijing in 2008 through Los Angeles, Brisbane positioned itself as a new kind of project.

"We want to show the world that mid-sized cities and regions can host the Games without financial distress or missed deadlines," Palaszczuk told voters.

Brisbane said it already has 84% of stadiums and event venues in place to fit the IOC's modern demand of avoiding excessive spending and potential white-elephant projects.

A new swimming arena is planned and billions of dollars will be spent on transport projects -- not because of the Olympics but in time for them, Brisbane officials said. 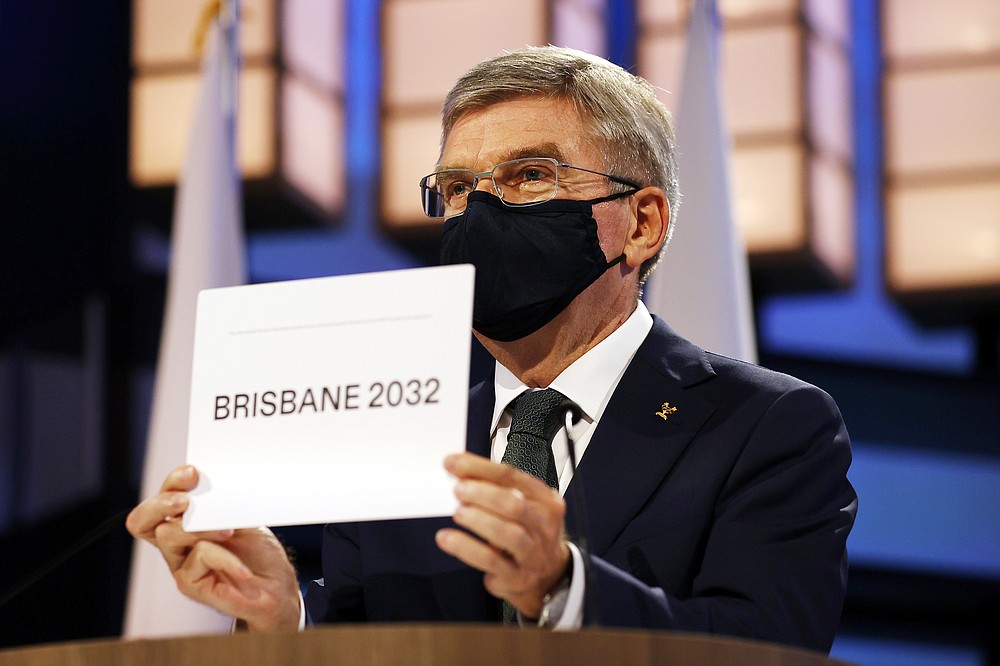 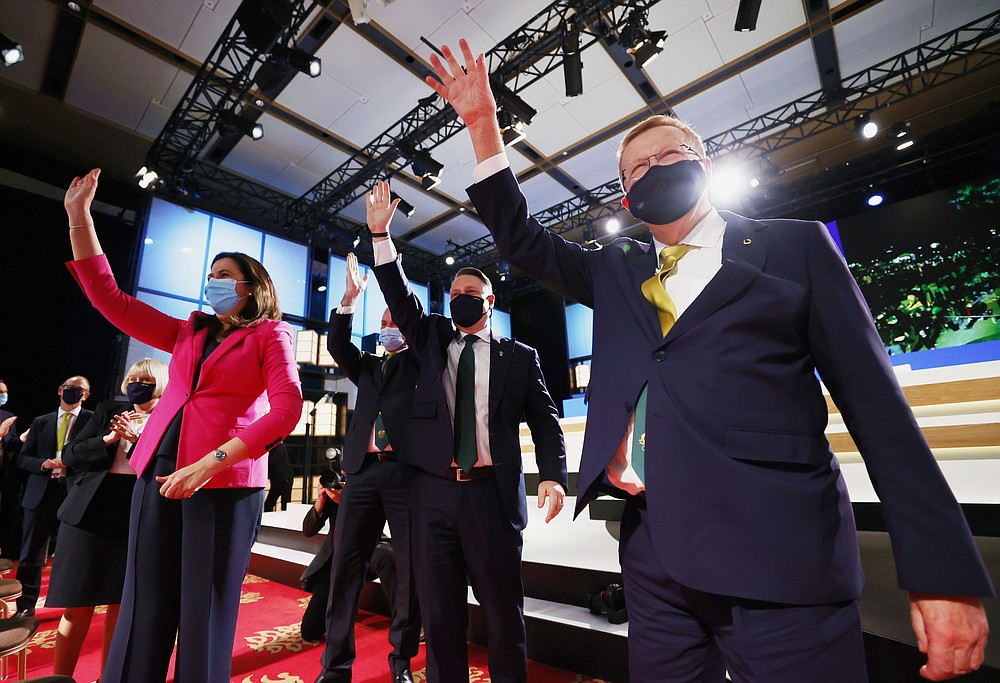 Members of the Brisbane 2032 delegation, from left, the Honourable Annastacia Palaszczuk MP, Premier of Queensland and Minister for Trade, the Right Honourable the Lord Mayor of Brisbane, Councillor Adrian Schrinner, and John Coates AC, President, Australian Olympic Committee, celebrate after Brisbane was announced as the 2032 Summer Olympics host city during the IOC Session at Hotel Okura in Tokyo, Wednesday, July 21, 2021. (Toru Hanai/Pool Photo via AP) 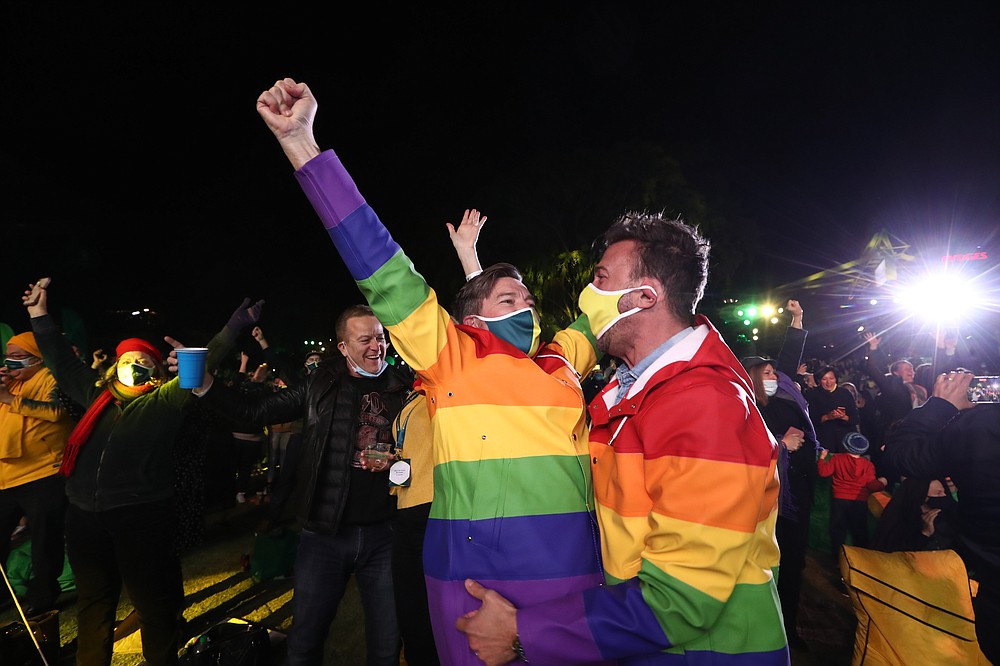 People celebrate in Brisbane, Australia, Wednesday, July 21, 2021, following an announcement by the International Olympic Committee that Brisbane was picked to host the 2032 Olympics. The Australian city was the inevitable winner of a one-candidate race steered by the IOC to avoid rival bids. (Jason O'Brien/AAP Image via AP) 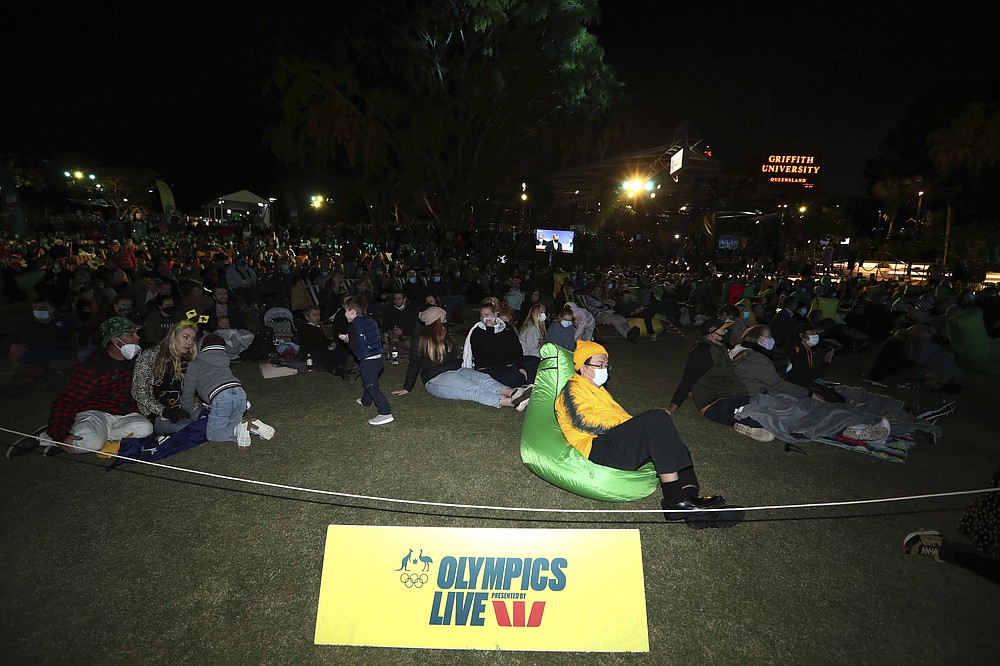 People gather Wednesday, July 21 , 2021, in Brisbane, Australia, for the announcement by the International Olympic Committee (IOC) on 2032 Summer Olympics bid. The Australian city was the inevitable winner of a one-candidate race steered by the IOC to avoid rival bids. (Jason O'Brien/AAP Image via AP)