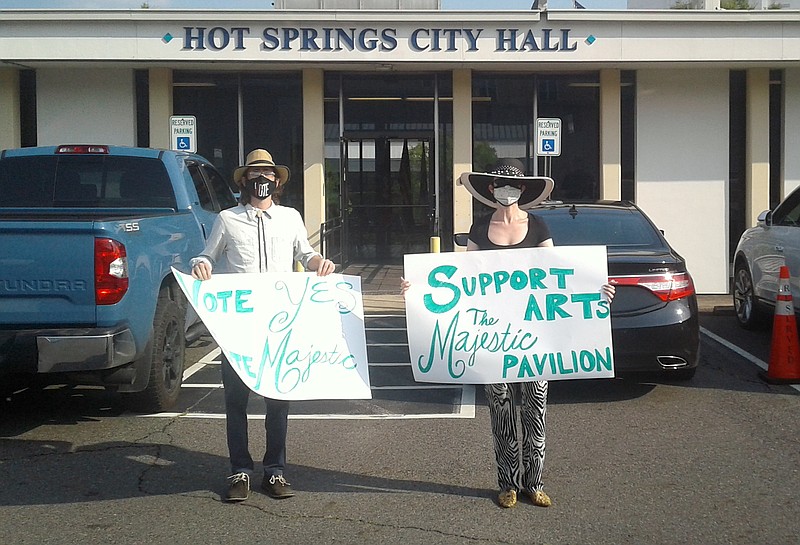 Mayor Pat McCabe told the Hot Springs Board of Directors Tuesday night he had come "full circle" regarding the outdoor entertainment venue proposed for the Majestic Hotel site.

He was part of the six-director majority that adopted an ordinance approving a contract to sell the 5 acres the city owns on Park Avenue to R.A. Wilson Enterprises for the purpose of constructing The Majestic, the 6,000-capacity amphitheater the contract requires R.A. Wilson to build on the vacant site.

The $2,163,128 transaction won't close until the end of a due-diligence period that could take up to 180 to 270 days. McCabe said he's intrigued by what that period will produce: a determination of the feasibility of an amphitheater at the crossroads of upper downtown. He said the Walton Arts Center, the northwest Arkansas nonprofit R.A. Wilson hopes to enlist as the venue's operator, has the expertise to make that determination.

If it determines an amphitheater can be a going concern, then The Majestic will be a success, McCabe said.

"Don't take this wrong, Mr. Wilson, but there is little he has said that has convinced me on this project," he told the board. "He's a developer, and he develops things. He has never developed an amphitheater."

Last week, McCabe talked about opportunity costs, asking what opportunities the city would forgo if the board agreed to put the property under contract. A week later he said the city would miss an opportunity if the board authorized a third request for proposals in lieu of accepting the purchase offer, a conclusion he came to after he and City Manager Bill Burrough's Monday morning conference call with WAC President/CEO Peter Lane.

"(Lane) convinced me that there is no operator in the country that is going to take on this project without proper due diligence," McCabe told the board. "If that due diligence indicates development, they will be successful. Listening to his enthusiasm and the methodology by which he would undertake that due diligence, and the steps that would be involved, and the fact that he comes personally with a resume that's second to none in this area, knowing that he has all the backing of Walton Arts Center and their connections to the Waltons, if he says this is a go, it's a go. If he says it's not a go, that's where the red flags come up.

Public commentary the board received was mixed. Those who spoke in opposition referenced parking and traffic and questioned the viability of an amphitheater, asking if it's the highest and best use for the site. Some asked if the city was getting the best price, given the rise in real estate values.

The appraisal firm the city contracted earlier this year valued the property at $2.25 million. Garland County's tax rolls listed its value at $1.62 million.

Those who spoke in support said an amphitheater would give residents and visitors more entertainment options. R.A. Wilson President/CEO Rick Wilson told the board The Majestic would add to the city's tourism portfolio, explaining that businesses, including The Legendary Vapors at 315 Park Ave., orbiting the amphitheater would benefit.

The board previous to the one seated at the first of the year expressed concern about selling the property, saying the city would lose control over the redevelopment if the city didn't retain title to the land. RFPs it authorized called for a long-term lease, which Wilson and other developers have said is unworkable.

Properties have to be under contract before lenders will finance projects, they said, noting that developers are reluctant to risk their capital on properties they don't own.

City Attorney Brian Albright said the contract the board approved Tuesday night allows the city to retain a measure of involvement. It stipulates an outdoor entertainment venue will be built on the site, and that the sale can't close until the city receives a memorandum of agreement between R.A. Wilson and the venue operator.

"The intention of that language is so that the city approves who the operator will be prior to closing," Albright told the board. "We understand given the complexities of things that they don't have one secured yet, but we would expect them to have that secured prior to closing."

Wilson told the board those provisions aren't customary, but he accepted them nonetheless.

"We quickly agreed with Mr. Albright to provide the memorandum of agreement," he told the board. "We think that's a good thing. The city wants to be involved in the knowledge and distinction of this operator. Albeit very unusual that you'll see a private sector business and a public entity agree on sharing that sort of information, we were quick to agree to it. We'll be as transparent as the private sector can possibly be."

The city received a $2.17 million offer on the eve of Tuesday night's vote from VIPA Hospitality Management, the owner/developer of more than half a dozen area hotels. Albright told the board it wasn't legally obliged to consider the offer, one the city said came at the "eleventh-hour."

"From my seat, and I don't vote, it's not about what's fair," Albright said. "It's about what's legal and what your rights are. You have the ability to do just about anything at this stage."

Burrough told the board offers referenced in emails he received from Dr. Vijay Patel, VIPA's chairman of the board and president, in 2019 and 2020 weren't formal offers, and that they were contingent on the city issuing debt to help finance the Falling Water Resort at The Majestic concept VIPA proposed during public planning sessions the city held more than two years ago.

He noted that the real estate purchase agreement delivered to City Hall Monday included language allowing VIPA to transfer the contract to a third party.

"It was a purchase agreement for Vijay Patel and Parth Patel or their assignee," he told the board. "There's a lot of work that would need to be done before I would feel comfortable bringing that offer to the board."

Wilson said after Tuesday's vote that his team would meet Wednesday at 6 a.m. to commence due diligence. He told the board he expects to have an operating agreement with WAC within a few months. He expects The Majestic to welcome its first patrons by spring 2023.

"See you at The Majestic," Wilson said after Tuesday night's vote.

An architectural rendering of the proposed Majestic Entertainment Pavilion, with amenities labeled. The image is courtesy of R.A. Wilson Enterprises Inc. - Submitted photo