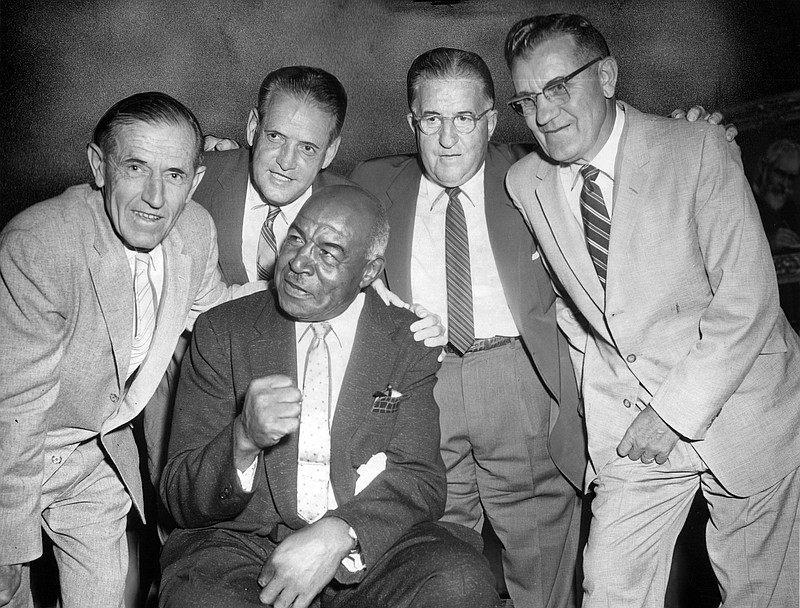 Judge Fred W. "Duke" Slater, seated, of University of Iowa's undefeated football team of 1921, huddles with former teammates at a luncheon honoring him on Aug, 13, 1958, at the Sherman Hotel in Chicago. Other players are, from left, Aubrey Devine, Les Belding, Bill Kelly and Glen Devine. - Photo by Chicago Tribune via The Associated Press

Duke Slater was so good the NFL couldn't keep him out.

For a Black player in the 1920s and '30s, that was a remarkable achievement.

And now Slater is going into the Pro Football Hall of Fame.

The pioneering two-way lineman was part of the centennial class announced in 2020 to celebrate the NFL's 100th season. He was recognized by the hall in April, and will be included in induction festivities Aug. 7-8 after they were postponed last year due to the pandemic.

Slater tackled bigotry head-on, and blocked it, too. He was the NFL's first African-American lineman, and often the only Black player on the field. After retiring, he broke down more racial barriers to become a Chicago judge.

An All-American at the University of Iowa, Slater created running room in the NFL for such stars as Ernie Nevers and Jim Thorpe, and was chosen All-Pro three times. George Halas called him the Rock of Gibraltar.

He was a 60-minute man and a model of durability despite being a target of rough play. The only game he missed in his 10 NFL seasons, against the Kansas City Blues, was due to a league agreement preventing Blacks from playing in Missouri.

After Slater retired, the league imposed a ban on Blacks that lasted until 1946. He died in 1966 at age 67, and the collective memory of his trailblazing career faded.

"Finally -- finally -- he's going into the Hall of Fame after all these years," said John Wooten, a Pro Bowl guard in the 1960s and an activist for racial equality. "You have to smile."

The Hall of Fame can be for the overlooked, as well as the famous. An AP story once listed Slater as a strong candidate for induction -- but that was in 1963.

"Why did it take so long, when he had such great qualifications?" former NFL coach Tony Dungy said. "It's obviously -- I don't want to say shameful, but here is a guy who was dominant. For people not to know, it's almost like we're hiding something, rather than talking about one of the great players in the '20s."

Slater's induction offers a chance to revisit his story.

The son of a minister, he went to high school in Clinton, Iowa, where he honed his muscles cutting ice on the Mississippi River in the winter. He staged a hunger strike to coax permission from his reluctant father to play football.

With money tight, Slater had to choose in high school between buying shoes or a helmet, and was still playing without a helmet as a college senior. The shoes weren't easy to obtain, either: The 6-foot-1, 215-pound Slater wore size 14½ FF.

He played four years at Iowa and helped the 1921 Hawkeyes finish 7-0, including a victory over the Notre Dame Fighting Irish and coach Knute Rockne that ended their 20-game winning streak. He entered the College Football Hall of Fame in 1951.

Slater made his NFL debut in 1922 with the Rock Island Independents and played with them until 1925, then spent his final five seasons the Chicago Cardinals.

He played all 60 minutes in the Cardinals' annual Thanksgiving Day game against the Bears in 1929, when his blocking helped Nevers score 40 points, a record that still stands.

Slater excelled in an environment where he wasn't really welcome, Wooten said.

"He had that attitude: 'You're not going to keep me from playing the game,'" Wooten said.

"The Blacks that played in yesteryear and what they had to go through, that era was very difficult. The blatant racism that existed then -- it was so segregated, they had to dress in their cars. There was the name calling; you couldn't eat or stay with the team. It was a horrible time. It's horrible now, but nothing like what those guys went through."

At times, Slater was the league's lone Black player.

"Somebody that dominant, you would think it would have paved the way for other African-Americans," Dungy said. "But it didn't. That tells you what it was like."

There was talk among NFL owners in the 1920s of a color ban similar to baseball, and they finally adopted one in 1934. Slater had retired, but he fought the ban by coaching barnstorming Black teams for several seasons.

Although Slater had no children, his niece, Sandy Wilkens, and other family members plan to attend the induction ceremony.

Wilkens was born in 1939, the year before Slater quit coaching. She knew her uncle as an attorney and a judge rather than as an athlete.

"He was so humble. I had no idea what he had done in football," she said. "But I was so impressed with the way he handled segregation during his lifetime. It didn't appear he got angry. Our parents didn't talk much about it, because those times were hurtful."

Slater graduated from Iowa's law school while still in the NFL. He worked as a prosecutor and in the Illinois commerce department, and was elected as a judge.

In 1960, Slater became the first Black judge to serve on the Superior Court of Chicago.

"He was groundbreaking," Dungy said, "in a lot of ways." 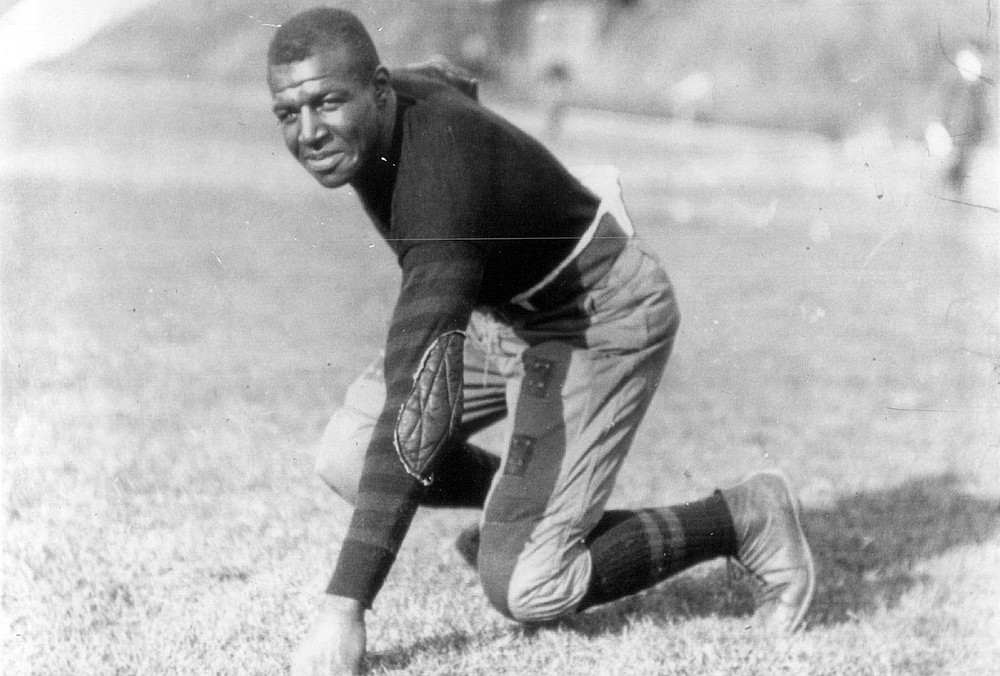 Iowa football player Frederick "Duke" Slater poses for a photo in 1921 Slater was the NFL’s first African-American lineman, and often the only Black player on the field. After retiring, he broke down more racial barriers to become a judge in Chicago. (Chicago Sun-Times via AP) 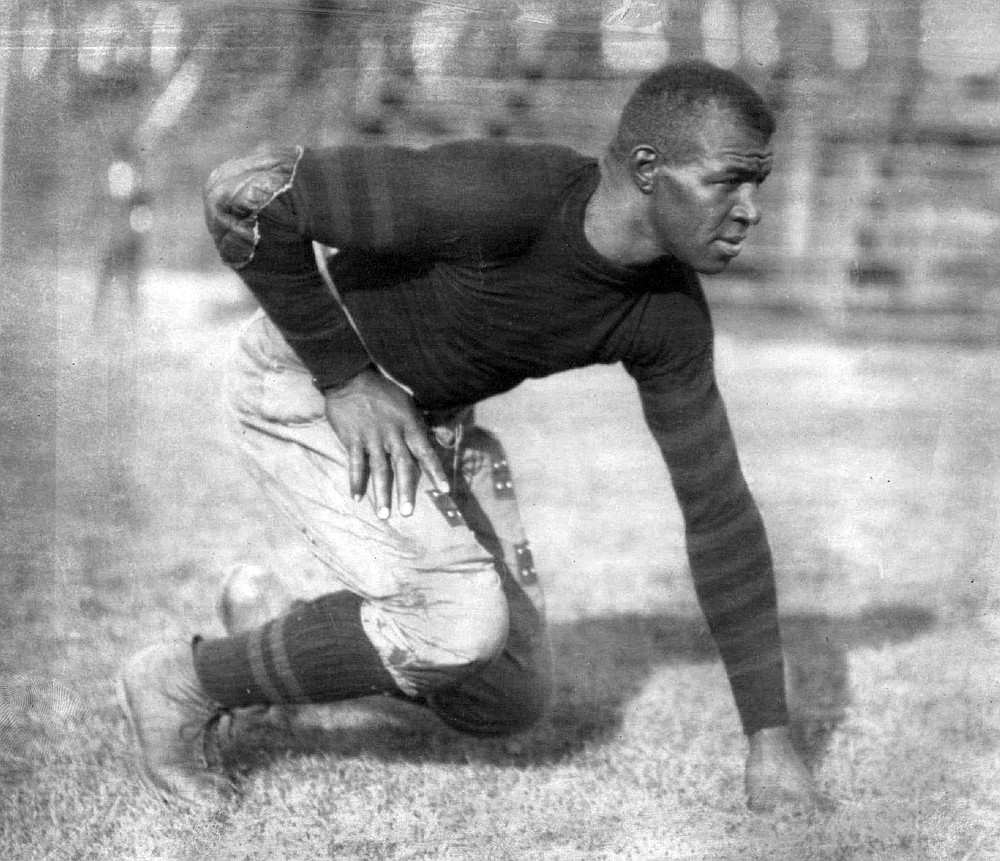 Frederic "Duke" Slater poses for a photo in 1921 when he was a tackle on the University of Iowa football team. Slater was the NFL’s first African-American lineman, and often the only Black player on the field. After retiring, he broke down more racial barriers to become a judge in Chicago. (Chicago Sun-Times via AP) 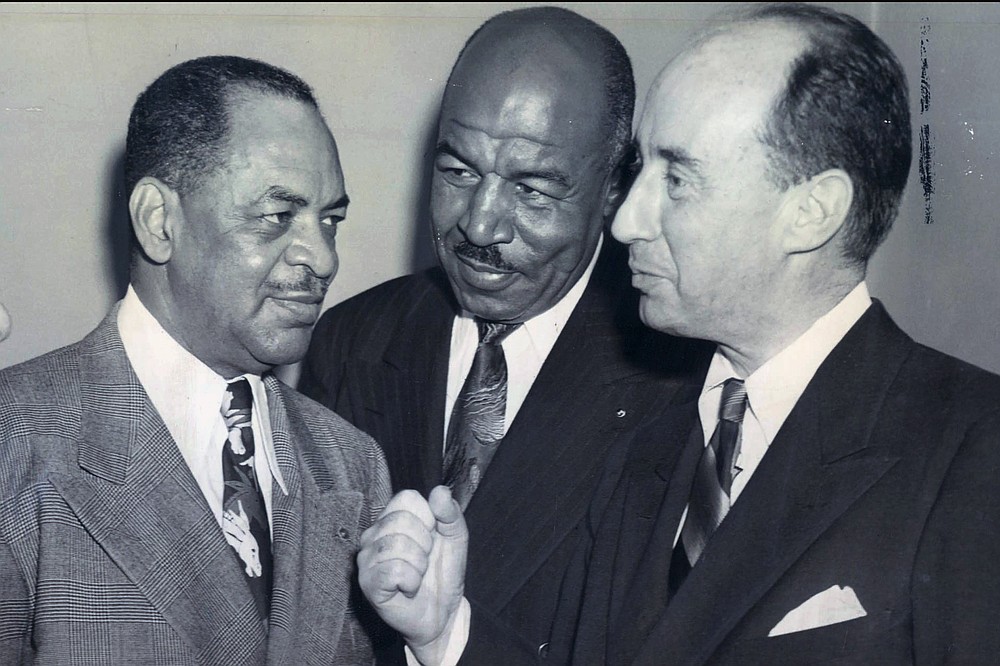 From left, Rep. William Dawson, Cook County Municipal Court judge candidate Frederick "Duke" Slater and Adlai Stevenson, candidate for governor, are shown in this Oct. 31, 1948, photo. Slater was the NFL’s first African-American lineman, and often the only Black player on the field. After retiring, he broke down more racial barriers to become a judge in Chicago. (Chicago Sun-Times via AP)