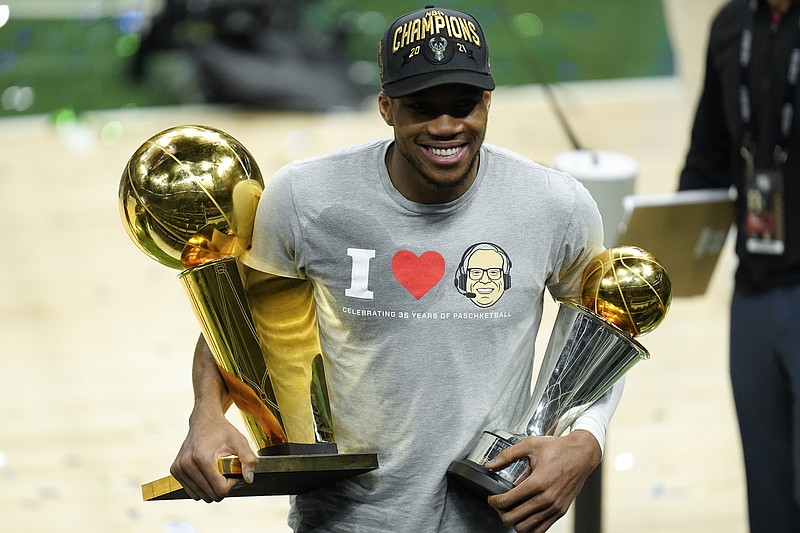 Milwaukee Bucks forward Giannis Antetokounmpo smiles while holding the NBA Championship trophy, left, and Most Valuable Player trophy after defeating the Phoenix Suns Tuesday in Game 6 of the NBA Finals in Milwaukee. The Bucks won 105-98. - Photo by Paul Sancya of The Associated Press

MILWAUKEE -- This could have been the offseason in which Giannis Antetokounmpo entered the free-agent market and perhaps teamed up with another superstar to try winning multiple NBA titles together.

Antetokounmpo instead will spend the summer celebrating a championship he won with the team that picked him.

Leading the Bucks to their first NBA crown in half century rewarded Antetokounmpo for his December decision to sign a supermax extension with Milwaukee. Antetokounmpo averaged 35.2 points, 13.2 rebounds and 5 assists to help the Bucks beat the Phoenix Suns 4-2 in the NBA Finals.

"I could go to a superteam and just do my part and win a championship,'' Antetokounmpo said Tuesday as he was flanked by the Larry O'Brien trophy and his NBA Finals MVP trophy. "But this is the hard way to do it and this is the way to do it. And we did it."

Antetokounmpo, 26, stuck with the franchise that had taken a chance on him eight years ago by selecting him with the 15th overall pick in the draft. He was just 18 then.

Loyalty matters to Antetokounmpo, who grew up dealing with poverty in Greece.

He spent much of his postgame news conference thanking the people who helped get him to this point. He praised the current and former Bucks officials who assisted in his development. He wore a T-shirt honoring Jim Paschke, who retired this year after broadcasting Bucks games for 35 seasons.

Most of all, he spoke about his family while crediting his Nigerian parents for the sacrifices they made along the way. Three of their sons have now won NBA championships, though Giannis is the unquestioned star of that group.

"I can be stubborn sometimes," Antetokounmpo said. "I can disconnect myself from the world because I want this so bad. I wanted this so bad, and I was able to get it. That's why I was tearing up. But people helped me to be in this position. I didn't do it by myself. Every freaking day, people helped me."

He also thanked the city that has become his basketball home.

Antetokounmpo averaged 6.8 points his rookie year as Milwaukee staggered through a 15-67 season, but he developed into a two-time MVP while helping the Bucks emerge as annual contenders.

A surprising second-round loss to Miami in the playoff bubble last year could have caused Antetokounmpo to start planning his exit from Milwaukee. Antetokounmpo instead doubled down by signing that extension.

His love affair with the Milwaukee area was evident Wednesday morning as he went on Instagram Live and ordered 50 chicken nuggets at a local Chick-fil-A drive-through with his trophies in his car. When fans started approaching his vehicle, Antetokounmpo chatted with them and let them take pictures.

The Bucks didn't have the smooth regular season they'd enjoyed the last couple of years.

Jrue Holiday, the team's top offseason addition, missed 10 games due to COVID-19. After entering the playoffs as the NBA's top overall seed in 2019 and 2020, the Bucks posted the seventh-best record in the league and had the East's No. 3 seed this year.

But that regular-season adversity gave the Bucks the toughness they'd need in the postseason.

"We knew it wasn't always going to be pretty," Bucks forward Khris Middleton said. "We knew we were going to have to win different styles of ballgames, but that's the type of team you want to be, to throw different guys out there, different lineups out there, because you can't win the same way at this level."

Like many champions, the Bucks got some good luck along the way.

James Harden missed nearly all of the first three games and Kyrie Irving sat out the last three games of Brooklyn's second-round series loss to Milwaukee. The Bucks won Game 7 in overtime after Kevin Durant's foot was on the line as he hit a jumper at the end of the fourth quarter, turning his potential series-clinching 3-pointer into a two-point basket.

But the Bucks also showed their mettle by erasing 2-0 deficits against Brooklyn and Phoenix. Antetokounmpo delivered his dominant performance in the finals while playing with on a left knee he had hyperextended just a few weeks ago. The Bucks were 10-1 at home in the playoffs.

Middleton played a major role in this title chase. He made the winning basket in the final minute of overtime in that Game 7 victory at Brooklyn. He had a 20-point fourth quarter in Game 3 and a 23-point third quarter in Game 6 of the Eastern Conference finals with the Atlanta Hawks. He scored 40 points in Game 4 of the NBA Finals.

Antetokounmpo carried the Bucks across the finish line by scoring at least 40 points in three of the six NBA Finals games, including his 50-point, 14-rebound, 5-block effort in Tuesday's 105-98 series-clinching victory.

Throughout his NBA career, Antetokounmpo's had Middleton as a teammate. Now they've won a title together.

It turns out Antetokounmpo didn't have to leave Milwaukee to find his championship running mate.

"We have to live in the moment, enjoy this moment," Antetokounmpo said. "I hope Khris enjoys it with his family. And he played amazing throughout the whole playoffs, man. He led us when I was down. He gave me a chance to come back.

"But once we're done enjoying this, we got to get back to work. We've got to do it again. That's how me and Khris operate." 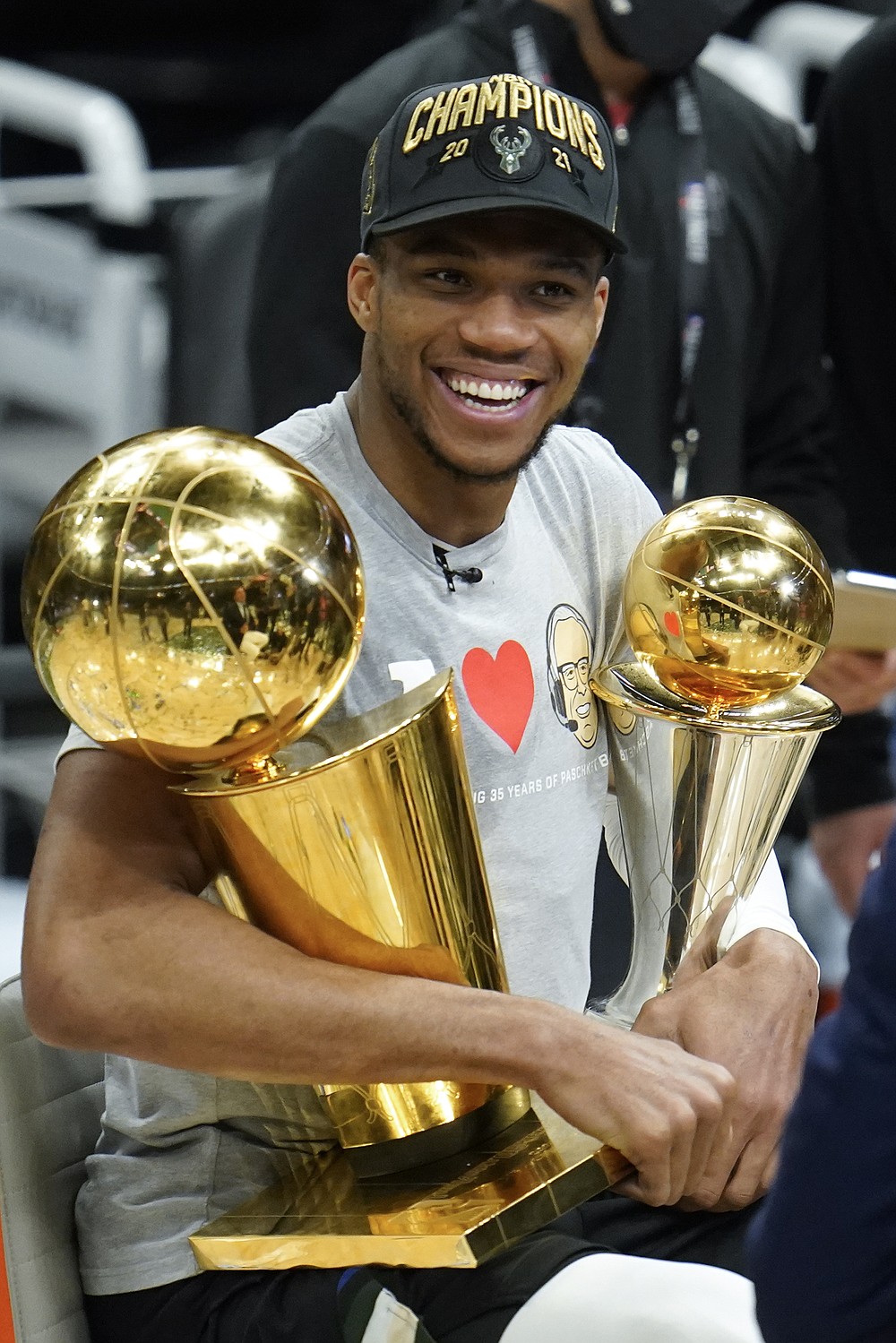 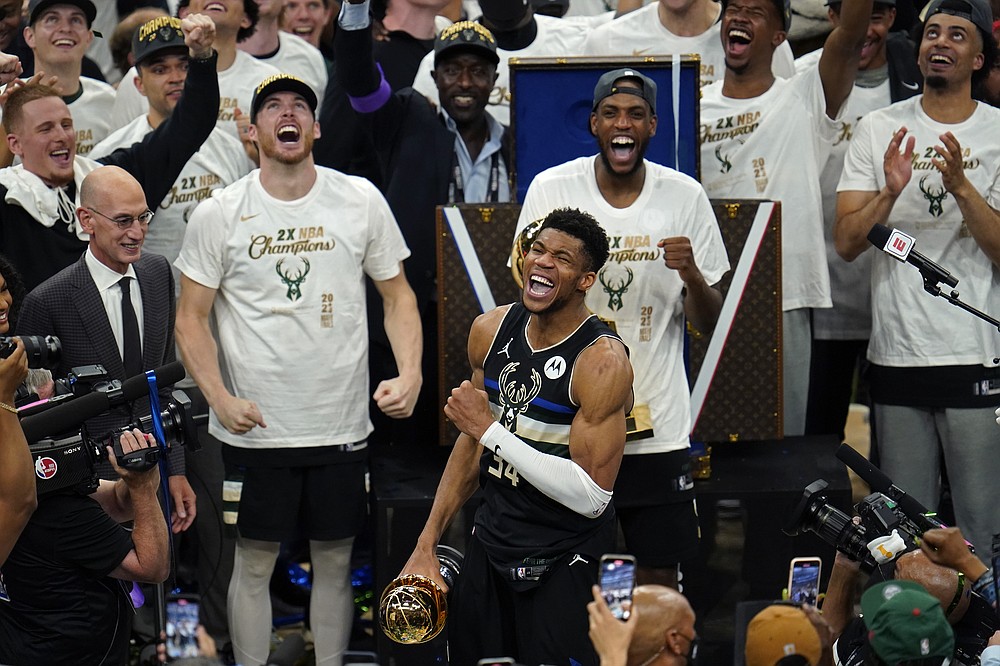 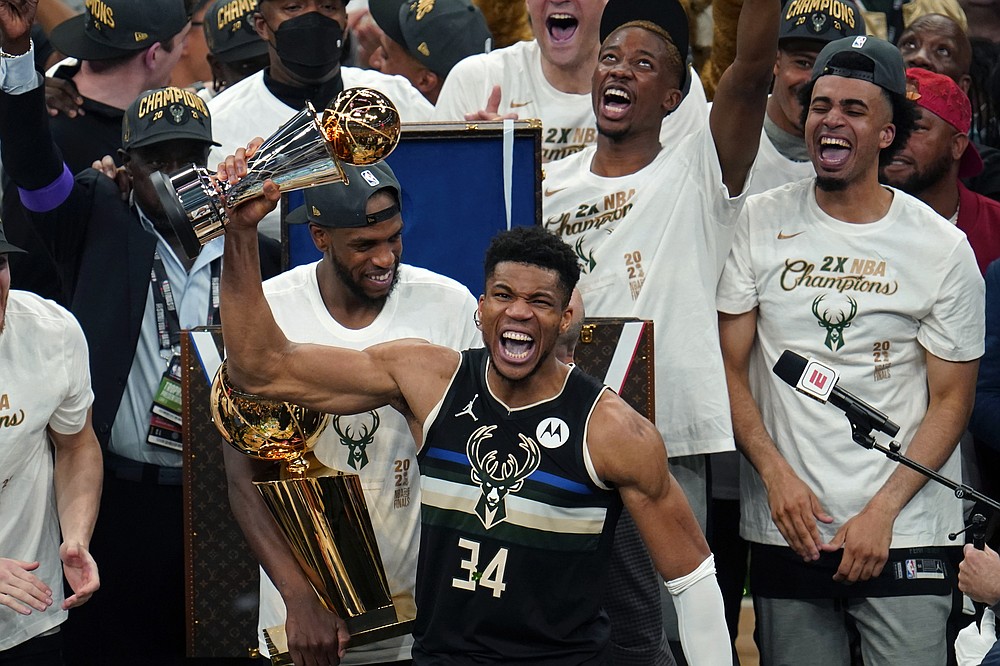 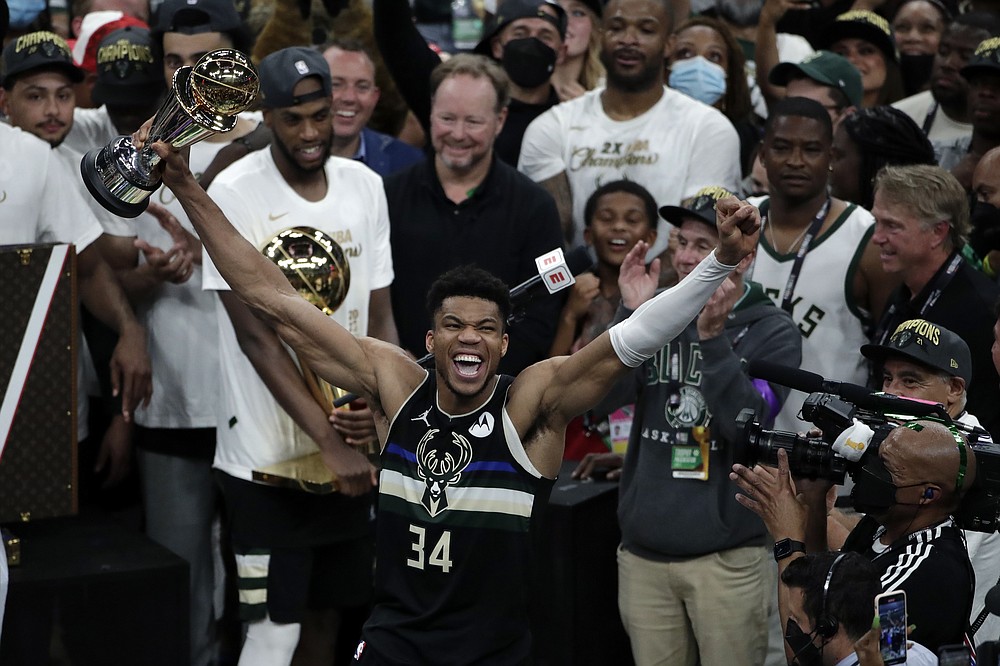