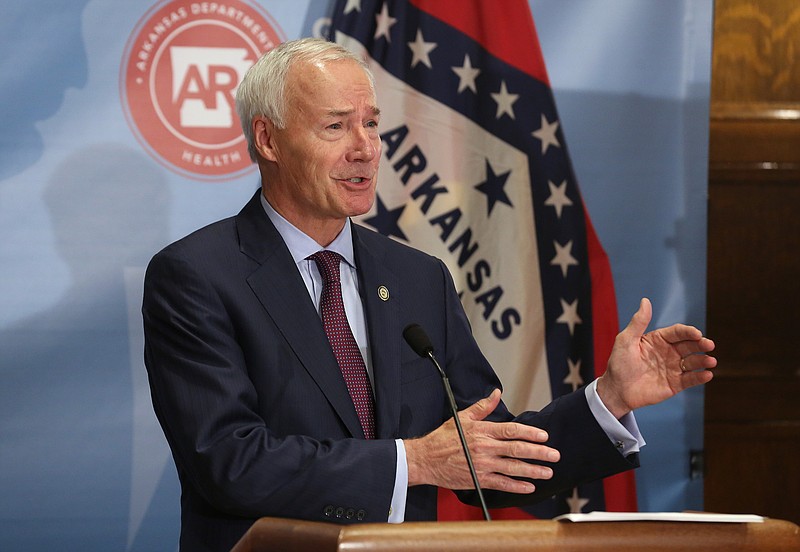 Gov. Asa Hutchinson answers questions about the special session being called, likely next week, during a press conference on Thursday, July 29, 2021, at the state Capitol in Little Rock. .(Arkansas Democrat-Gazette/Thomas Metthe)

LITTLE ROCK -- Arkansas' Republican governor said Thursday that he will call lawmakers back to the Capitol to consider lifting the state's ban on mask requirements in public schools as the state's coronavirus cases continue surging weeks before students return to classes.

"This is not a debate about mask mandates for those that can make their own decisions and have the means to get vaccinated," Hutchinson said a news conference at the state Capitol. "This is a discussion about the school environment where schools can make decisions about the public health for their school environment and the children they have responsibility to protect."

Hutchinson also reinstated an emergency declaration because of COVID-19, two months after he lifted the declaration he issued early on in the pandemic last year.

Arkansas' coronavirus cases have skyrocketed in recent weeks, fueled by the delta variant of the virus and the state's low vaccination rate. The state reported more than 2,800 new virus cases on Thursday. The state ranks second in the country for new virus cases per capita, according to Johns Hopkins University researchers.

Only 36% of the state's population is fully vaccinated against COVID-19.

Hutchinson and legislative leaders have faced growing calls to revisit the ban, at least for public schools. Hutchinson said he's proposing keeping the rest of the mask mandate ban in place and did not plan to call for another state mask requirement.

The proposal by Hutchinson, who also chairs the National Governors Association, comes as other Republican figures are criticizing calls for more widespread use of masks in schools.

"It's not healthy for these students to be sitting there all day, 6-year-old kids in kindergarten covered in masks," Florida Gov. Ron DeSantis told a gathering of the American Legislative Exchange Council on Wednesday. There is no evidence that wearing masks is harmful to children older than toddler age.

DeSantis did acknowledge that some school districts and parents have taken a different approach in his state on mask-wearing, and said he was OK with that.

Former President Donald Trump lashed out at revised Centers for Disease Control and Prevention guidelines recommending everyone at schools wear masks indoors, declaring: "We won't go back. We won't mask our children."

Republican governors in other states with mask mandate bans like Arkansas' said they're not seeking a similar rollback. Utah Gov. Spencer Cox said he'll instead push for a program to make N-95 masks available to any student who wants one.

Hutchinson said he expected that many school districts in Arkansas would not require masks, but most he's talked to want the authority to make that decision.

Hutchinson said legislative leaders have told him allowing schools to require masks would be a "heavy lift."

The proposal will need at least two-thirds support in both chambers of the Legislature for it to take effect before school begins next month. If it passes by a smaller margin, the change wouldn't take effect until 90 days after the Legislature adjourns.

"My issue is it's real close that we would even have the majority right now," Senate President Jimmy Hickey, a Republican, said. Hickey, who voted against the ban, said he personally supports lifting it for schools.

The lawmaker who sponsored the measure banning mask mandates said he was disappointed with the governor's decision.

"This is about a parent's decision about what is best for their family, not any government entity to have that big government mandate," Republican Sen. Trent Garner said.

The top Democrat in the Senate said he believed it would be close but that there would be "soul searching" among Republicans who backed the mandate ban.

One lawmaker who voted for the ban said he's changed his mind, as he's seen the delta variant take hold throughout the state.

"It's about local control," Republican Rep. Joe Jett said. "One situation doesn't fit everything across the state."

Hutchinson's renewed emergency proclamation for the pandemic will also have to be reviewed by the Legislature under a new law expanding lawmakers' ability to end a disaster declaration.

The governor said the declaration will allow Arkansas to request assistance from other states for its health care programs to ease licensing requirements for retired health care workers to re-enter the field.