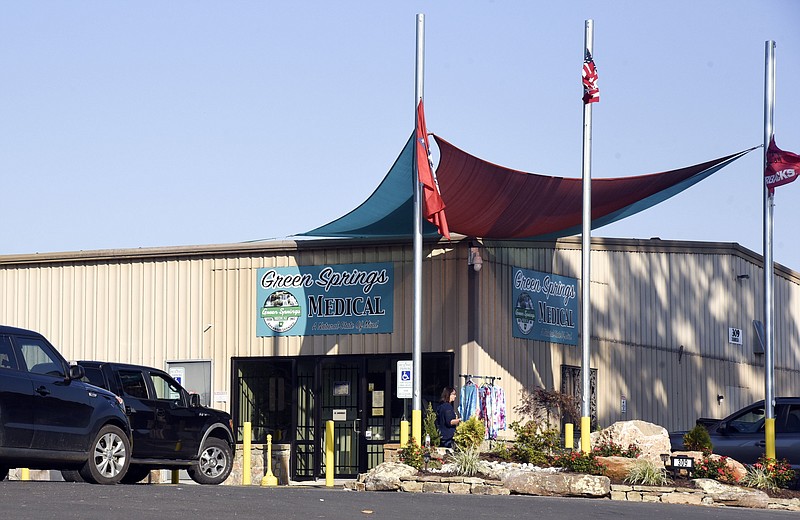 The Arkansas Court of Appeals has affirmed the injunction a circuit court judge imposed in November 2019 against the CEO of the only licensed medical marijuana dispensary in the city of Hot Springs.

The opinion, written by Judge Waymond M. Brown, the court issued Wednesday said Bruce Simpson's interest in Green Springs Medical would be irreparably harmed if CEO Dragan Vicentic were not enjoined from excluding Simpson from his share of the profits and in decisions on how the business is run.

Simpson is suing Vicentic in Garland County Circuit Court. The complaint he filed in September 2019 alleged Vicentic excluded him from profits, business decisions and access to business records despite the dispensary application filed with the state Medical Marijuana Commission in August 2017 listing Simpson as the security manager and vice chairman with a 40% stake in the business.

The higher court upheld Special Judge Ted Capeheart's injunction setting aside 50% of past and future profits for Simpson and establishing a set of protocols allowing him to participate in business decisions and to have access to business records without going onto the premises.

Capeheart's ruling didn't grant Simpson physical access to the Seneca Street dispensary for fear it would spark an altercation. Simpson was granted access to bank statements, sales and payroll reports, purchase orders, invoices and other business records through an intermediary, as allowing Simpson on the property could lead to a "fistfight," Capeheart told the litigants during an October 2019 hearing.

The 173-page redacted transcript of the hearing The Sentinel-Record obtained recounted the acrimony that festered between the partners as Green Springs became one of Arkansas' first legal purveyors of a federally illicit drug.

The newspaper requested a copy of the transcript almost two weeks before Vicentic's attorney filed a motion to seal. Capeheart's amended order unsealed most of the transcript, but information presented at subsequent hearings has mostly been shielded from public view.

Capeheart sealed testimony and evidence presented at an April 22 motion hearing. His order said confidential information was presented that should not be publicly disclosed, and that Vicentic's attorney requested that the courtroom be closed to the public.

Vicentic testified in October 2019 that Simpson's interest in Green Springs ended in early June of that year. He told the court he didn't have anything in writing that dissolved Simpson's interest, explaining that he and Simpson verbally agreed that the latter would no longer be a member of the corporation. Simpson testified that he never surrendered his interest, telling the court he declined Vicentic's $100,000 offer to buy him out.

Capeheart ruled the operating agreement Vicentic said gave him ultimate control of the business was invalid, because only Vicentic had signed it. Vicentic testified that there was only room for one signature on the agreement. The judge said in the absence of a valid operating agreement, the 1993 law governing the formation and operation of limited liability companies entitled Simpson to a 50% interest.

The Court of Appeals agreed.

"(Vicentic) signed the operating agreement as managing member, but (Simpson) was never presented with the agreement and never had an opportunity to sign the agreement," Brown wrote in the opinion the Court of Appeals issued Wednesday. "It is undisputed that when Green Springs was formed, (Vicentic) had a 60% ownership interest and (Simpson) had a 40% interest.

Simpson surmised in testimony he gave during the October 2019 hearing that the dispensary generated monthly profits of $300,000 to $400,000. Green Springs was one of a few dispensaries operating at that time. Its market share has contracted as more dispensaries have opened and surpassed it in sales.

Vicentic filed a lawsuit in January alleging that the dispensary's shrinking market share is the result of three cultivators refusing to sell him product, which the complaint said violates federal antitrust laws. Vicentic told the newspaper Bold Team, Osage Creek and Delta Medical "blackballed" him after he told the Medical Marijuana Commission last June that the growers couldn't keep up with demand.

He urged commissioners to issue the remaining cultivation licenses allowed by the state constitutional amendment that legalized marijuana for medicinal purposes, provoking reprisals from the growers, he said. In addition to the three growers, the lawsuit named the Medical Marijuana Commission, Alcoholic Beverage Control and the Department of Finance and Administration as defendants.

Vicentic is seeking an injunction directing the commission to promulgate rules prohibiting growers from refusing to sell to dispensaries and damages from the three growers. The lawsuit was transferred from Garland County Circuit Court to Pulaski County Circuit Court earlier this year.

In granting Simpson's injunction request, Capeheart cited Vicentic's attempt to remove Simpson from the company without his consent. DFA confirmed Vicentic contacted it regarding a change of ownership request. ABC Director Doralee Chandler told him in an August 2019 email that he needed Simpson's consent to change the ownership structure. DFA said Vicentic subsequently withdrew his request.

"(The lower court) expressed concerns over (Vicentic) going behind (Simpson's) back to try to remove (Simpson's) name as an owner," Brown wrote in the opinion the court issued earlier this week. "The harm (Simpson) faced if the injunction was not granted could not necessarily be compensated by money damages or redressed in a court of law. Accordingly, we hold that the circuit court did not abuse its discretion in finding that (Simpson) would suffer irreparable harm if the injunction was not issued."

Last month, the Medical Marijuana Commission renewed Green Springs' permit for the fiscal year that starts July 1. At presstime, Vicentic hadn't responded to an email requesting comment on the Court of Appeals ruling.