'For the culture': The moment arrives for 'In the Heights' 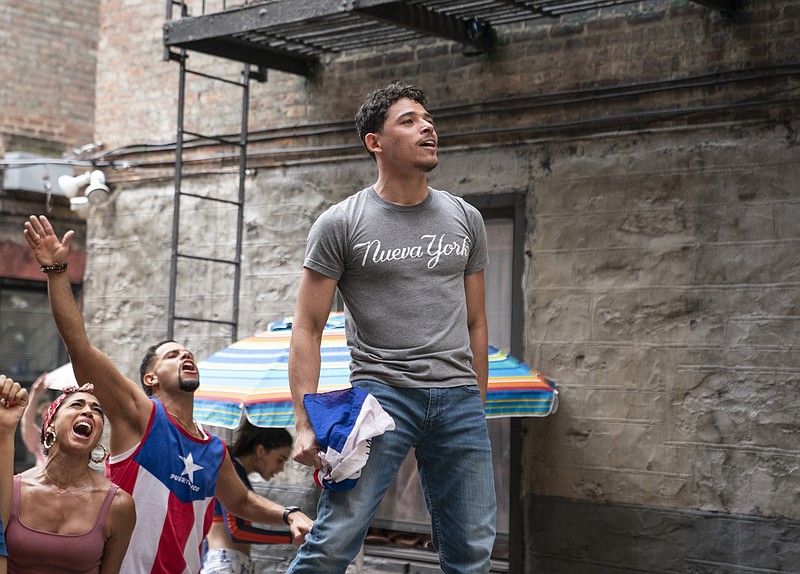 NEW YORK -- As a student as Wesleyan, Lin-Manuel Miranda began writing what would become "In the Heights," the musical that would launch him as a playwright and performer and that would lead, two decades later, to Jon M. Chu's upcoming lavish big-screen adaptation. He was motivated, like any confident young artist, by ambition. But also by something else.

"It was a lot of fear, honestly," Miranda said in a recent interview. "I had a real wake-up call when I was 18, 19 and starting to study theater. The fear was: I'm going into a field that has no space for me, that has no roles for me. It was sort of that thing of: No one's going to write your dream show. The cavalry isn't coming."

When "In the Heights" opens Friday, it may feel very much like reinforcements are arriving. The movie, a street-level song-and-dance spectacle to rival the MGM musicals of old, is an exuberant celebration of the Latino immigrant experience, of a diverse neighborhood, of a teeming summertime New York, of life.

"In the Heights," originally slated to be released last June, arrives already engulfed with the aura of cultural event for one of the movies' most blatantly underseen communities. And as a big-screen party, "In the Heights" is poised to rekindle the euphoric, dancing-the-aisles theatrical experience that's been all but snuffed out over the past year. Just how much can "In the Heights" lift up? "It's a lot," Miranda sighs, "to put on a musical."

Yet the timing, despite Miranda's early inclination to get the movie out by streaming last year, seems preordained. "In the Heights" is one massive reminder of what we've been missing, on screen and off, the past pandemic year. Chu calls it "a vaccine of joy."

"On the first day of shooting, we all got in a circle and I was like: Let go of all the pressure. Let's just entertain the hell out of these people," recalls Chu, the director of two "Step Up" movies and "Crazy Rich Asians."

"We filmed it in the best summer of our lives in 2019," says Miranda. "It shows just how wonderful it is when we all get together and sing a song, or to see us embracing our elders without fear. It all hits different now."

"In the Heights" has already been almost universally praised by critics. With city-wide screenings, it will open the Tribeca Film Festival on Wednesday. But as much as "In the Heights" feels like a sure-thing blockbuster and a Latino milestone, the movie will be debuting in theaters that have been battered by the pandemic. The film's long road to the screen -- plans only picked up once Miranda's "Hamilton" became a Broadway sensation -- is leading to a crucial test for moviegoing. Another wrinkle: Warner Bros. is also releasing it simultaneously on HBO Max.

The filmmakers hope "In the Heights" can be for Latinos what "Black Panther" was for Black Americans or what Chu's own "Crazy Rich Asians" was for Asian Americans. Hispanics, the largest minority in the United States, make up an even larger slice of moviegoers despite their regular absence from Hollywood's biggest productions. For Chu, the kind of industry-changing, pop culture sensation he experienced with "Crazy Rich Asians" ultimately hinges on the audience.

"Even 'Crazy Rich Asians' you couldn't really tell. It was only the second weekend when people started coming back and the third weekend when people who didn't go to the movies started to come," says the director. "Buying tickets to this thing --putting your money where your mouth is -- was the democratic statement that no studio could make up."

Vacillating between wide-screen seas of dancers and intimate portraits of immigrant life, "In the Heights" tells a story both specific and of a community. Playing the role originated by Miranda, Anthony Ramos stars as Usnavi, a Dominican-American bodega owner with dreams of returning to the Caribbean. Ramos played Usnavi in a regional production of "In the Heights" but his breakthrough came in "Hamilton," in dual roles as John Laurens and Philip Hamilton.

The lyrics and backdrop of "In the Heights" are especially meaningful to the Bushwick native Ramos, whose star-making performance brings a streetwise New York swagger and big-smiling charisma to the film.

"The story of all these characters feels so familiar to my life and to the people that are in my life who I've seen in my own community growing up in Bushwick in New York and Brooklyn," says Ramos. "There are shots of the food that I grew up eating, the music that I grew up listening to. The piragua guy, I know that guy."

A sense of responsibility weighed on Ramos during the filming in Washington Heights. Before shooting certain scenes that felt particularly powerful, Ramos would shout to the crew: "For the culture!" -- a ritual he learned from Spike Lee while acting in his "She's Gotta Have It."

"It meant that we are all here, in this moment, doing this film and telling this story for something that is way bigger than any us," says Ramos. "This ain't about us, this movie. It's about the people that came before us and the people that came after us. This is for everybody who had to sacrifice, who had to break doors open."

Both Ramos' mother and sister make cameos in the movie. In the opening number, his sister is dancing five people down from him. There are many such casting quirks. Miranda, happily a bit player in a world he created, plays the piragua guy. Much of the original Broadway cast appear in the final dance number among bursting hydrants. Some of the extras are kids from a nearby high school that put on their own "In the Heights" that the filmmakers attended and were inspired by.

"It just showed us: This is what we're here for," says Chu.

So strong is Chu's connection to the movie that he named his second child Jonathan Heights Chu. He wanted, he says, to hear that name every day of his life, and for his son to hear it, too.

Alongside Ramos stars Leslie Grace as Nina Rosario, a college student home for the summer; Corey Hawkins as Benny, a taxi driver; and Melissa Barrera as Vanessa, a salon worker trying to get her own apartment downtown. For Barrera, a 30-year-old Mexico-born actor, the character -- a striver seeking opportunity away from home -- is basically herself.

"To me 'It Won't Be Long Now' is literally the anthem of my life. I've been waiting for an opportunity like this forever. I feel like I've worked really hard in my career but there's always something, like, what is it that I'm missing?" says Barrera. "I was that girl. I left Mexico. I knew I wasn't going to be able to become a performer in my hometown."

This image released by Warner Bros. Pictures shows a scene from "In the Heights." (Warner Bros. via AP)

This image released by Warner Bros. Pictures shows Anthony Ramos in a scene from "In the Heights." (Warner Bros. via AP) 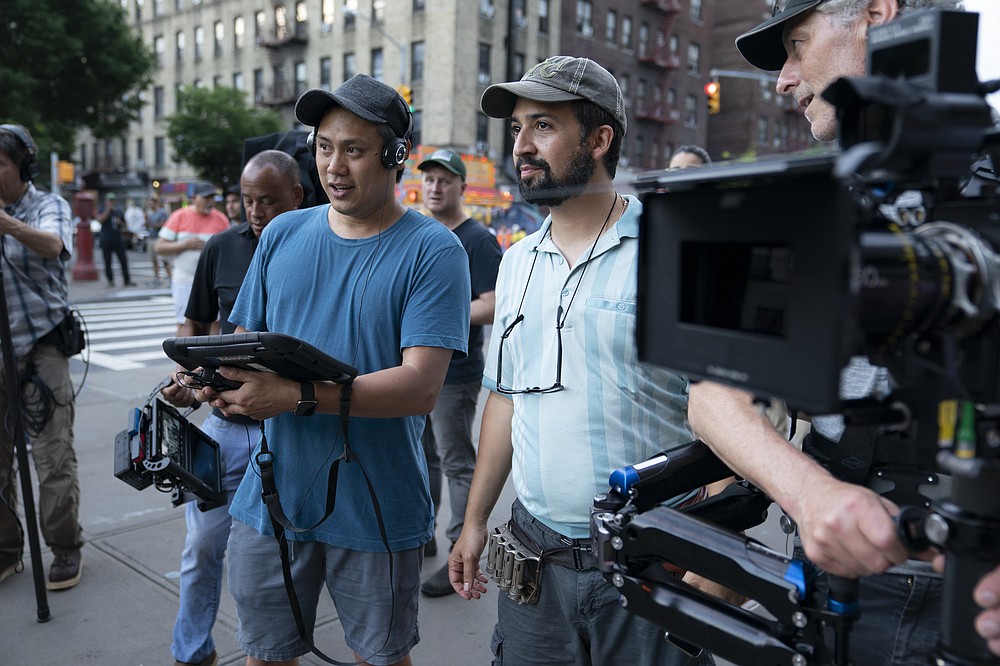 This image released by Warner Bros. Pictures shows director John Chu, left, and Lin-Manuel Miranda on the set of "In the Heights." (Macall Polay/Warner Bros. via AP)

This image released by Warner Bros. Pictures shows a scene from "In the Heights." (Warner Bros. via AP) 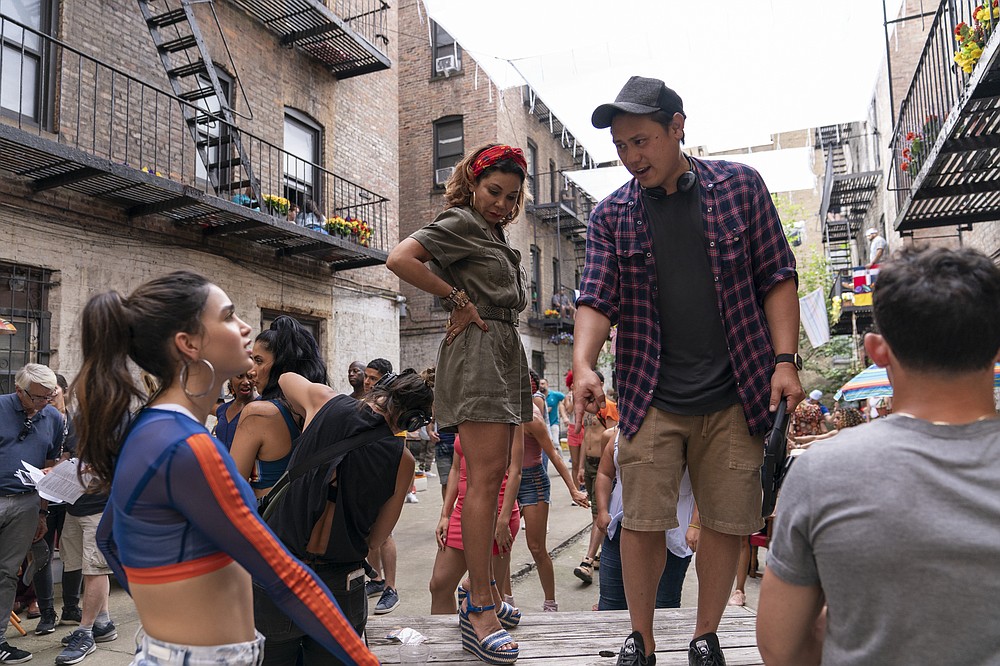 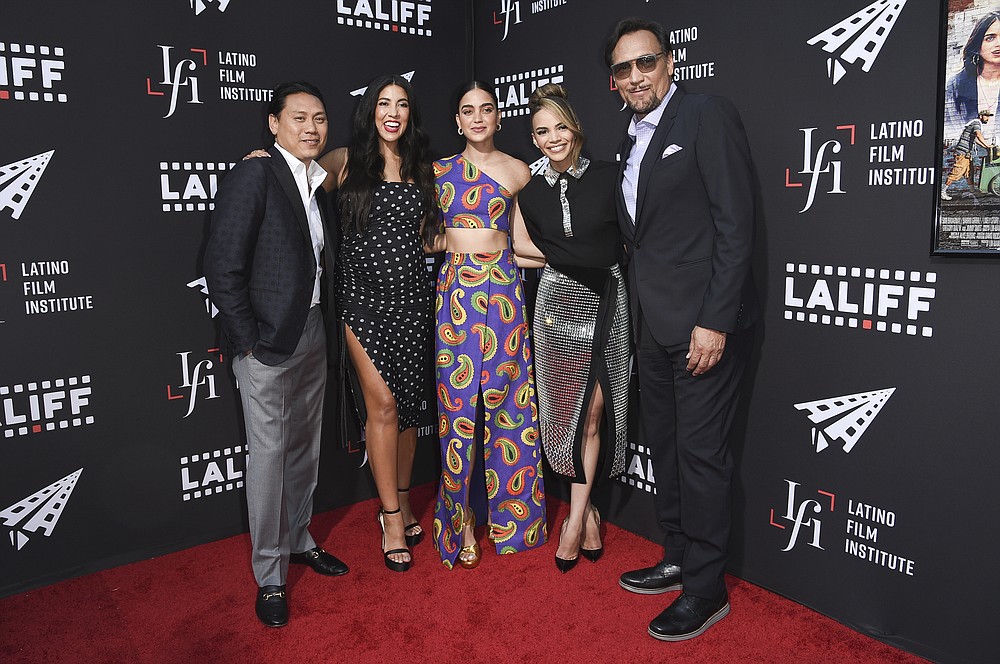 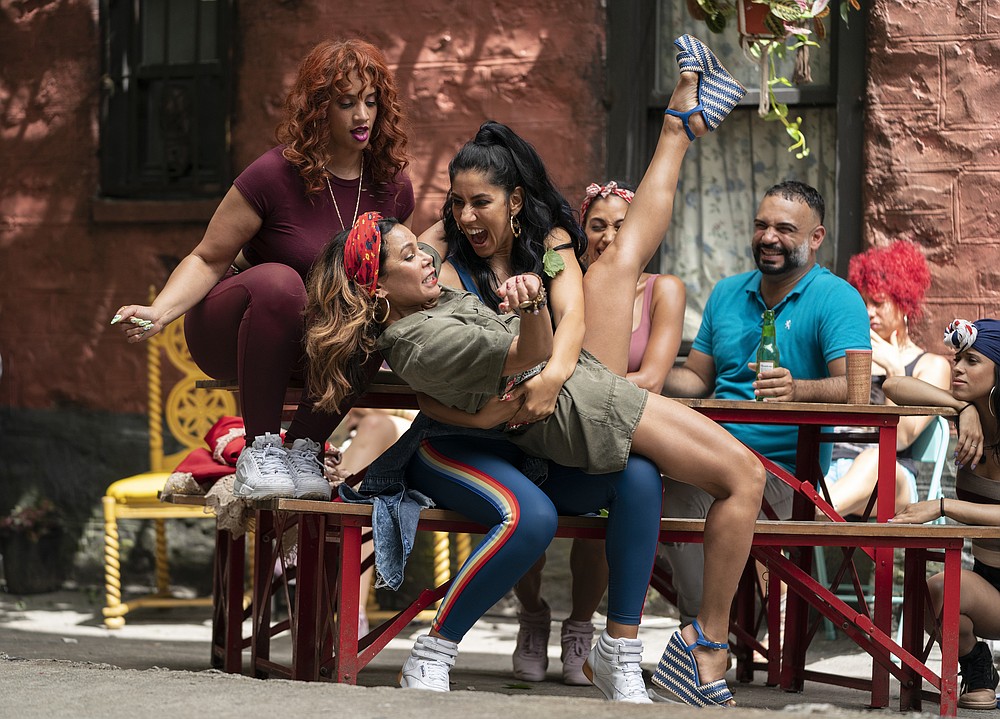 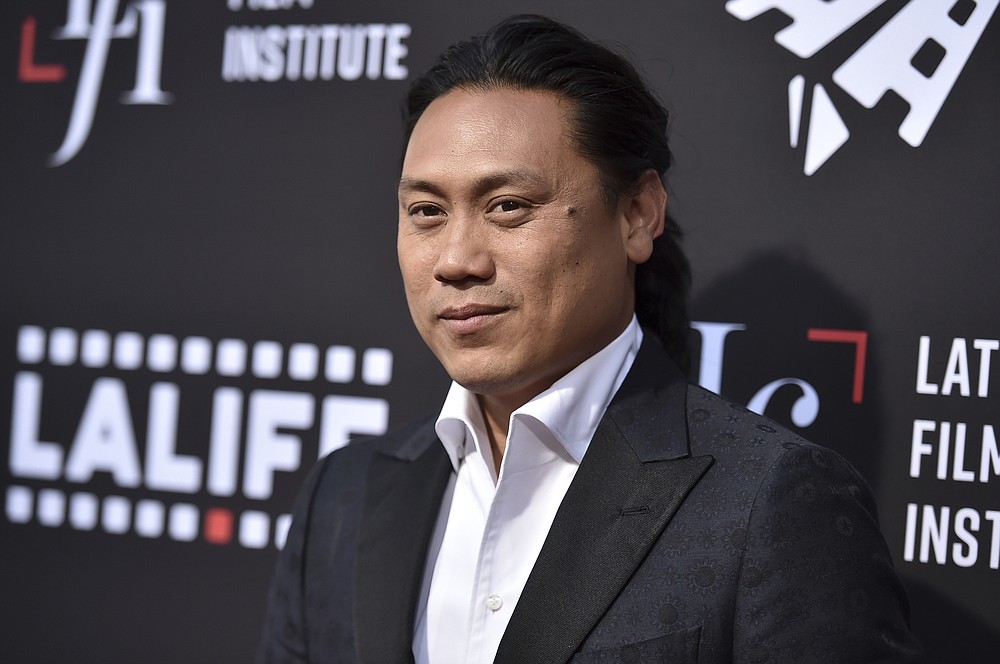 Jon M. Chu arrives at a screening of "In the Heights" during the Los Angeles Latino International Film Festival at TCL Chinese Theatre on Friday, June 4, 2021, in Los Angeles. (Photo by Richard Shotwell/Invision/AP) 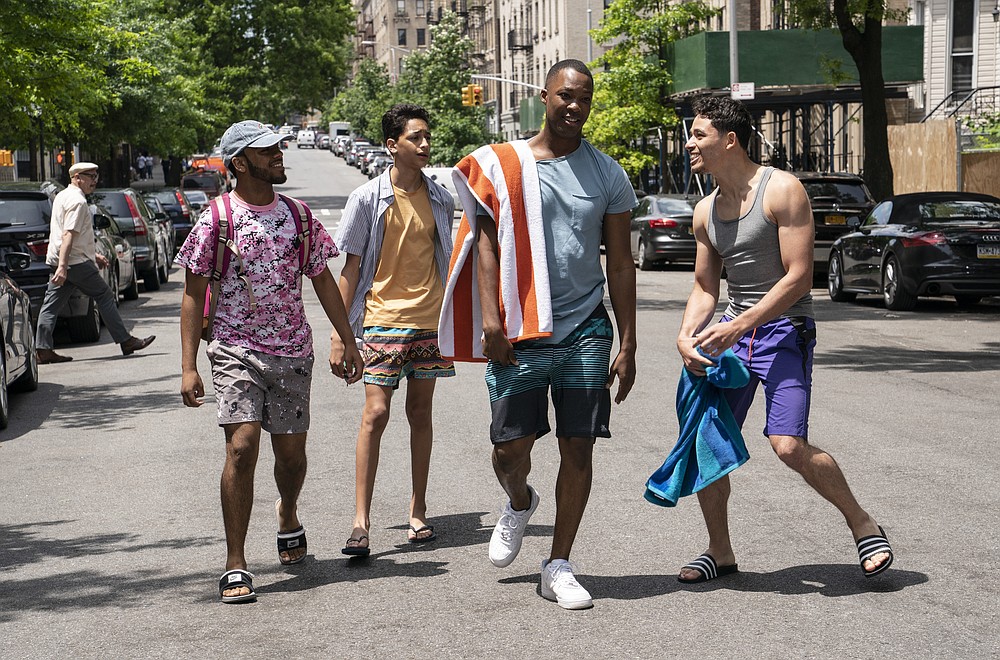