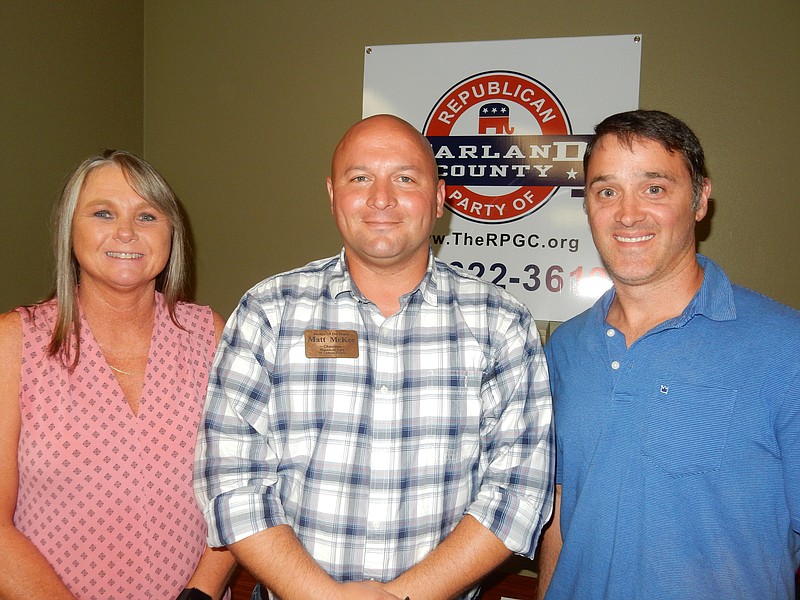 County committee membership of the Republican Party of Garland County has grown by greater than 10% during the past year, Matt McKee, RPGC chairman, said during the organization's recent monthly meeting.

"We are seeing more and more people wanting to get involved in the conservative movement," McKee told about 50 members and guests at last Thursday's meeting, according to a news release.

McKee noted that the RPGC has redesigned its website, developed outreach strategies to maintain members and attract new members and became a member of The Greater Hot Springs Chamber of Commerce. He said there are plans for more community outreach to attract more people to the party.

"Our success has been our message to the people. We want people to know what Republicans are really about," McKee said. "Many people have found a place where they can share their ideas with other people. We have also had a great variety of different speakers at our monthly meetings."

"My hopes are that our membership with be greater than 100 people by the end of 2021," McKee said.

Committee members are elected during the Republican Primary or by the RPGC County Committee between primaries. Anyone who wishes to become a member can visit http://www.TheRPGC.org or call Jim Keary, RPGC secretary, at 501-786-9206.

The RPGC meets on the first Thursday of every month at 6:30 p.m. at its headquarters at 615 W. Grand Ave., in Hot Springs.

During the June meeting, Mindy McAlindon and June Wood, candidates for the Republican Party of Arkansas national committeewoman, were the main speakers. McAlindon was elected to the position during the state RPA meeting on Saturday.

District 35 state Sen. Jason Rapert, said during the RPGC meeting he is seeking the position of Arkansas lieutenant governor in 2022. He said he has the greater experience to serve in that position since he has "been on the front lines of the Republican Revolution in Arkansas."