Alvarez tries to add an Olympic baseball medal to speedskating 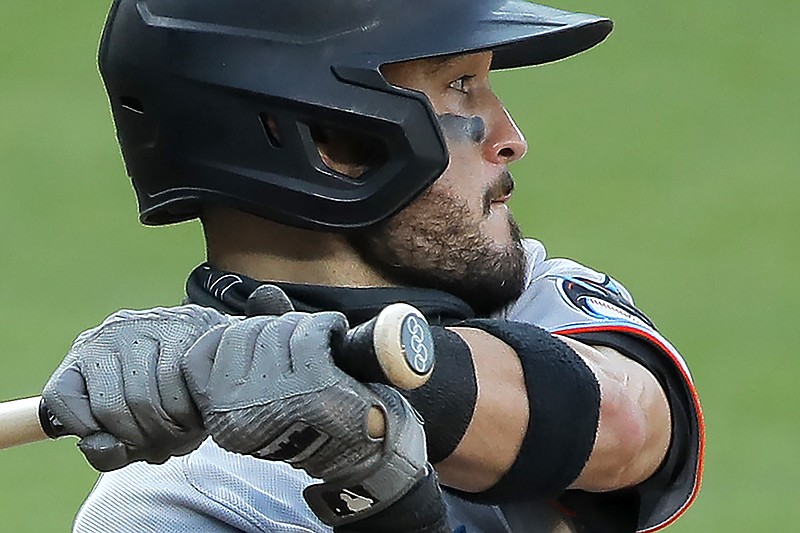 The Olympic rings are seen on the knob of Miami Marlins' Eddy Alvarez's bat as he swings at a pitch from the Baltimore Orioles during the seventh inning in the first game of a doubleheader in Baltimore, in this Aug. 5, 2020, file photo. Alvarez, having won a silver in speed skating at Sochi in 2014, helped the U.S. reach the Olympic baseball tournament and could become only the third American to win medals at the summer and winter Games. Photo by Julio Cortez via The Associated Press

Eddy Alvarez can display his medal, along with his mettle.

"This feels like a little bit of a redemption trip for me, because there's the feeling of listening to someone else's national anthem when you were so close to winning," he said. "At the end of the day, standing on the Olympic podium on the top is what we're all really searching for here."

Seven years ago, Alvarez was part of a four-man short track speedskating team that fell 0.271 seconds short of Russia in the 5,000 meter relay and won a silver medal at the Sochi Olympics. Last weekend, the 31-year-old Miami Marlins minor league infielder helped the U.S. qualify for the Olympic baseball tournament.

"I never thought it was going to be possible because baseball was taken out of the Olympics," he said. "It just so happened that the stars aligned."

While for most sports the Olympics is a matchup of its best players, in baseball it is merely the best of the rest -- as in, those not in the major leagues.

Alvarez made it to the major leagues last year with Miami following a coronavirus outbreak among the Marlins. He became the first non-baseball Olympian in the major leagues since Jim Thorpe with the New York Giants and Boston Braves from 1913-19, after he won gold medals in decathlon and modern pentathlon at the 1912 Stockholm Games.

Alvarez was batting .222 with one homer and five RBIs this season through May 23 at Triple-A Jacksonville before leaving for the Americas Olympic qualifying tournament. He appeared in 15 games with the Marlins during spring training.

"I think Eddy will get back to the big leagues. He's a kid that obviously has had to fight in his life for a lot of things and work hard," Marlins manager Don Mattingly said. "Everybody needs guys that could do all of things that he can do. I thought the game last year was probably good for him. It got a little fast. I thought he was trying almost too hard to try to force the issue at times. But he did a lot of things that show you that this guy can play at the big league level."

Alvarez used his baseball experience growing up to help him on the path to the Olympics.

"Skating is much more of an individual sport, and then there is a team event once the team is picked," he said. "Even though these are guys that I've known for a long time, you still have to mesh together to bring it together for the team event and baseball. There's a lot of pieces to the puzzle, but thankfully I've grown up playing both sports, so I've always had that team atmosphere with me. I was always so excited for the team event in speedskating. And I think that had to do a lot with growing up playing baseball and the amount of friendships and bonds that I created."

While with the U.S. team, he roomed with Jon Jay, a fellow Miami native with a similar Cuban-American background.

Alvarez hit .273 (3 for 11) in the four qualifiers with two doubles and an RBI triple against Canada's Chris Leroux, who last pitched in the major leagues in 2014.

"The level of pitching is not at the caliber of the consistency of what you see in the big leagues, of that high level. The intensity is still there," Alvarez said. "The velocity might not still be there, but the experience is. And that makes at-bats really tough."

If he goes to the Olympics, he could become only the third American to earn medals at both the Winter and Summer Olympics, after Eddie Eagen in 1920 (gold in light heavyweight boxing) and 1932 (gold in four-man bobsled) and Lauryn Williams in 2004 (silver in 100 meter track), 2012 (gold in 400 relay, though she did not run in final) and 2014 (silver in two-woman bobsled).

Part of the dichotomy of Olympic baseball is that the better you play, the less of a chance you have to reach the Olympics. Stand out enough and you merit a big league promotion.

"If the cards just so happen to be drawn that I get called up to the big leagues and become ineligible to go to the Olympics, then so be it," Alvarez said. "But I know that I'm still part of the dream because I have seen the relationships and bonds that I created here, and I would want nothing -- or I would expect nothing else -- but this squad to go home with a gold if I'm not a part of this team." 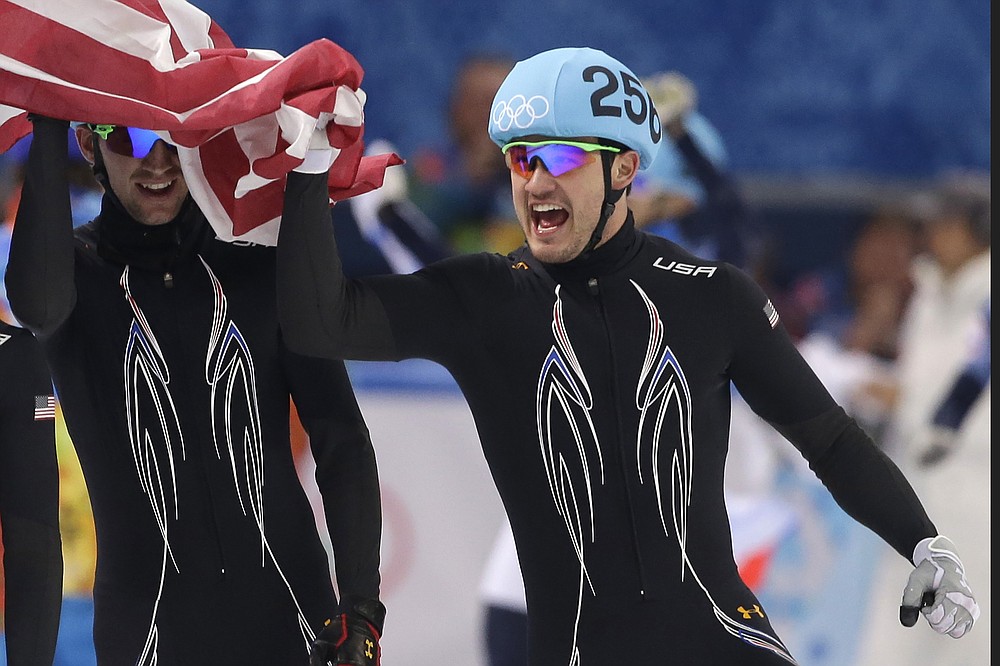 FILE - Eddy Alvarez celebrates with teammates after placing second in the 5000 meter short track speedskating relay final during the 2014 Winter Olympics in Sochi, Russia, in this Feb. 21, 2014, file photo. Alvarez helped the U.S. reach the Olympic baseball tournament and could become only the third American to win medals at the summer and winter Games. (AP Photo/Darron Cummings, File) 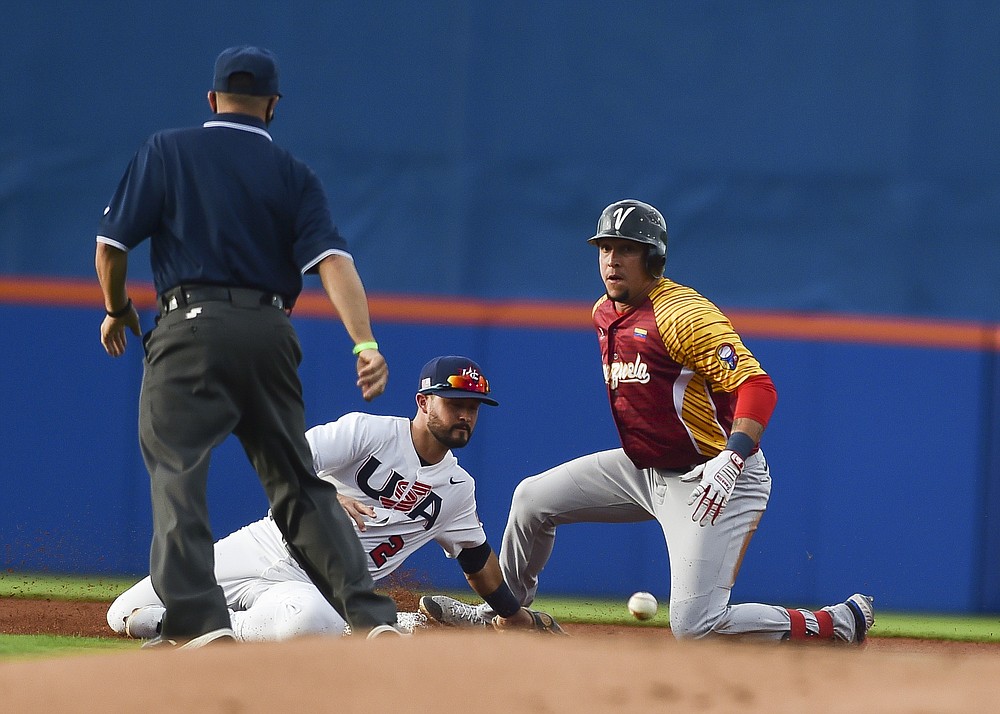 FILE - Venezuela's Hernan Perez, right, is safe at first base as United States' Eddy Alvarez (2) misses the catch in the first inning during an Americas qualifying tournament baseball game in Port St. Lucie, Fla., in this Saturday, June 5, 2021, file photo. Alvarez, having won a silver in speed skating at Sochi in 2014, helped the U.S. reach the Olympic baseball tournament and could become only the third American to win medals at the summer and winter Games.(Crystal Vander Weit/TCPalm.com via AP, File)
ADVERTISEMENT