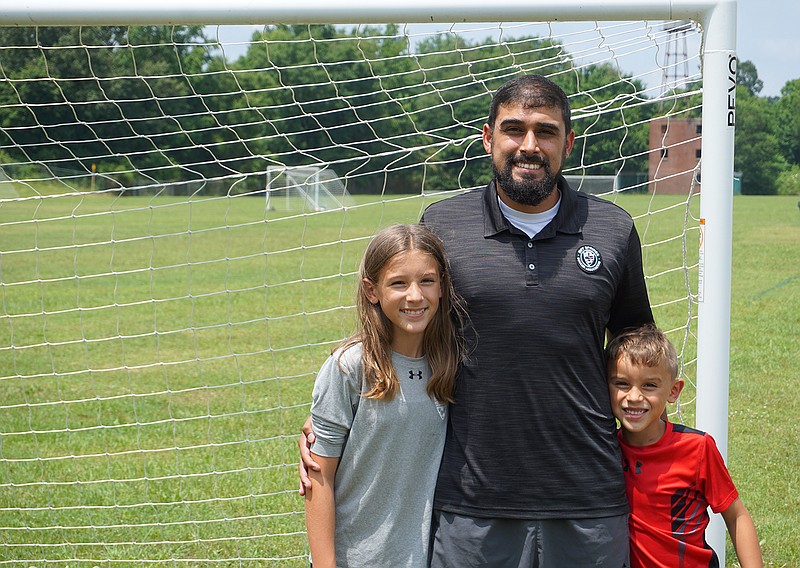 Hot Springs Soccer Association President Edgardo Argueta stands with his daughter Jasmyn and son Jackson on one of the soccer fields at Munro Soccer Complex. The Sentinel-Record/Krishnan Collins

The Rangers, a semiprofessional team based in the state's capital that plays in the USL League 2, will bring coaches and players to Hot Springs to coach many different levels of players.

"I think it's a win-win situation," HSSA President Edgardo Argueta said. "The Little Rock Rangers get some fans from Hot Springs, and the Rangers come here to get that exposure. We get higher level soccer players and coaches that come in from their organization."

The two main camps offered this summer will be the FUN'damentals camp and the Elite Performance Academy.

The camps also will expose players in Hot Springs to a different type of coaching. The Rangers plan to bring in coaches and players from the team to help with the camps, as most of the players coming to coach have high-level playing experience or a coaching license.

"Some of the coaches that are here have been coaching for quite some time," Argueta said. "With this partnership, this will help players see another level of coaching. Now they're going to have somebody else come in and say, 'Hey, let's do this this way,' and they can learn from that experience."

"Especially with the EPA, those players, we're hoping with this partnership, it can open up other doors for interclub, between the two clubs, being able to borrow players and club paths," Argueta said. "With this partnership it opens up the opportunity for players to talk and coaches to talk."

The experience for the young soccer players offers interactions with high level soccer players even if it's not during the actual training session itself. Argueta said a five-minute water break can turn into a 10-minute session on how to do a skill move.

"I was a defender; I wasn't all about the moves and making a defender miss," Argueta said. "That's where the Little Rock Rangers players were able to bring in some of the things. It's not even the camp part of it. It's the interactions between the sessions, the water breaks. They'll show off a move, and the kids will want to know, 'How'd you do that?'"

Argueta played a vital role in forming the relationship between the HSSA and the Rangers. He helped coach at the club's camps in the past and also became a season ticket holder at the club in 2019.

Argueta coached three young teams that got to walk out on the field with the Rangers before a match. While COVID-19 canceled the Rangers' 2020 season, the team is playing once again in 2021 and this time in a new league, the USL League 2.

"That right there (walking out with the national anthem) kind of brought the hope of continuing our partnership," Argueta said. "It's been huge to be able to go back into the stadium with more people. I've started seeing more and more Hot Springs players and parents and families go in."

Moving forward, the HSSA looks to bring two more camps to Hot Springs next summer for even younger soccer players through the Baby Bucks and Young Bucks programs. Winter camps might also come to the Spa City, but that will depend on lighting arrangements at the Munro Soccer Complex.

"I think it's a very mutual respect," Argueta said. "Saying, 'OK, I know that Hot Springs has talent. How can we tap into that talent? We've got Little Rock, we've got a lot of talent here, but let's try branching out.' I'm hoping this is another step in the right direction to keep talent here locally."