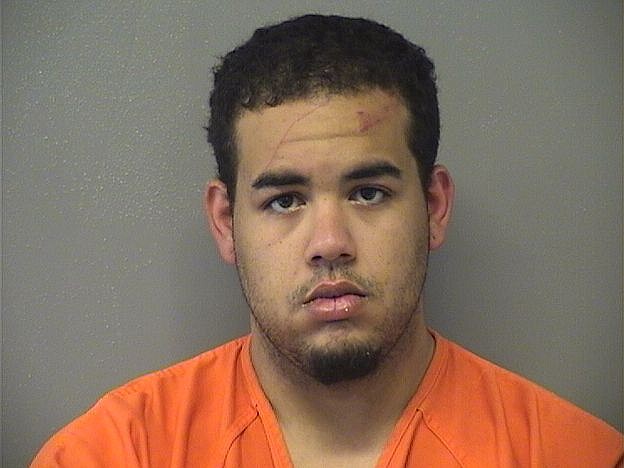 A local man was arrested on multiple felony charges early Tuesday after allegedly stealing a car from a woman he was staying with, fleeing from Hot Springs police and later wrecking the car, which was found destroyed by fire.

Myka Dakwan Augurson, 22, who lists a Goodner Lane address, was taken into custody shortly before 5 a.m. and later charged with felony counts of theft of property over $5,000 and fleeing in a vehicle, each punishable by up to six years in prison. He was being held on a $7,500 bond and was set to appear Wednesday in Garland County District Court.

Augurson, who had a warrant for failure to comply, was also cited for careless and prohibited driving, no liability insurance, driving with lights off to avoid detection and leaving the scene of a property damage accident.

According to the probable cause affidavits, shortly before 4 a.m. Tuesday, HSPD Officer Cody Rollins responded to Candlewood Suites, 3404 Central Ave., regarding the theft of a vehicle and spoke to the female victim who told him a known suspect, identified as Augurson, had stolen her blue 2012 Nissan Altima around 3 a.m.

She said she met Augurson on Monday and they got a room at the hotel around 10 p.m. While in the room, she said she was taking a shower and heard Augurson leave. When she came out, she discovered he had left with her car in an unknown direction, noting Augurson had never driven her car before and was not given permission to take it.

The victim noted there was about $3,000 worth of miscellaneous jewelry, $1,000 worth of clothing, a laptop computer, documents, college textbooks and her ID in her car, which had a Blue Book value of $3,875.

While Rollins was still taking the report from the victim, Officer Jon Green made a traffic stop on what would turn out to be the stolen Altima at the intersection of Files Road and Mockingbird Street after he clocked it speeding at 60 mph with its hazard lights on headed north on Central Avenue.

Asked why he was speeding, the driver, identified as Augurson, claimed he was heading to the hospital because his wife was in labor. When asked which hospital, he said, "St. Chi hospital," and then said, "The hospital with the blue cross."

At that point, a dispatcher advised Green the car had been reported stolen and Green noted Augurson matched the description given of the person who took it. Green asked Augurson to turn off the car and he complied, but "seemed to be nervous" and asked why he needed to shut it off.

Green explained the car might be one being sought and Augurson reportedly admitted it was, but claimed he was "getting it back to the old lady so he can head to the hospital." Then he proceeded to roll up his window, start the car and flee the scene headed north on Files Road.

Green got back in his unit and began a pursuit of Augurson, who had turned off his headlights and was driving with just the hazard lights on. Other officers joined the pursuit and lost sight of him briefly at Files and Section Line Road, but then Cpl. Zac Brown got behind the car near Central and Cornerstone Boulevard.

Brown had to terminate the chase at Central and Lakeland Drive for safety reasons when speeds reached over 90 mph on roads that were wet from the rain.

At around 4:12 a.m., officers responded to a property damage wreck involving a car that was "fully engulfed in flames" at Central and Burchwood Bay Road. The car found was determined to be the stolen Altima, but Augurson was not in or around it at that time.

He was later found in the 100 block of Brighton Terrace and since he had been in a wreck, LifeNet responded to evaluate him. He was transported to CHI St. Vincent Hot Springs for further evaluation and later discharged and taken into custody. He was booked into the Garland Detention Center around 9:45 a.m. Tuesday.