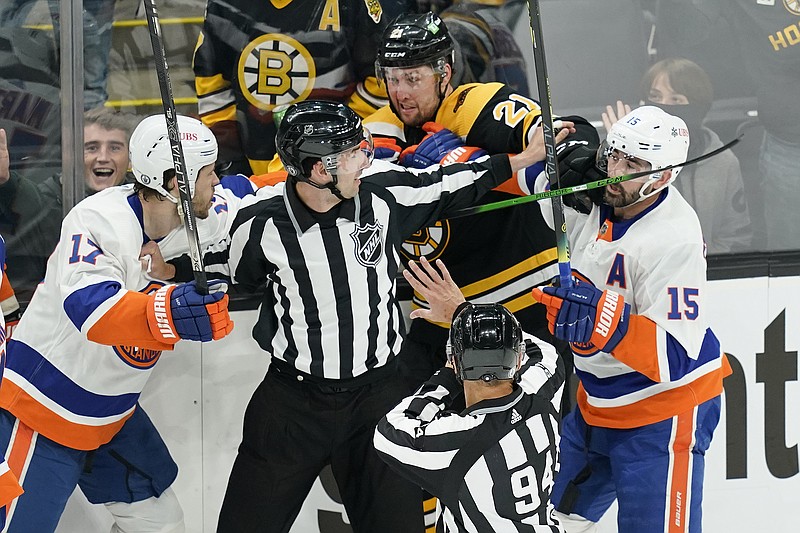 Referees keep Boston Bruins left wing Nick Ritchie (21) from fighting with New York Islanders left wing Matt Martin (17) and right wing Cal Clutterbuck (15) on May 29 in the first period of Game 1 during a second-round playoff series in Boston. - Photo by Elise Amendola of The Associated Press

Officiating has been on center stage midway through the NHL playoffs.

Star forward Connor McDavid didn't draw a single penalty when Edmonton got swept in the first round. Tampa Bay dominated a second-round series against Carolina thanks to a potent power play. And a war of words between coaches Barry Trotz and Bruce Cassidy has spiced up an already hot Islanders-Bruins series.

Calls made, and not made, and the ensuing results are tipping the balance of the postseason. The spotlight is on referees and linesmen for the impact they're having on the way to some team lifting the Stanley Cup.

"I don't work them," Trotz said Tuesday. "I respect them because I worked the referee situation (in practices) in the bubble last year and I got ran over. I tried to call penalties, I tried to call offsides, I got hit with pucks, I got knocked over -- I got all that stuff. I've been in the league a long time: It's a hard job, and I have a lot of respect for those guys."

So much respect that he and Cassidy have mentioned officials a handful of times. Trotz said it was up to linesmen to keep Bruins center Patrice Bergeron from "cheating" on faceoffs. Cassidy quipped after Boston's Game 5 loss to New York: "They sell a narrative over there that it's more like the New York Saints, not the New York Islanders."

The comment cost him $25,000 in a fine from the league for publicly criticizing officiating.

"Most of what I thought I said was more in reference to the Islanders, a little gamesmanship with Barry, his comments towards Bergy," Cassidy said. "I'm always going to protect my captain and kind of push back a little bit. Listen, we're in front of the cameras a lot in media and it's an entertainment business, it's been a good series so there's a little bit of that back and forth."

Islanders-Bruins isn't the only series officiating has factored into. McDavid not earning a penalty call against Winnipeg in the first round became a hot-button issue: The likely MVP tied for the second-most penalties drawn during the regular season.

McDavid said going into the playoffs: "The hooking and the holding and the holdups and all that stuff are things that I've dealt with my whole life. It's nothing new."

After his Oilers were swept by the Jets, coach Dave Tippett wondered aloud, "How can that be that he doesn't draw a penalty every game that I watch?" Now he and McDavid are left watching the rest of the playoffs.

The Hurricanes are joining them based almost entirely on a parade to the penalty box that gave the Lightning power-play target practice all series. Tampa Bay scored seven times on 16 power plays.

"Their (power play) -- there's just too much there," Carolina coach Rod Brind'Amour said before his team lost in five games to Tampa Bay. "We said that coming in was going to be the difference: If we could stay out of the box, then we'd have a chance."

There's always a chance that a comment or two about officiating will have an impact.

Vegas coach Peter DeBoer tried to do his part to affect officiating in his team's series against Colorado. DeBoer said after Game 2 he "can't even blame the refs because they're fighting the embellishment of grabbing your face or falling down or dropping your stick every period."

Setting aside delay of game penalties, the Golden Knights were whistled for three penalties to the Avalanche's seven in Games 3, 4 and 5 -- and took a 3-2 series lead.

Bergeron called Trotz's comments about his faceoffs a "veteran play" to get linesmen to think about their part of the gamesmanship of a series.

Cassidy pointing out "the exact calls that are getting called on us do not get called on them" was part of his answer that drew the hefty fine, but he doesn't want anything said off the ice to affect penalties the rest of this series.

"Will that have effect going forward? I've said any comments shouldn't," he said. "The refs should call what they see." 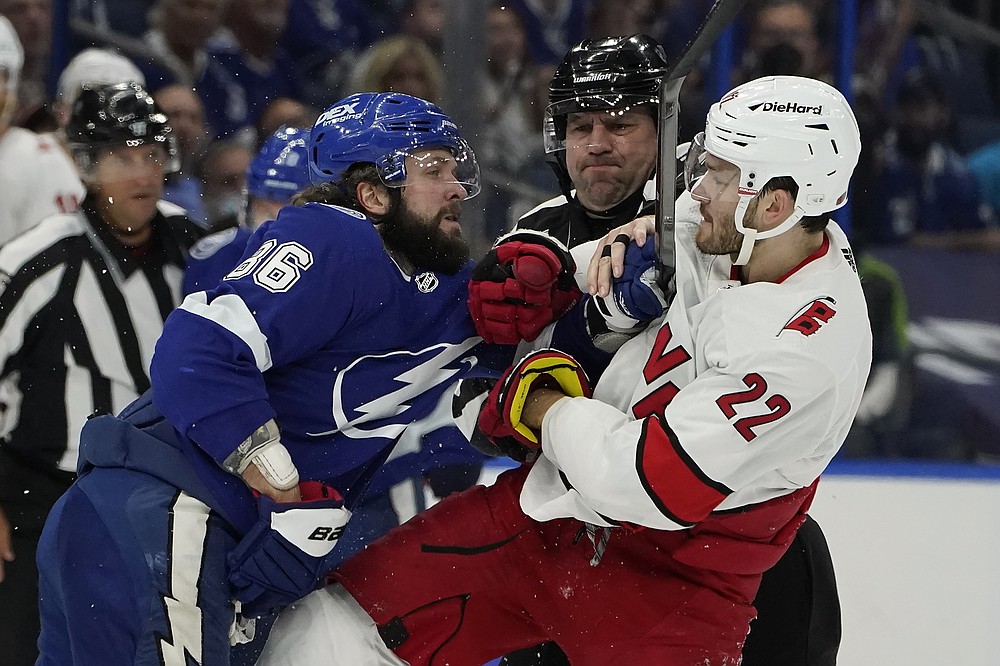 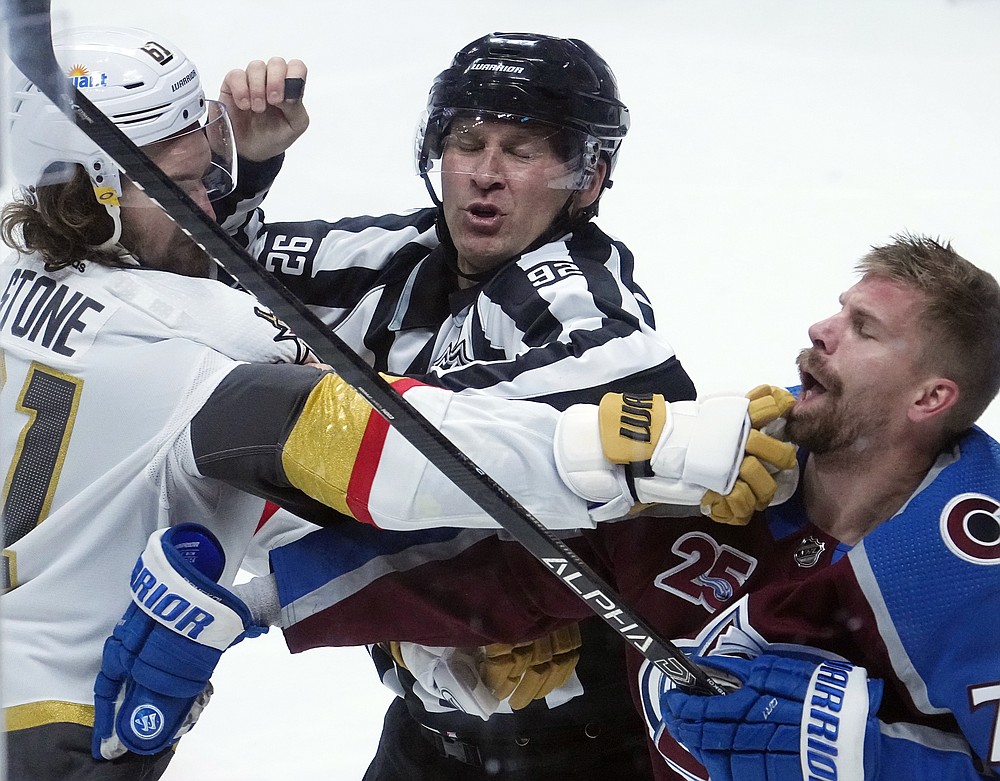 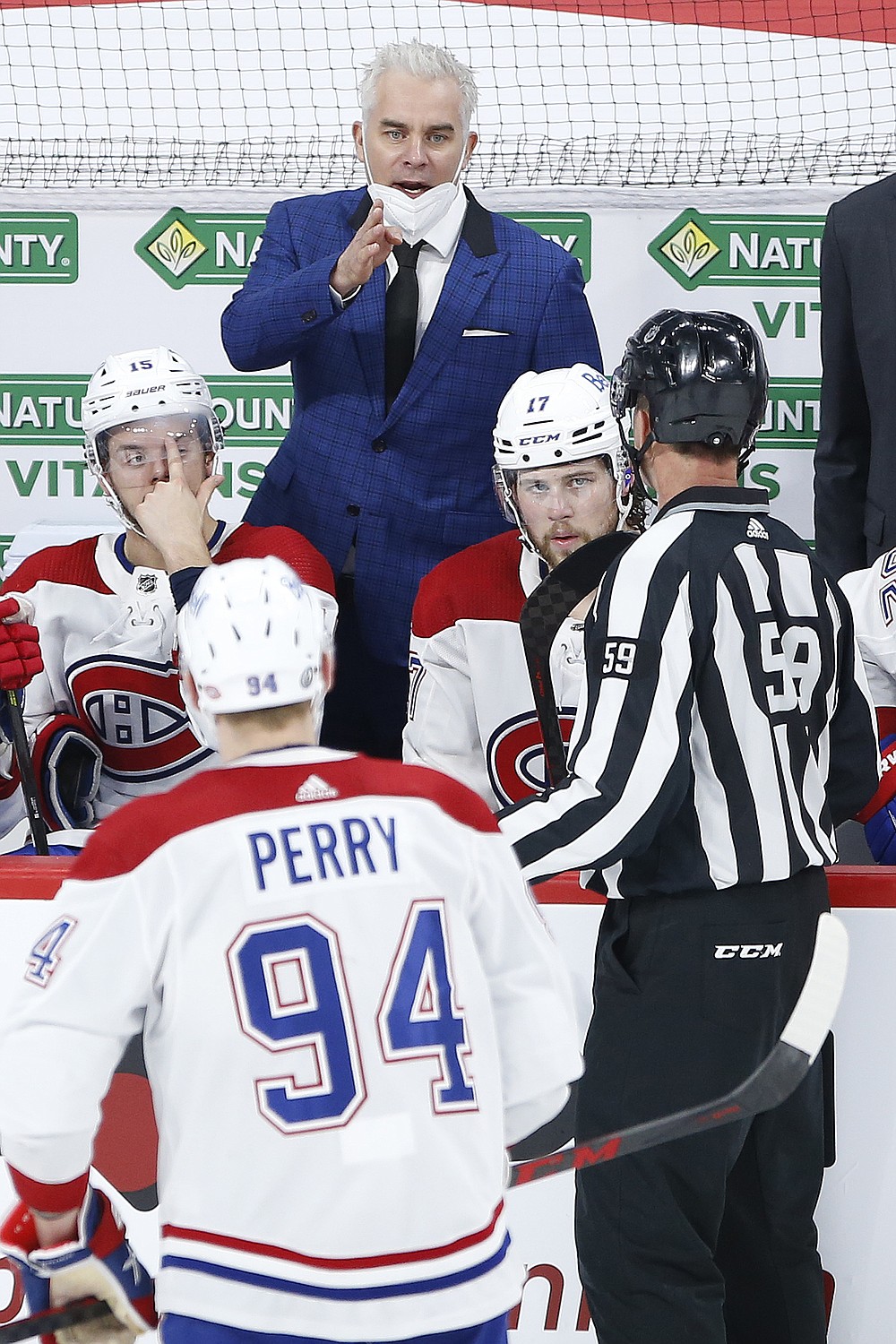 Montreal Canadiens coach Dominique Ducharme talks to a linesman during the third period of Game 2 of an NHL hockey Stanley Cup second-round playoff series against the Winnipeg Jets on Friday, June 4, 2021, in Winnipeg, Manitoba. (John Woods/The Canadian Press via AP) 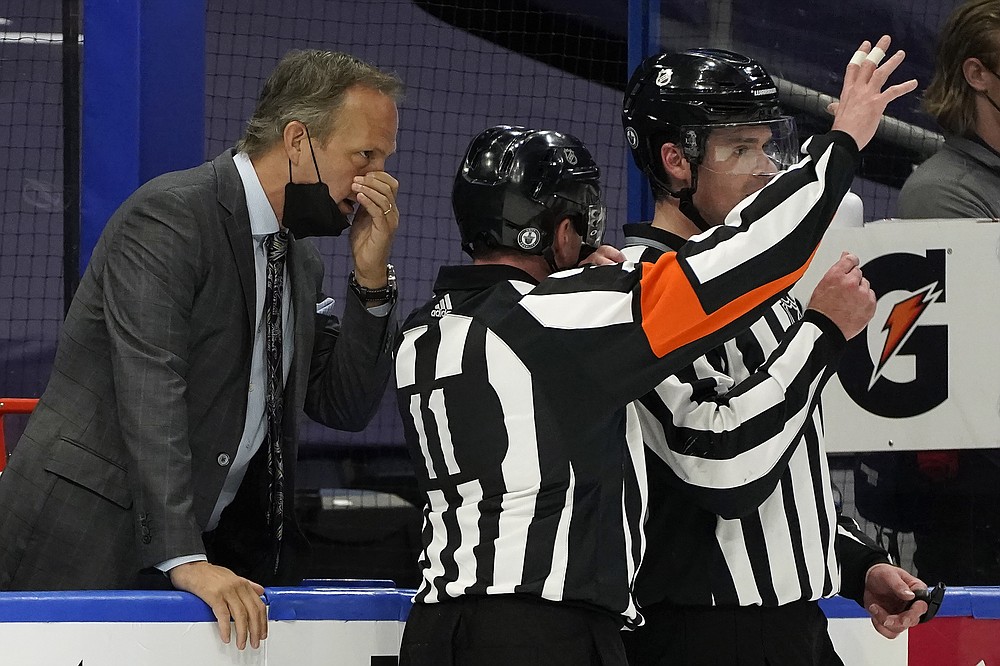