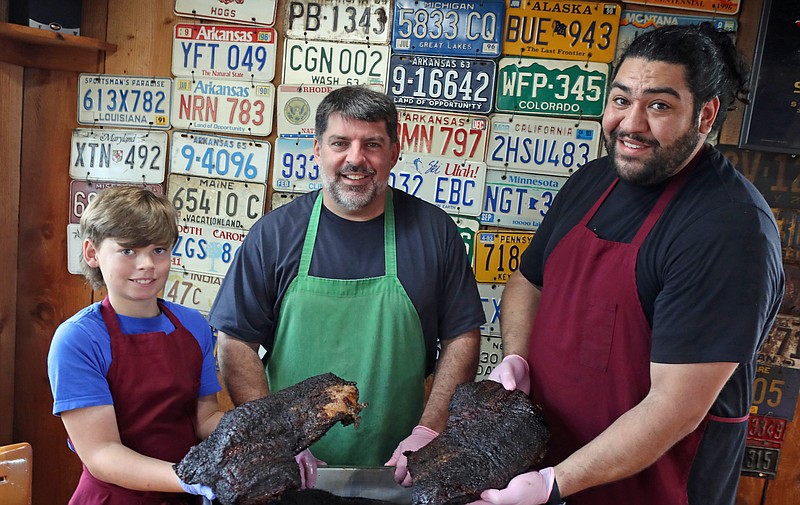 From left, Palmer Dunkel, Chris Dunkel and Nathan Cook display some of the barbecue at Stubby’s BBQ Thursday. - Photo by Richard Rasmussen of The Sentinel-Record

"I just appreciate the fact that we're still here after close to 70 years, and I kinda manage a place that has allowed us to continue on," Chris Dunkel says.

Dunkel grew up inside a Stubby's BBQ restaurant. He said it started back in 1952 on Park Avenue before his family bought it in the '70s from the original owners when he was 3 years old. Dunkel now runs the restaurant, which has had different locations, and now stands on Central Avenue.

Dunkel said the biggest change he's seen throughout the years is in the technological side to business, with them adapting and embracing the technology of the day. They've set up their website for online orders and offer home deliveries through Bite Squad.

"So, I've realized, being also a tourist town, that you have to adapt to cater to the needs of your local clientele, but also all the folks that are coming in from out of town," he said.

The process of preparing the food starts early. Dunkel said the brisket and pork go into the pit around 6 or 7 p.m., cooking all night before they pull them out around 7 or 8 a.m. the next day. After that, ribs, chicken, and more go in the pit in the morning while they prepare other foods, such as coleslaw and potato salad.

The restaurant opens up at 11 a.m., and is open seven days a week.

Dunkel describes the food prep process as a wheel that never stops spinning, because they're always preparing, cooking, and marinating items.

"All of this stuff is just labor intensive, to where we don't just cut a bag, dump it and serve it. It's the amount of prep that goes into keeping everything caught up," he said.

However, Dunkel said the passion they put into it is what makes them stand apart from the crowd.

"It's the daily grind of putting out exceptional product seven days a week. We still do everything by hand. We haven't deviated from the process from the '50s," he said.

When asked what Stubby's means to him, Dunkel said "family, wonderful customers, a wonderful group of people that believe in me that I have working here."

"I'm just thankful that we still have our customers that believe in us, the group that I have here that stand behind me and continue the product that we put out on a daily basis, and just the attentiveness to detail. Because if the detail starts to lack and the belief in what you're doing, then everything goes away," he said. 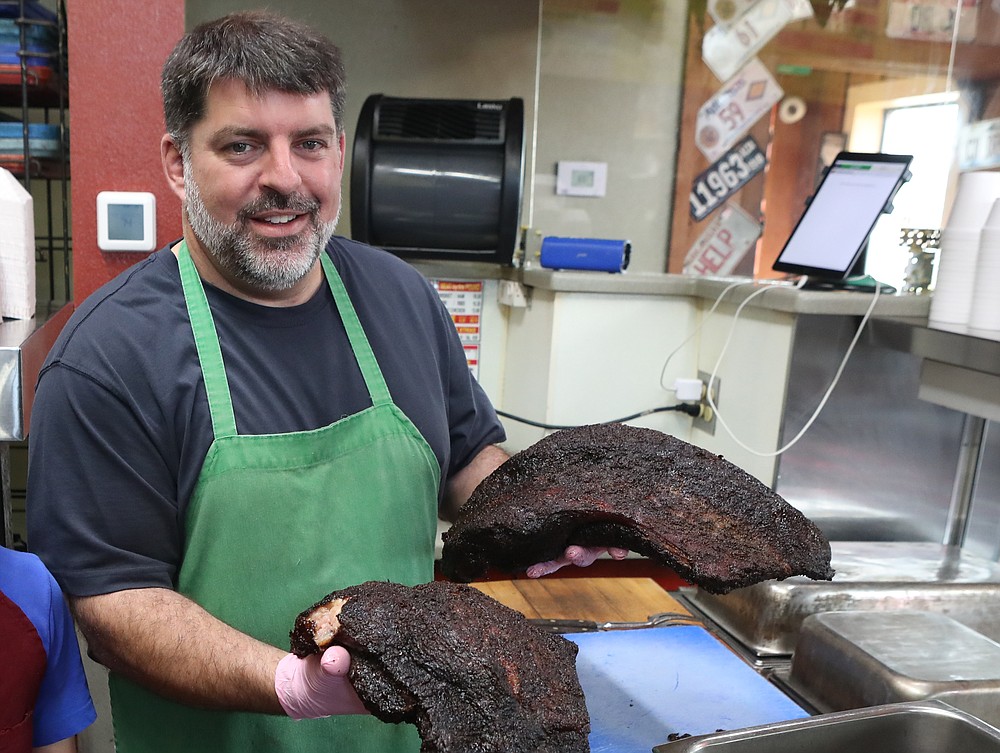 The following are excerpts from the interview with Chris Dunkel, presented in a question-and-answer format:

What is your favorite restaurant anywhere?

Dunkel: Well when you're in the meat business, you always kinda gravitate towards something else. So, I would say anything seafood-related. When you get to enjoy some wonderful, fresh seafood off a boat or if you're spearfishing somewhere and you actually spear your own grouper and then get to filet it and prepare it later that night. I would say probably anything that comes out of the ocean.

What's the best cooking advice you have?

Dunkel: You're always learning. Never become complacent. ... You're always trying to improve. You always want to stay hungry. Because if you become lax and lazy to detail, that's when things start to fracture, and then before you know it, you're playing catch-up. So there are other people out there that are going to be working just as hard as you are or harder, but you can't rest on your laurels. So one thing that I always continue to push for here is that we can't become complacent in where we are in our history, we're here because we continued the process, we continued to make sure that our product stays up to par seven days a week. You cannot think 'Oh, I'm just gonna do this, I'm gonna cut this corner.' No, you can't do that. Because that will resonate with someone and that could potentially cause them to not want to come back. So, it's keeping in front of all your competition out there but also not just becoming lazy because of who you are. You have to continue and stay hungry.

What inspired you to start cooking?

Dunkel: Starting at an early age, the craft of barbecue, it's something you don't really pick up overnight. It takes some time. I mean, you have to learn how to work your pit, then you have to learn obviously the meats you're gonna be using, the preparation, how you're going to find a suitable product on a daily basis, because we don't want to use sub-rate products. So it's all the years of working through all the different purveyors out there and finding the actual items on a daily basis that meet your specs. So you can always find cheaper products, but that means you're gonna have a cheaper product for your customer, so you gotta stay above the bar. But then, on your preparation, you have to take the time to prepare it correctly, marinate it, the process on the pit, smoking it 12-14 hours. There's the niche for each item. Then, as it comes off, the way you slice it, the way you're preparing the sides. ... So you're still honing your effort on a daily basis. You're still keeping true to the '50s style mentality as far as preparation. ... But it's the nuts and bolts of smoking meat over an open fire, and when you get to go online you see the crafts of others throughout the country that have made a name for themselves, it's an art. And it's wonderful that we're here in a little community like Hot Springs and people love us. People travel around and want to try us and then try all my other friends who have barbecue places around here as well. It's just nice because it's a compliment to your craft.

Check back each week for another installment of Foody Friday featuring a local restaurant in Garland County. 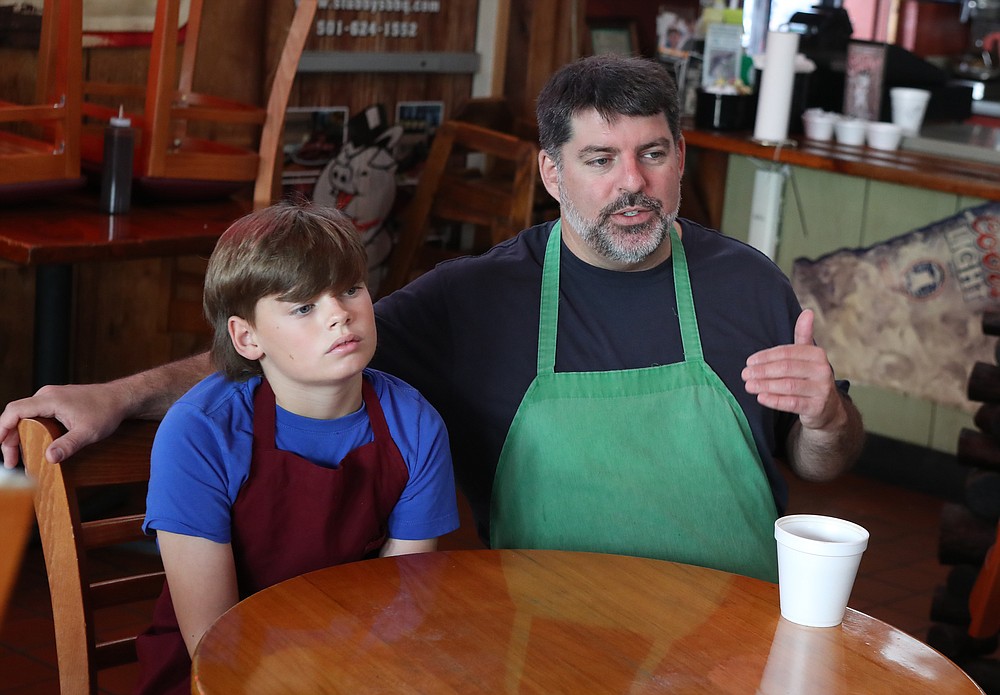 Palmer Dunkel, left, is growing up in the family business much like his father Chris Dunkel, right, did at Stubby’s BBQ. - Photo by Richard Rasmussen of The Sentinel-Record

Measurements are to taste. Mix ingredients together and marinate ribs or chicken prior to smoking.