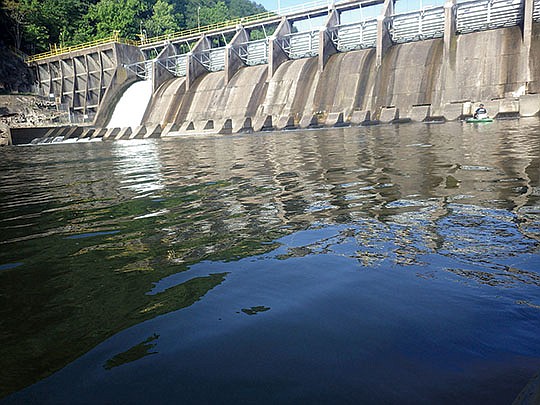 Floating the Ouachita River from Remmel Dam to Rockport usually entails paddling to the base of the dam before heading downstream. - Photo by Corbet Deary of The Sentinel-Record

Entergy Arkansas continues to work with the U.S. Army Corps of Engineers to pull Lake Ouachita out of the flood pool, but intends to make recreational releases into the Ouachita River below Remmel Dam this weekend.

"If Lake Ouachita raises significantly above the flood pool elevation of 578, we may be required to release more flow than required for the recreational releases to help draw Lake Ouachita down," Entergy said in an email on Thursday.

Lake Ouachita was at 578.64 feet above mean sea level Thursday morning, having dropped 0.01 feet in the previous 24 hours. The flood pool starts at 578 feet msl.

The normal minimum flow from Remmel Dam, which forms Lake Catherine above the Ouachita River, is 200 CFS for June.

"We plan to release approximately 7,000 CFS for most of the week except during the recreational releases (3,600 CFS) scheduled for Friday, June 11, through Sunday June 13," from 11 a.m. to 5 p.m. "More could be released on a non-scheduled basis for lake level management," the email said.

"Everyone please take note that when putting in at Remmel Dam, water released during generation takes approximately 2 hours to reach the Malvern whitewater park (most floats take 3-4 hours). Thus if we stop generation flows at 5 p.m. (like we do most weekends) you will only have roughly until 7 p.m. to make it to the park or you might have to walk for an extended portion of your trip. Entergy recommends putting in no later than 3 p.m. to make your trip the most enjoyable," it said.

Entergy closes the vehicle access gate to the area below Remmel Dam for safety reasons at 10 p.m. and reopens it at approximately 5 a.m. daily.

Another Corps of Engineers impoundment south of Hot Springs, DeGray Lake, is scheduled to release approximately 5,500 CFS for six hours each day next week. More could be released on a non-scheduled basis for lake level management, the email said.

DeGray has a minimum flow of 150 CFS.