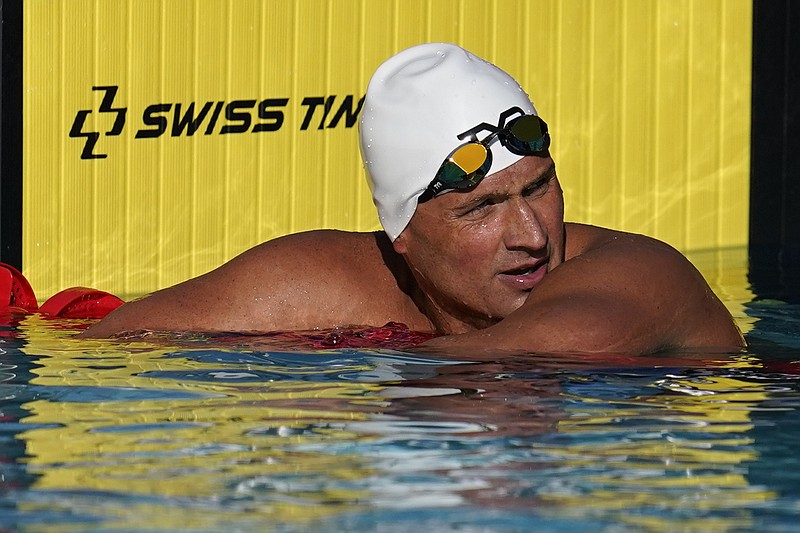 Ryan Lochte pauses after competing in the men's 200-meter freestyle preliminary race on April 8 at the TYR Pro Swim Series swim meet in Mission Viejo, Calif. Lochte, the swimmer who embarrassed himself and the U.S. five years ago in Rio de Janeiro, is seeking to make a record-tying Olympic team. - Photo by Ashley Landis of The Associated Press

OMAHA, Neb. -- Ryan Lochte knows what people think of him. He's eager to make them forget the worst.

The swimmer who embarrassed himself and the U.S. five years ago in Rio de Janeiro is seeking to make a record-tying fifth Olympic team.

But time is no longer on Lochte's side. He's 36, married and the father of two young children. His scandalous behavior in Rio seems so long ago. "My life has completely changed," he said, gray streaking the temples of his closely cropped hair.

Michael Phelps, now retired and a father of three, knows the daunting challenge his former teammate and rival faces at the trials that begin Sunday.

"You're older. You're different. Your body changes. Your mentality is different," Phelps said before the coronavirus pandemic pushed back the Tokyo Olympics by a year, seemingly making it even harder for Lochte. "You can't do as much in the pool. The other things outside the pool take up your time."

"More than anything I want to make the Olympic team and medal at the Olympics," he said. "That would be proving a lot of people wrong and that's what I want to do."

His results leading into trials haven't signaled that he's poised to join Phelps and Dara Torres in making the most Olympic appearances of any American swimmer. Since Rio, Lochte has competed sporadically and hasn't come close to being his former dominant self.

Lochte is seeded 15th in the 400-meter individual medley, which opens the trials. He's entered in six events over the eight-day meet, although it's unlikely he'll swim every one. The 200 IM, in which he still owns the world record set in 2011, appears to be his best chance. He's seeded fifth.

"I don't have that target on my back anymore," he said. "I know I'm hunting them instead of being the hunter."

Lochte returned to his college training town in Gainesville, Florida, nearly three years ago. Besides reuniting with Troy, he goes against Caeleb Dressel, the world's top male swimmer, daily in practice.

"I'd give him a very serious chance of medaling and winning at the Olympics, not just making the U.S. team," Dressel said. "I'm not really buying the whole old-man thing anymore. He knows how to get up and boogie."

His days of drinking to excess and carousing until the wee hours ended some time after Rio. That's where Lochte lied about being robbed at gunpoint at a gas station, along with three teammates. He later apologized, got suspended by USA Swimming for 10 months, and lost his major sponsors. Two years later, Lochte was suspended 14 months by the U.S. Anti-Doping Agency after he posted a photo online of him getting a vitamin B-12 infusion, which exceeded allowable limits.

"I've changed my life around completely," he said. "I'm a better person, I'm more grown up. I'm a family man, I'm a dad and a husband."

The swimmer credits his wife, Kayla, 4-year-old son, Caiden, and daughter, Liv, who turns 2 next Thursday, with fostering the changes in his behavior.

"I'm obsessed with being a dad," Lochte said. "It's the funnest thing in the world."

Troy knows he's working with a different Lochte than the swimmer who prowled the bars in Gainesville during and after his college years at Florida, alternately puking and generously picking up tabs for others.

"There's an acknowledgment on his part that maybe this is the last go-around and he certainly wants to leave with a little better taste in his mouth than maybe what he created," Troy said.

Lochte is already one of the greats of the sport. His 12 medals, including six gold, make him the second-most decorated swimmer in Olympic history behind only Phelps. Torres, Natalie Coughlin and Jenny Thompson also have 12 career medals.

He remains a welcome presence on the pool deck, with fellow swimmers calling him "Big Daddy."

Whatever happens at the trials, Lochte will be at peace with himself. 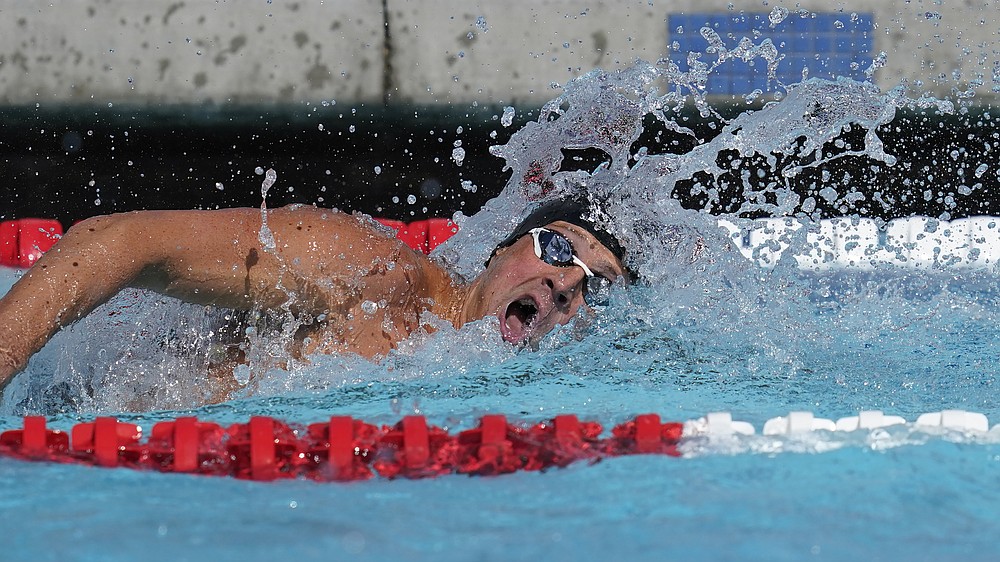 FILE - In this April 9, 2021, file photo, Ryan Lochte competes in the men's 200-meter final at the TYR Pro Swim Series swim meet in Mission Viejo, Calif. Lochte, the swimmer who embarrassed himself and the U.S. five years ago in Rio de Janeiro, is seeking to make a record-tying Olympic team. (AP Photo/Ashley Landis, Fole)
ADVERTISEMENT