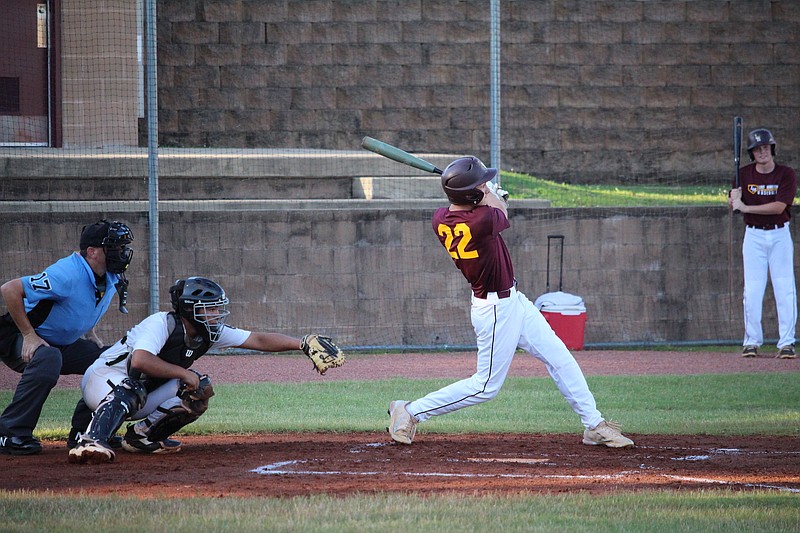 Lake Hamilton's Ethan Brock swings at a pitch against Little Rock Tuesday at Wolf Field. - Photo by Krishnan Collins of The Sentinel-Record

Lake Hamilton started slow and fell behind early to Little Rock, giving up three runs in the first inning.

Wolves' pitcher Cade Payton hit four different batters in the first inning, leading to a run after Brett Gassman was beaned with the bases loaded. Cole Summers scored on a Hunter Belton single before Payton walked in another run with the bases loaded to give Little Rock an early 3-0 lead.

Despite a slow start, the Wolves scored two runs in the bottom of the second and tied the game in the third when Bradyn Clark scored on a wild pitch.

Even after the Wolves gained some momentum, Little Rock came back with a strong fourth inning, scoring three runs to take a 6-3 lead. That lead grew to 7-3 in the fifth after Zach Bell singled to left field to plate Dallan Young.

Down by four, the Wolves started a rally in the sixth inning when Ben Muldoon hit a grounder to third base, but a wild throw let Muldoon advance to second. Haydn Estrada pinch ran for Muldoon before advancing to third on a wild pitch. Estrada took advantage of another ball past Little Rock catcher Jack Cline to pull the Wolves within 7-4.

Dylan Horton kept Lake Hamilton's rally alive with a walk before advancing to second on a pitch in the dirt. Horton eventually scored on a ground ball to make it a two-run game, but that was the last time the Wolves scored.

In the early game, Easton Hurley pitched all six innings for the Wolves.

After a pitcher's duel kept the game scoreless through four and a half innings, Lake Hamilton's bats came alive in the bottom of the fifth. The Wolves scored seven runs to jump out to a decisive 7-0 lead in the inning and put the game away.

Kohen Manley led off the inning with a single to left field before the game really opened up after Ethan Brock sent a bunt up the third base line and beat the throw to first. On his way to first, the glove of Little Rock's Eli Coleman collided with Brock's face as the ball got away, and Manley advanced to third. Brock left the game, and Estrada came in to pinch run.

Ben Varner drove in the first run of the game with an RBI single before Horton hit a gapper into right field for the 3-0 lead. Jace Joiner hit a deep double with the ball bouncing off the left field fence to put Horton in scoring position. In almost a carbon copy of the previous hit, Matt Carmack hit a laser to left field that bounced off the fence in almost the exact same spot for two RBIs.

Although Little Rock's Ridge Agar pitched four great innings, the fifth got away from him and left hander Haydon Mercer came into the game in relief.

Manley drove in Carmack on a single before the Wolves scored their final run of the game after a pick off attempt by Mercer got away from Coleman as Tanner Byrns scored from third.

Hurley was one inning away from shutting the visitors out, but a balk in the top of the sixth plated Will Bratton to set the final.