Pielemeier pushes self to excel as distance runner 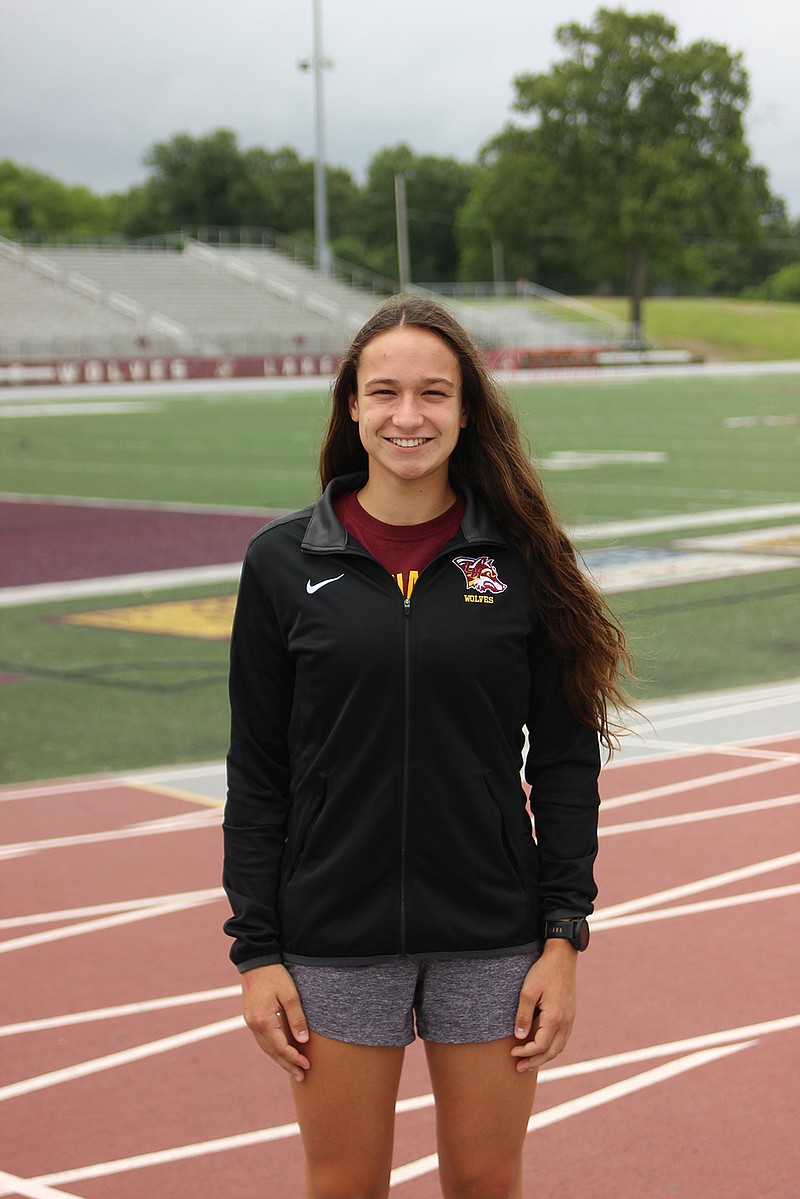 Lake Hamilton junior Olivia Pielemeier stands on the track at Wolf Stadium on June 7. - Photo by James Leigh of The Sentinel-Record

PEARCY -- Despite just finishing her sophomore season, Olivia Pielemeier has made a name for herself across the state in both track and cross country.

The Lady Wolf has set new school records in the 1,600-meter, besting former Lady Wolf Josie Carson's record during the Lake Hamilton invitational on April 15 before breaking her own record while competing in Alabama on June 12.

"If anything, it's kind of left me more thirsty to break it again," the sophomore said earlier this month. "I mean, it's like, you do one thing, and then you have that one goal, and then you set another one. And so then, you know, you want to keep going. So I mean, definitely, I'm not satisfied by any means. I want to keep working for it, but if I felt good."

While many athletes saw their ability to train and compete halted last March due to the COVID-19 pandemic, runners were able to continue training, due to the indivdual nature of the sport. Pielemeier was no different.

"I don't think it's hurt the ability to perform, because if anything, it really helped me out," she said, noting that while she was unable to compete against other runners, she was able to continue her training. "I mean, really, with everything being shut down, there's only so much you can do. So for me, it kind of, I guess, flipped a switch, and it allowed me to be able to put my time into that, besides sitting at home, unable to see people looking at a wall. So for me, it really benefited me."

In fact, Pielemeier said that the lack of track meets left her more hungry to try and improve her times -- seeing herself as her own biggest competitor.

"I still had the same opportunities as I did a year ago, or I guess a year and a half ago," she said. "But for me, it was just mentally I knew ... I have goals I want to work towards, and so that happening at the same time, and then me wanting to accomplish things that I haven't yet accomplished, it just kind of helped put it more in motion for me."

"I had some friends, and they were like, 'Yeah, you run a lot of miles.' It sounded absolutely awful," she recalled. "But sure enough, like coach Koonce always does, (he) talks everybody into doing it. And so I got sucked into it and did it a few times and figured out that I enjoyed it -- and wasn't half bad at it. So I've been running ever since."

Lake Hamilton head cross country coach and assistant track and field coach Brandon Smith said that early on the coaches could see Pielemeier's drive to compete and be the best.

"I think the early thing that we saw with her was just a drive to like, not want to get beat," he said. "And so I think ... the first time I ever saw her compete was just her initiative to like, give everything she had in a race. And you know, she didn't always win early on -- she was always up there.

"But, but whether she was first or she was right there at first, it was just like, you know, here's this young lady who just has this drive and his natural niche to want to compete to the best of her ability and not like to get beat. And so to me, that was the thing that just really stood out, apart from other kids was, you could just tell she had it from the very moment that you know, she could be a special runner, because of that niche to just not want to be defeated."

While Pielemeier is becoming an elite runner, she said that her athletic ability did not come from her parents. Her father did not play any sports, and her mother was a cheerleader and dancer.

"My mom kind of laughed," Pielemeier recalled of telling her parents that she was interested in running. "'I'm gonna try cross country and track.' She's like, 'Alright, you have fun. I'm not running with you.'"

Pielemeier said that despite being able to compete at a high level that she still has bad days.

"Nobody has perfect day," she said. "I mean, we did a workout last week where, I mean, I got into like my -- What was that? My fifth one? -- I went to coach, and I was like, 'Not feeling it today.' And then we had a workout day before yesterday, and I hit it right on. I mean, you just kind of have to remind yourself that's all a process. You know, you're not going to see results overnight."

Smith said that one thing that he tries to do with all of the runners he works with is give them small, achieveable goals.

"Just kind of think of the idea of throwing a carrot out in front of the horse to chase there," he explained. "It's just kind of having something that I feel like, 'Is this going to push her?' but also a small step as far as another achievement type of step. So whether that's a workout, or talking about going and doing a special race somewhere that she hasn't been a part of, you know, we focus on talking about those kinds of goals."

While she still has plenty of time to consider future steps in her running career, Pielemeier said that she would like to run on the collegiate level.

Print Headline: Pielemeier pushes self to excel as distance runner