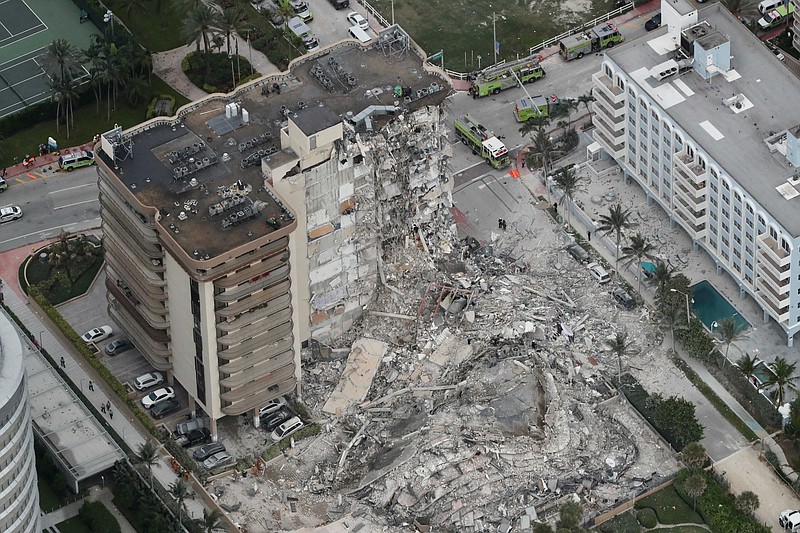 SURFSIDE, Fla. -- A beachfront condo building partially collapsed Thursday outside Miami, killing at least one person and trapping others in the tower that resembled a giant fractured dollhouse, with one side sheared away. Dozens of survivors were pulled out, and rescuers kept up a desperate search for more.

A wing of the 12-story building in the community of Surfside came down with a roar around 1:30 a.m. By late evening, nearly 100 people were still unaccounted for, authorities said, raising fears that the death toll could climb sharply. Officials did not know how many were in the tower when it fell.

"The building is literally pancaked," Surfside Mayor Charles Burkett said. "That is heartbreaking because it doesn't mean, to me, that we are going to be as successful as we wanted to be in finding people alive."

Hours after the collapse, searchers were trying to reach a trapped child whose parents were believed to be dead. In another case, rescuers saved a mother and child, but the woman's leg had to be amputated to remove her from the rubble, Frank Rollason, director of Miami-Dade emergency management, told the Miami Herald.

Video showed fire crews removing a boy from the wreckage, but it was not clear whether he was the same person mentioned by Rollason. Teams were trying to enter the building from a parking garage beneath the structure.

Gov. Ron DeSantis, who toured the scene, said television did not capture the scale of what happened.

Rescue crews are "doing everything they can to save lives. That is ongoing, and they're not going to rest," he said.

Teams of 10 to 12 rescuers at a time entered the rubble with dogs and other equipment, working until they grew tired from the heavy lifting, then making way for a new team, said Florida Chief Financial Officer Jimmy Patronis, the state's fire marshal.

"They're not going to stop just because of nightfall," Patronis told Miami television station WPLG. "They just may have a different path they pursue."

Patronis said he was deeply moved by the image of a bunk bed near the now-exposed top of the building.

"Somebody was probably sleeping in it," he said. "There's all those what-ifs."

Authorities did not say what may have caused the collapse. On video footage captured from nearby, the center of the building appeared to fall first, with a section nearest the ocean teetering and coming down seconds later as a huge dust cloud swallowed the neighborhood.

Work was being done on the building's roof, but Burkett said he did not see how that could have been the cause.

Hotels opened to some displaced residents, the mayor said, and deliveries of food, medicine and more were being hastily arranged.

About half of the building's roughly 130 units were affected, the mayor told a news conference. Rescuers pulled at least 35 people from the rubble by mid-morning, and heavy equipment was being brought in to help stabilize the structure to provide more access, Raide Jadallah of Miami-Dade Fire and Rescue said.

The tower has a mix of seasonal and year-round residents, and while the building keeps a log of guests, it does not keep track of when owners are in residence, Burkett said.

Fortuna Smukler posted about the disaster on Facebook, hoping that someone would know the whereabouts of Myriam Caspi Notkin and Arnie Notkin, an elderly couple who lived on the third floor.

"He was such a well-liked P.E. teacher from people's past," she said. "Everyone's been posting, 'Oh my god, he was my coach.'"

"It would be a miracle if they're found alive," she added.

Nicholas Fernandez spent hours after the collapse trying to call two friends who were staying in the building with their young daughter. The family had come to the United States to avoid the COVID-19 outbreak in their home country of Argentina, said Fernandez, of Miami.

"The hope is that, perhaps, someone hears the call. I know there are dogs inside," he said. "I know it may sound ridiculous what I'm saying but there's always hope until we hear different."

A total of 22 South Americans were missing in the collapse -- nine from Argentina, six from Paraguay, four from Venezuela and three from Uruguay, according to officials in those countries.

The collapse, which appeared to affect one leg of the L-shaped tower, tore away walls and ripped open some homes in the still-standing part of the building. Television footage showed beds, tables and chairs inside. Air conditioners hung from some parts of the building, where wires dangled.

Barry Cohen, 63, said he and his wife were asleep in the building when he first heard what he thought was a crack of thunder. The couple went onto their balcony, then opened the door to the building's hallway to find "a pile of rubble and dust and smoke billowing around."

"I couldn't walk out past my doorway," said Cohen, the former vice mayor of Surfside.

Surfside City Commissioner Eliana Salzhauer told WPLG that the building's county-mandated 40-year recertification process was ongoing. Salzhauer said the process was believed to be proceeding without difficulty. A building inspector was on-site Wednesday.

"I want to know why this happened," Salzhauer said. "That's really the only question. ... And can it happen again? Are any other of our buildings in town in jeopardy?"

The seaside condo development was built in 1981. It had a few two-bedroom units on the market, with asking prices of $600,000 to $700,000. The area's neighborhood feel offers a stark contrast to the glitz and bustle of nearby South Beach.

The area has a mix of new and old apartments, houses, condominiums and hotels, with restaurants and stores serving an international combination of residents and tourists. The main oceanside drag is lined with glass-sided, luxury condominium buildings, but more modest houses are on the inland side. Among the neighborhood's residents are snowbirds, Russian immigrants and Orthodox Jewish families. 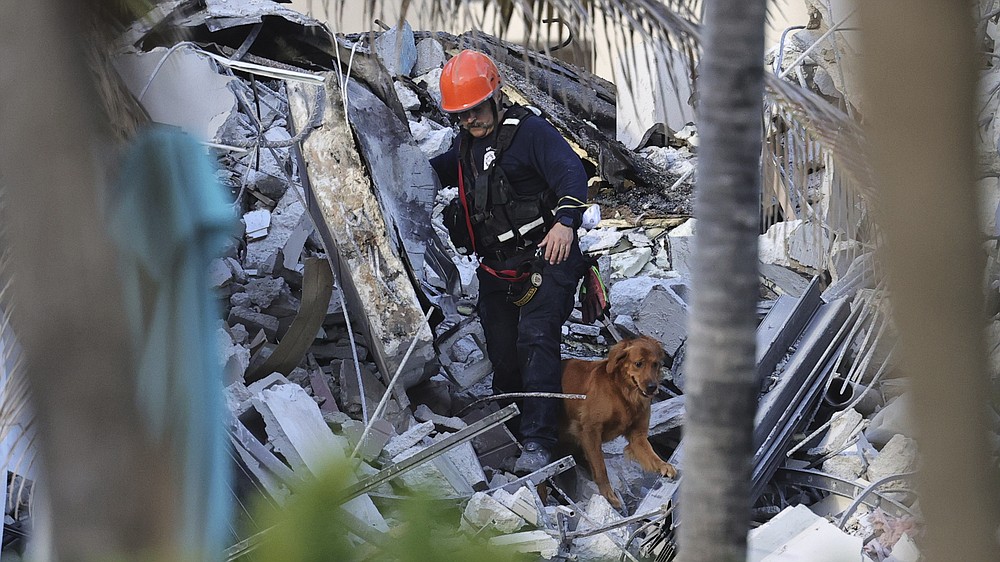 Fire rescue personnel conduct a search and rescue with dogs through the rubble of the Champlain Towers South Condo after the multistory building partially collapsed in Surfside, Fla., Thursday, June 24, 2021. (David Santiago/Miami Herald via AP) 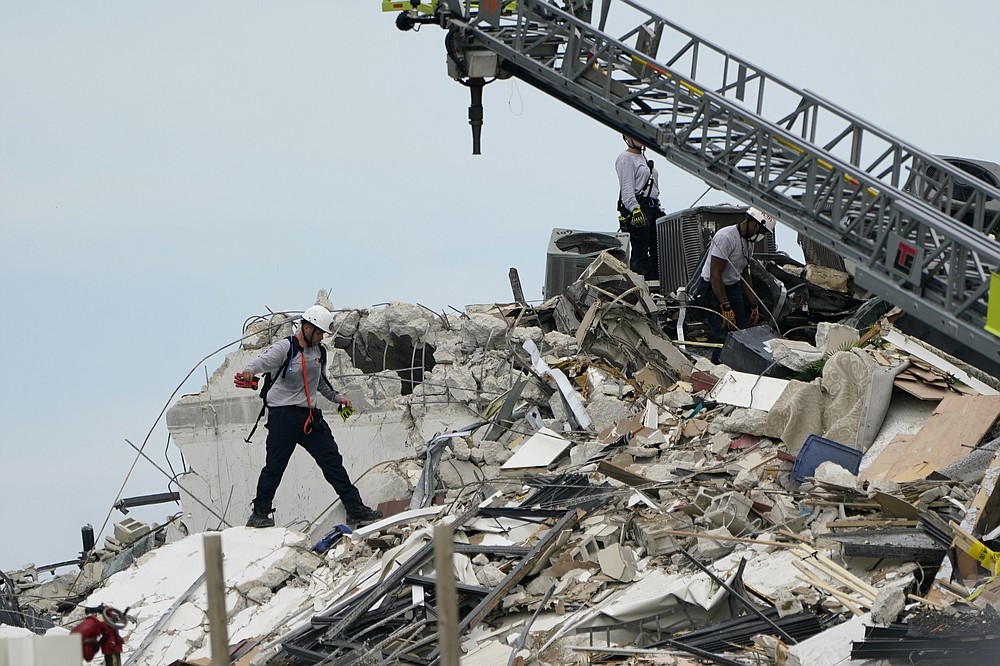 Rescue worker walk among the rubble where a wing of a 12-story beachfront condo building collapsed, Thursday, June 24, 2021, in the Surfside area of Miami. (AP Photo/Lynne Sladky) 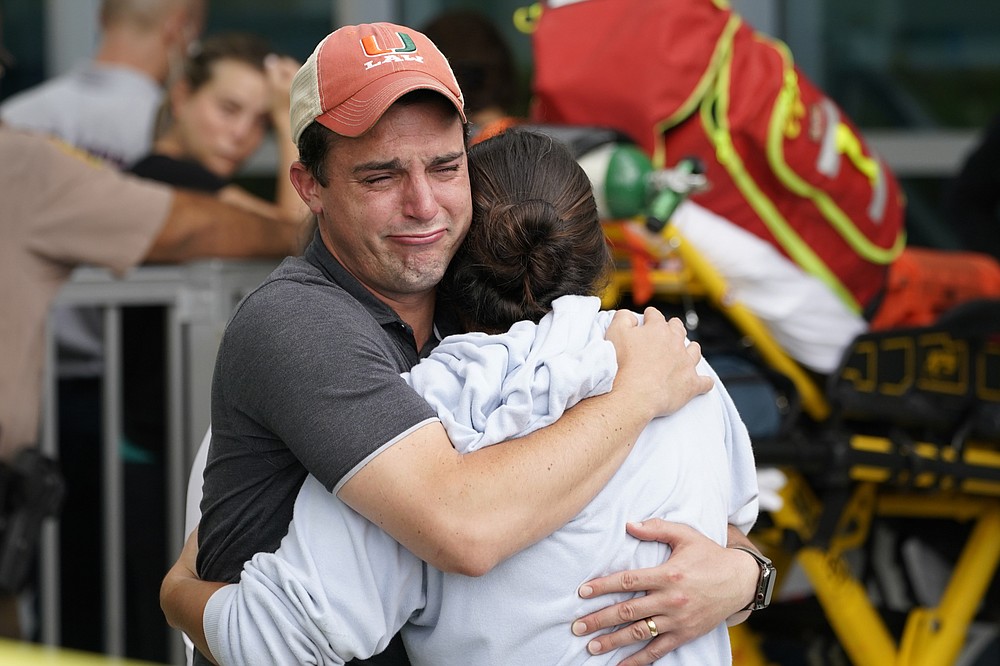 A couple embrace as they wait for news of survivors from a condominium that collapsed, Thursday, June 24, 2021 in Surfside, Fla. Dozens of survivors were pulled out, and rescuers continue to look for more. (AP Photo/Marta Lavandier) 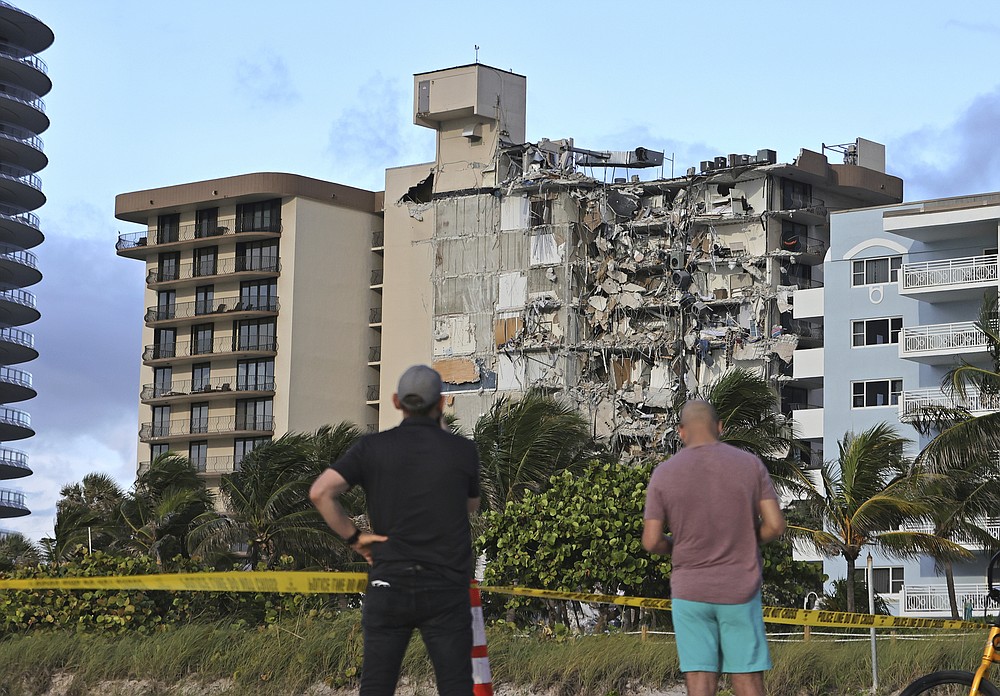 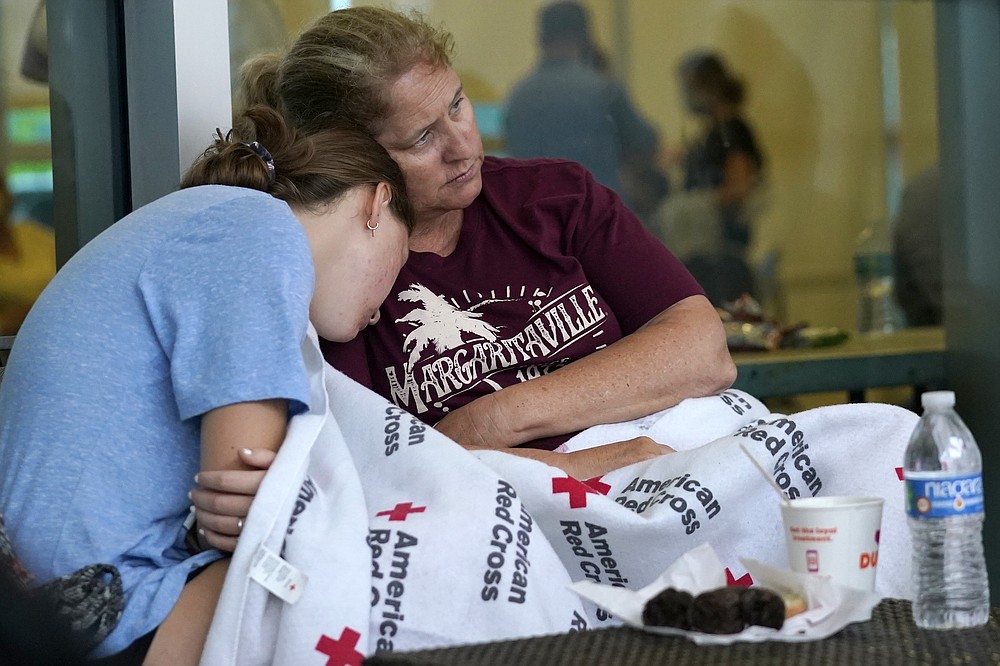 Jennifer Carr, right, sits with her daughter as they wait for news at a family reunification center, after a wing of a 12-story beachfront condo building collapsed, Thursday, June 24, 2021, in the Surfside area of Miami. Carr and her family were evacuated from a nearby building. (AP Photo/Lynne Sladky) 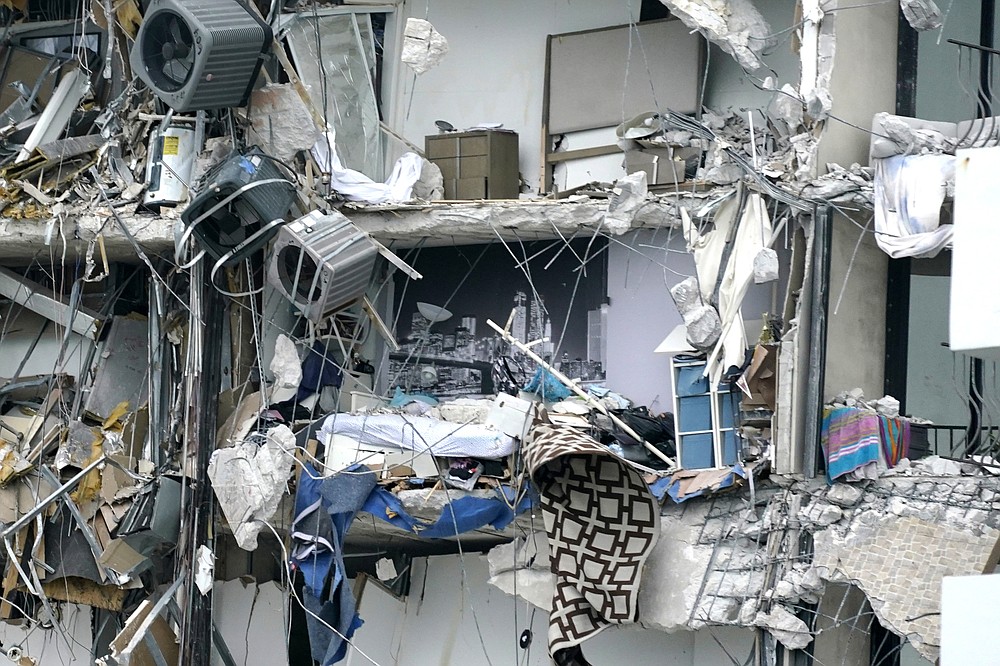 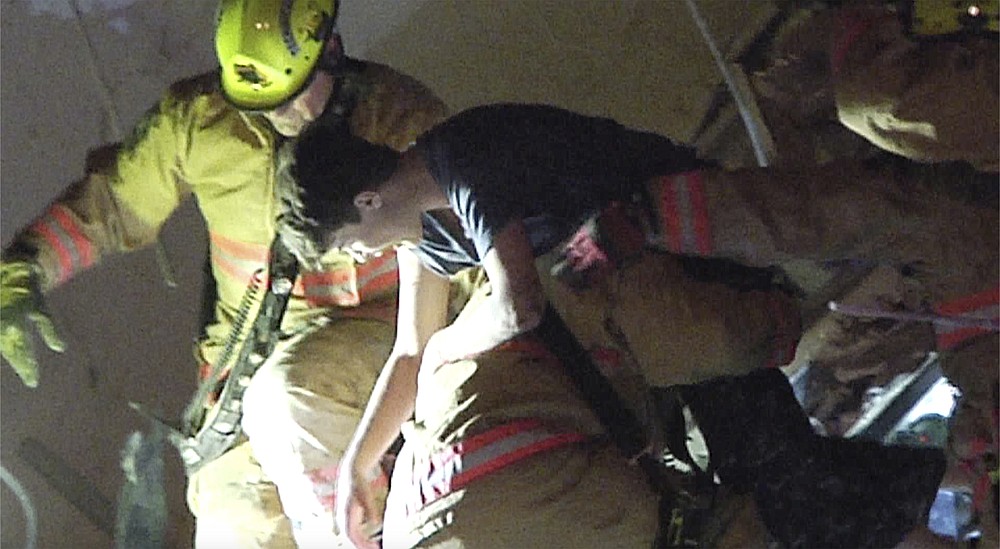 This photo taken from video provided by ReliableNewsMedia firefighters rescue a survivor from the rubble of the Champlain Towers South Condo after the multistory building partially collapsed in Surfside, Fla., early Thursday, June 24, 2021. (ReliableNewsMedia via AP). 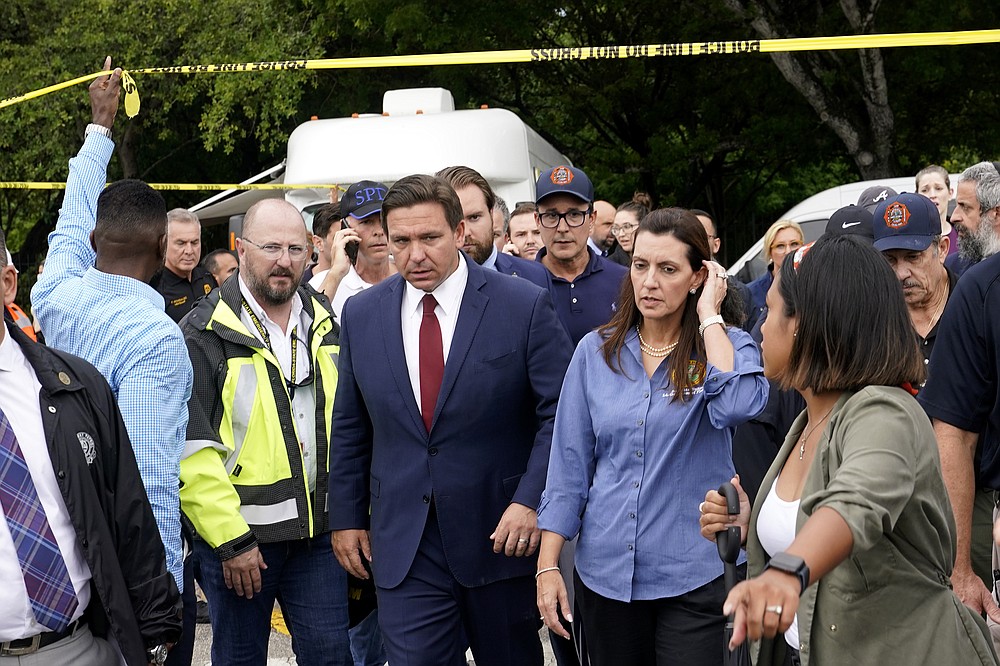 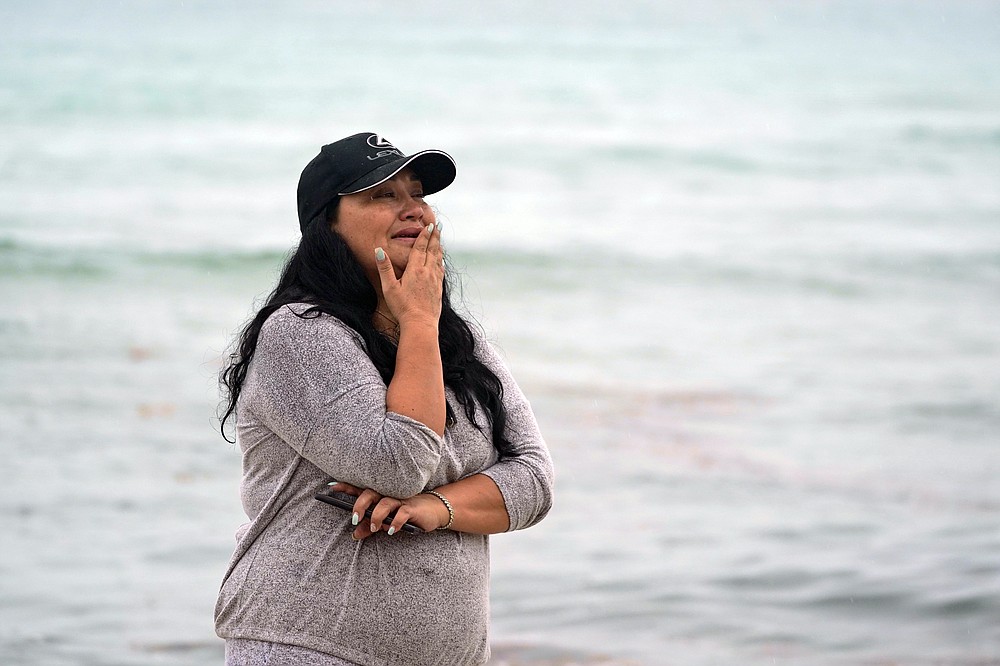 A woman reacts as she looks at a partially collapsed building, Thursday, June 24, 2021, in Surfside, Fla. A wing of a 12-story beachfront condo building collapsed with a roar in a town outside Miami early Thursday, trapping residents in rubble and twisted metal. (AP Photo/Wilfredo Lee)