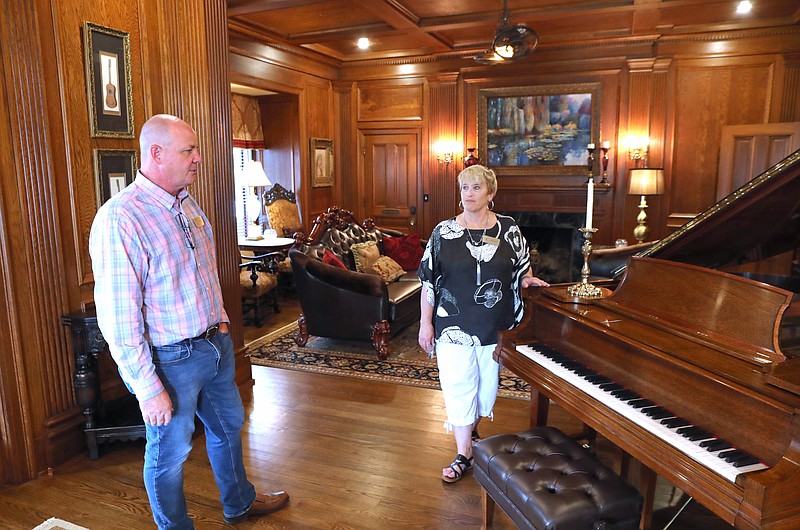 Mark McMurry, left, and his wife, Rhonda, give a tour of The Reserve at Hot Springs Thursday. - Photo by Richard Rasmussen of The Sentinel-Record

The peculiarities of the Gilded and Jazz ages don't comport with modern luxury, but the new owners of the Brown Mansion have resolved to impose modernity on the late 19th century home while honoring its past.

The Reserve at Hot Springs is the culmination of owner and hosts Mark and Rhonda McMurry's vision for the National Register of Historic Places site at 2330 Central Ave. They plan to open the bed-and-breakfast/boutique hotel/event venue in August, showing guests that modern luxury and old world charm aren't mutually exclusive.

"We want it to still feel period, but at the same time you have to have modern conveniences," Mark McMurry said. "You want people to feel comfortable when they come here."

"You want it to feel like a home," Rhonda McMurry added.

The couple also bought the adjacent property Dr. Frank Burton owned. Now called Legacy House, the five-bedroom home will be a satellite property of The Reserve.

The Arkansas natives returned home after living in Puerto Rico for more than a decade. They were looking for a new challenge after selling their business, Independent Pharmacy Management Services, in 2019. It wasn't long before they acquired the Brown Mansion from their friend Rick Williams' real estate company, Summit Properties.

"(Williams) has been our biggest fan," Mark McMurry said. "He loves this house."

He said W.C. Brown converted the Queen Anne-style home to Classical Revival when the lumber baron moved to Hot Springs more than a century ago.

"The Browns added the wings to it and gave it a more stately appearance," Mark McMurry said.

The back staircase to keep servants out of view, and separate rooms for Mr. and Ms. Brown to receive guests, are vestiges of late 19th and early 20th century America's class and gender divisions.

"It feels more masculine on that side of the house and more feminine on that side," Mark McMurry, referring to the two sunrooms flanking the wood-appointed walls of the living room, said.

"We tried to keep that feel. I don't know if this is true or not, but I've been told Mr. Brown was on this side and Ms. Brown was on that side. They each had their own entrance. I've heard if you were invited to the house, depending on whom you were coming to see, you would enter and be announced. They were very formal."

A spring storm brought down a 200-year-old oak tree, knocking a hole in the attic. That the house was otherwise unaffected showed its 1890s bones are still sturdy.

Putting a luxury bathroom in each of the six bedrooms was a challenge.

"Back at the turn of the century, you didn't have bathrooms for each bedroom," Mark McMurry said. "We had to cut through the old-timey plumbing and electrical. It's been a yearlong project. Every room has its own luxury bathroom without compromising the house. We had to figure out a way to make it look like the bathrooms were originally there."

The living room's 1920 Steinway player piano is one of numerous antiques the McMurrys brought to the house. Other pieces were curated by interior designer Julie Nichols, who was tasked with finding antique and replicas that honor the aesthetic of the past without compromising modern comforts.

"I think our designer Julie Nichols found the right mix of pieces that are comfortable but feel like the period of the house," Mark McMurry said. "We didn't know where any of this stuff was going to fit. We just gathered it all up, and Julie is great at placing. She knows how to place things so you don't get claustrophobic. She really captured what we had in mind."

The commercial kitchen being built in the carriage house behind the mansion is a concession to the limitations of the main house. It's too small for a large kitchen, so the McMurrys planned to prepare food at the Best Cafe & Bar and bring it to The Reserve.

When that proved impractical, they turned to the carriage house. The kitchen will be on the first floor, and Executive Chef Josh Garland will live on the second floor and serve as innkeeper. He's also the executive chef at The Best Cafe & Bar. He and the culinary team he recruited from south Florida, Las Vegas and other metropolises will bring their talents to The Reserve when the cafe closes at 2 p.m.

"Josh goes back a long way with our family," Mark McMurry said. "He hung out at our house. He and my son Nathan played football in high school. He's like our son. He's a very talented chef. The cafe has taken off and become a real success."

For an additional charge, Garland will cook dinner for guests who want to have their evening meal at the property.

"We're going to be very responsive to what the client wants," Mark McMurry said. "It's going to have the warmth of an inn, but it's going to feel like a high-end hotel."

The barn behind the carriage house has been converted to The Enclave, a honeymoon suite featuring pine walls and original floors that lend a more rustic look than the aesthetic of the main house.

"It's a totally different feel, but it has those luxury things: the copper bathtub, fireplaces, vaulted ceilings," Mark McMurry said.

The greenhouse attached to the barn will be an event venue.

"The chandeliers and glass make it very beautiful at night," Mark McMurry said.

Lights illuminating the grounds create the effect of a full moon every day of the month. Down lights fall on the front lawn's horse statue, and up lights cast a glow into the tree canopy for guests enjoying the night air from the main house's double veranda.

The McMurrys' youngest son, Andrew, was recently wed in the low area where Ms. Brown had her garden. A water feature was added to the amphitheater setting, and the stage light on the tree overlooking the area puts newlyweds in the spotlight.

"It was getting dark when they started to dance," Mark McMurry said of his son's wedding. "The tree lit up and hit the water feature. It was just a magic moment."

The convergence of the past with the modern is reflected in The Reserve's multigenerational staff. The Baby Boomer McMurrys will greet guests in the morning, bringing coffee to their rooms and helping them plan their day. The culinary staff preparing the two-course gourmet breakfast at 8 a.m., 9 a.m. and 10 a.m. sittings are part of the Millennial and Generation Z cohorts.

Son Nathan and his wife, Katelyn, are The Reserve's property manager and managing director. The McMurrys' other son, Seth, is the business' social media maven.

"This is our legacy project," Mark McMurry said. "Rhonda and I will be right in the middle of it working with these young people." 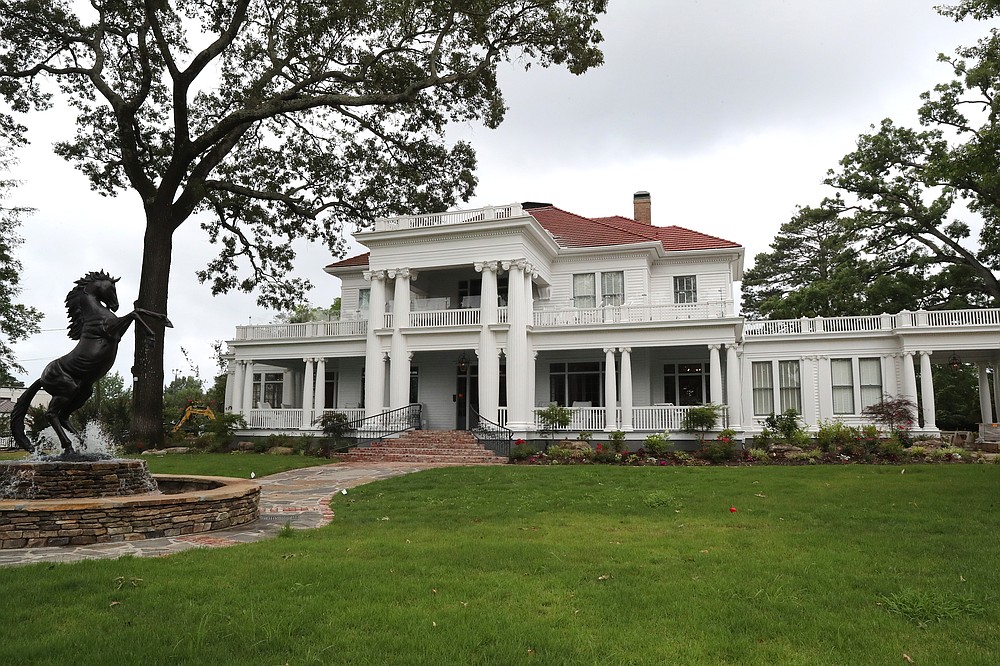 The Reserve at Hot Springs will offer luxury lodging in the historic Brown Mansion. - Photo by Richard Rasmussen of The Sentinel-Record 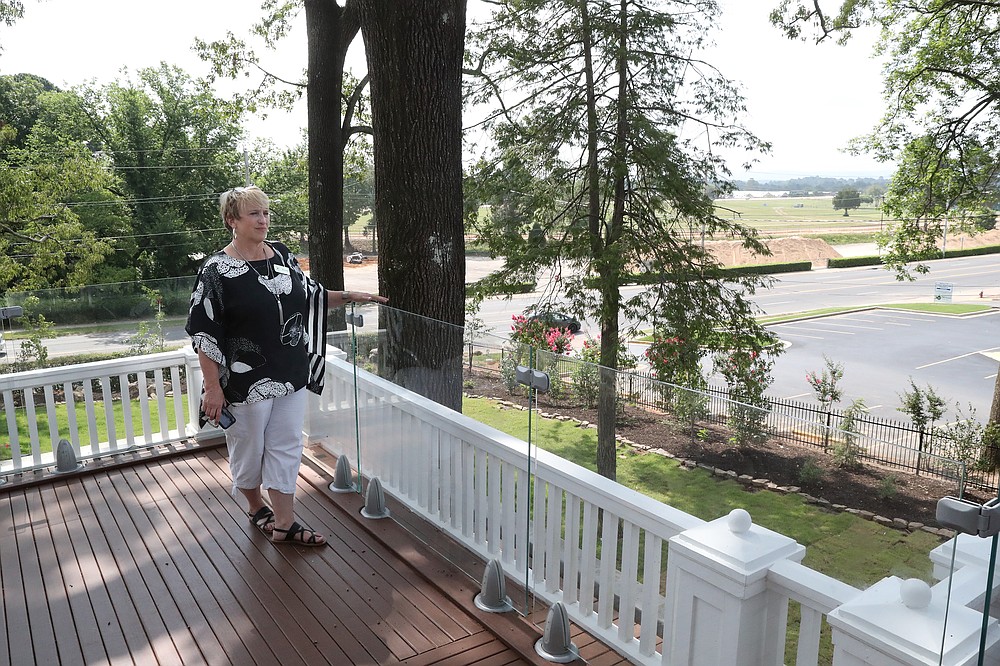 Rhonda McMurry enjoys the view from The Reserve at Hot Springs’ second-floor veranda. - Photo by Richard Rasmussen of The Sentinel-Record