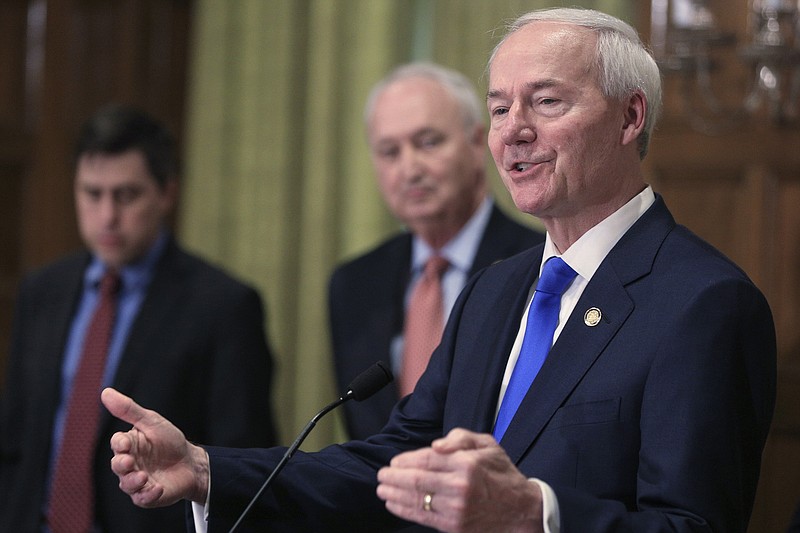 FILE - In this March 23, 2020 file photo, Gov. Asa Hutchinson, right, speaks in Little Rock, Ark. Hutchinson said Sunday, Feb. 21, 2021, he will not back former President Donald Trump if he runs for the White House in 2024, saying “it’s time” to move on to different voices in the Republican Party. (Staton Breidenthal/The Arkansas Democrat-Gazette via AP, File)

Proposed legislation would continue using Medicaid funds to place recipients on private health insurance. But, under the proposal, those who don't work or go to school could be moved to the traditional fee-for-service Medicaid program. More than 300,000 people are currently on the state's Medicaid expansion.

"No one loses health care benefits, but there are incentives to encourage that kind of behavior and that kind of progress in life," the Republican governor said at a news conference at the state Capitol.

The proposal was unveiled weeks after the Biden administration moved to roll back Medicaid work requirements in Arkansas and several other states. Arkansas' requirement had already been halted by a federal judge, and an appeal was before the U.S. Supreme Court.

Arkansas' majority-Republican Legislature approved the hybrid Medicaid expansion in 2013. Reauthorizing the program annually requires a three-fourths vote in the Legislature, a hurdle supporters have struggled to overcome in some years.

The proposed changes would have to be approved by the federal government if enacted by the Legislature. Hutchinson and supporters said the proposal would bring in $3 billion more in federal spending over the next five years to the state rather than using the traditional fee-for-service model for the expansion. Switching to fee-for-service would result in $310 less in state and local tax revenue over that time period.

"These dollars are essential to keeping our rural hospitals and our health care infrastructure in tact and stabilized, Republican Sen. Missy Irvin, a sponsor of the legislation, said.

The proposal includes other changes, including a home-visiting program for at-risk moms and a new program to connect young adults in targeted populations such as veterans and former foster children with community organizations.

Experts said Arkansas will have to explain how the incentive approach wouldn't penalize people who would get moved to the traditional fee-for-service program.

"You can call it an incentive, but really given you're starting in the private (insurance) it seems more like a penalty," Judy Solomon, senior fellow with the Center on Budget and Policy Priorities, said.

Many of the details for the incentive would be worked out in the coming months if the Legislature approves the proposal, Department of Health Secretary Cindy Gillespie told reporters.

The approach would not include a monthly reporting requirement like the state had in its past work mandate.

Under a timeline released by by DHS, Arkansas would submit its proposal for the new expansion program to the federal government by July if the program is approved by the Legislature.

The approach is unlikely to win over some conservative opponents of the expansion. Republican Rep. Josh Miller, who has opposed the expansion, has filed competing legislation that would move the expansion to a traditional fee-for-service model.

"I'm ready to quit fighting the fight over having the program and let's find a way to do it the most affordable, efficient way possible, and I don't think continuing to pad the pockets of the insurance companies is the best way to do that," Miller said.