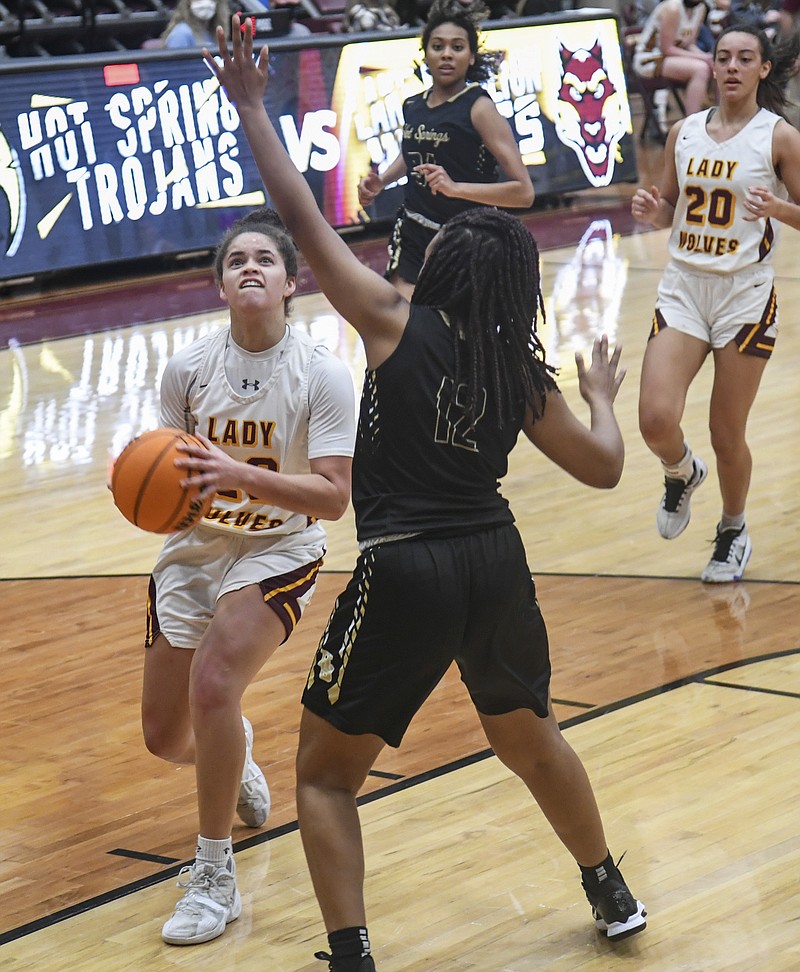 Lake Hamilton's Hayleigh Wyrick (23) drives in for a shot as Hot Springs' KaLariya McDaniel (12) looks to block in Tuesday's game at Wolf Arena. The Lady Wolves won 56-34. - Photo by Grace Brown of The Sentinel-Record

PEARCY -- A stable and consistent defensive effort from Lake Hamilton allowed the Lady Wolves to push out to a 30-14 lead at halftime over Hot Springs en route to a 56-34 win in the 5A-South semifinals at Wolf Arena Tuesday.

"(Hot Springs) has a couple girls who can score and put the ball in the hole, and we just knew, as a team -- 'Hey, here's the game plan. We've got to execute this game plan,'" said Lake Hamilton head coach Blake Condley. "I'm so proud of the girls for listening in practice and going through our film sessions and then bringing what we talked about into the game. These girls have had a goal of winning a conference championship, and we didn't get to finish regular season. I feel like the girls are locked in. They're motivated."

The Lady Wolves quickly got to work in the opening quarter, garnering an early 6-0 lead behind senior Aspen Thornton and junior Hayleigh Wyrick before senior KaLariya McDaniel cut the deficit with a 3-pointer. Another 6-0 spurt stretched out the Lady Wolves' lead to 12-3 as Hot Springs struggled to get to the basket, but senior Jaylia Reed found an opening for a layup with 1:15 on the clock.

After a shot in the paint from the left wing by Wyrick, Thornton sank a pair of free throws and a 3-pointer for a 14-point lead. With 5:45 to go until halftime, Hot Springs responded as Reed planted a set of free throws, and freshman Praylin Jones converted a 3-point play to pull within 19-10.

Junior Ginny Higginbotham connected with Thornton at the arc, and senior Jurnee Hicks nailed a bucket off a Reed assist to keep pace. Lake Hamilton's execution sped up slightly a few minutes later as Thornton got fouled on a bucket, missing the and-one. Classmate Tia Mullenix grabbed the rebound which led to Winfrey banking in a shot inside off an inbound pass from Higginbotham. Finishing out the first half on a 5-2 run, Lake Hamilton left the court at intermission with a 16-point lead.

"(Lake Hamilton's) defense was great tonight," said Hot Springs head coach Josh Smith. "They executed their plans, and it gave us fits. We continued to fight. Proud of our effort, and it's nothing to drop our heads about. Keep competing, that's all I ask for."

Returning to the floor, the Lady Wolves did not slow down as they opened the second half on a 7-0 run until Reed put in a layup to stop the bleeding. Thornton continued to light up the scoreboard for the Lady Wolves, drilling a trey followed by a 3-point play on the next posession to push out to a 45-18 lead.

Mullenix tacked on a pair of free throws with 1:25 left in the third as Reed capitalized on a defensive play from a teammate for a layup and another bucket to close out the period down 47-22.

Despite the Lady Wolves lead, Hot Springs kept on fighting into the final stanza with a putback and a steal by Reed that allowed her to drain a trey. Hicks found her way to the basket before Wyrick ended the run with a shot off the board for 49-29 with Lake Hamilton closing out the game on a 7-4 run.

"We've still got one game, and it'll be tough on Thursday to beat Lakeside, but I trust our girls that they're going to be ready," Condley said. "That's what I told them before the game. We've played however many games so far this year, and I feel like they've been ready every time they've stepped out there. I'm just trying to trust them -- that they're ready, and I'm gonna try to prepare them as best we can and see if we can try to get our third championship in a row."

Thornton led the Lady Wolves with 27 points, three rebounds, an assist, two steals, and a block. Wyrick added 14 points, five boards, an assist and a steal.

Lake Hamilton will advance to the finals and host Lakeside Thursday at 6 p.m while Hot Springs travels to Sheridan. 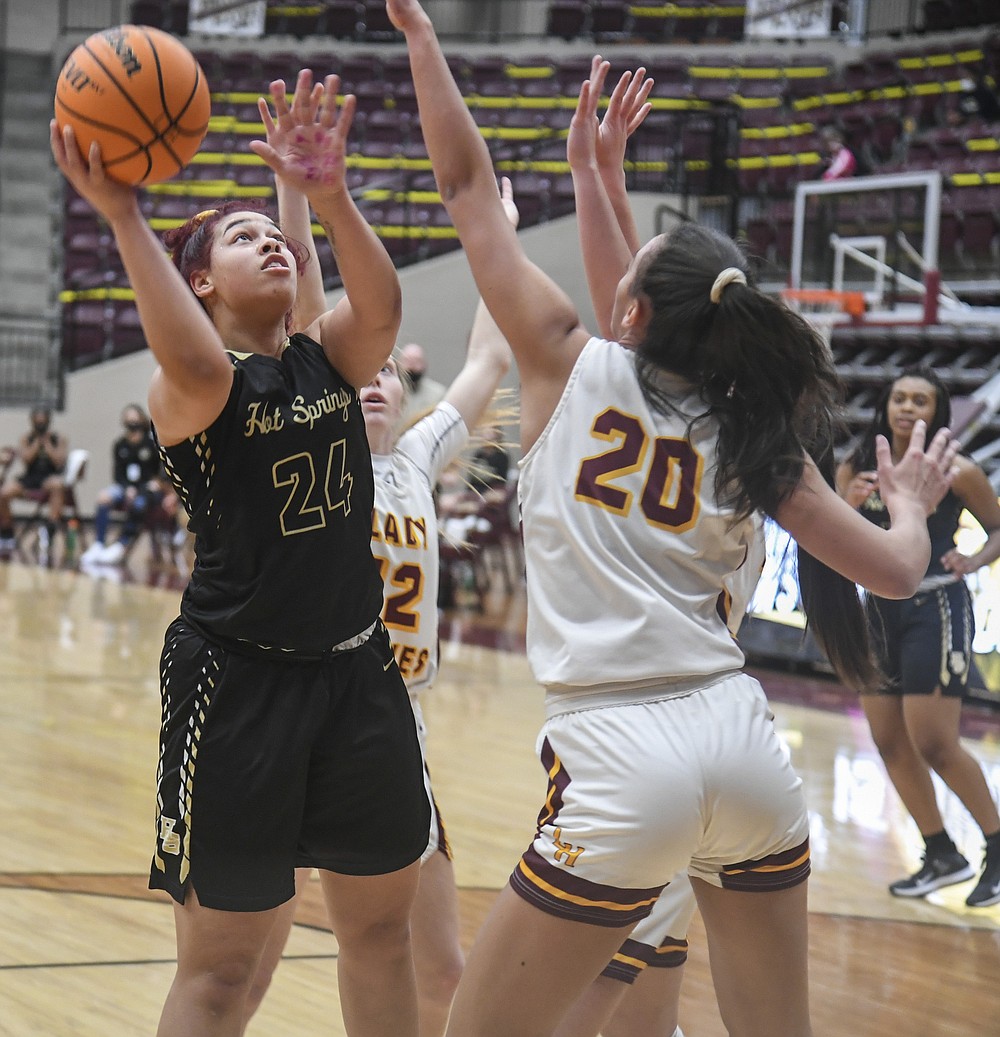 Hot Springs' Jurnee Hicks (24) takes a shot while under pressure from Lake Hamilton's Audri Winfrey (20) in Tuesday's game at Wolf Arena. - Photo by Grace Brown of The Sentinel-Record
ADVERTISEMENT