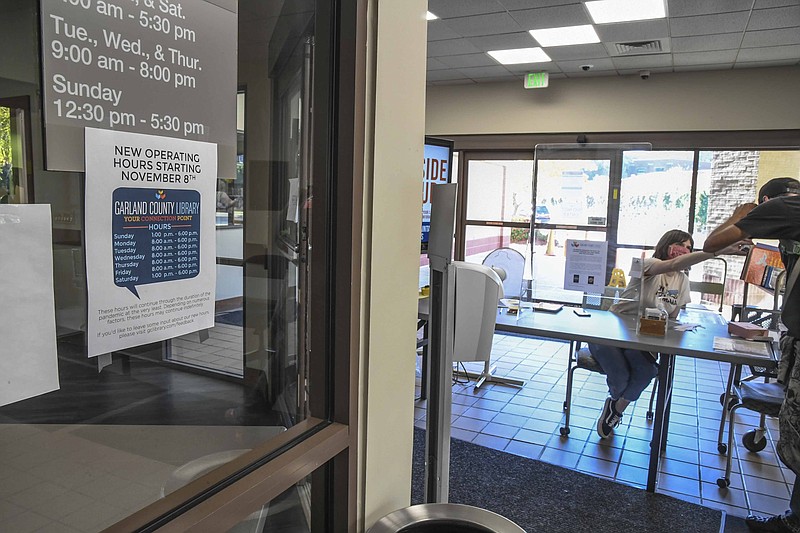 Mallory Golden checks the temperature of a patron entering the Garland County Library in October 2020. File photo by The Sentinel-Record

The Garland County Library and the Oaklawn Center on Aging are asking the public to write brief letters to local senior citizens throughout March as part of their Send Some Love Project.

"The goal of this project is to provide meaningful connections through written letters for Hot Springs' homebound neighbors and those in assisted living facilities," a news release said.

"According to the National Institute on Aging, social isolation and loneliness can be a contributor towards other illnesses and mental health issues. Efforts can be taken to connect with those living in more isolated circumstances; a gesture as small as kind words from a stranger can help improve a person's day," the release said.

The project was started by Brook Olsen, the library's children's programmer.

"I'd been hearing about how a lot of people are isolated," Olsen said, noting the older population has been particularly affected during the pandemic.

"I was thinking of ways to reach them," she said. "I had friends sending a lot of letters and cards on their birthday. (This project is) taking that idea and pushing it out into the community."

These letters will be "from one stranger to another," Olsen said, noting that for safety reasons "it's better to remain vague" on who is writing the letters. Those both writing and receiving letters "all will be strangers," she said.

People of all ages can participate, she said, but noted, "it's a great writing exercise for kids."

Learning to read and write is the "ultimate gateway" to all successes, she said, and this project "is a learning experience" for children, as it teaches them the steps of how to mail a letter.

Letters can "share a memory or tell a joke, just something entertaining for them to read," Olsen said.

The library is partnering on the project with the Oaklawn Center of Aging which will disperse the letters and notes in early April after they are all collected at the end of March. Olsen noted April is National Letter Writing Month.

Notes can be handwritten and mailed to the library at 1427 Malvern Ave., Hot Springs, AR 71901, placed in the outside book return at the library or submitted via a form found at https://www.gclibrary.com. A template can also be found on the library's website.

Letters mailed to the library must be addressed to Garland County Library C/O Send Some Love Project.